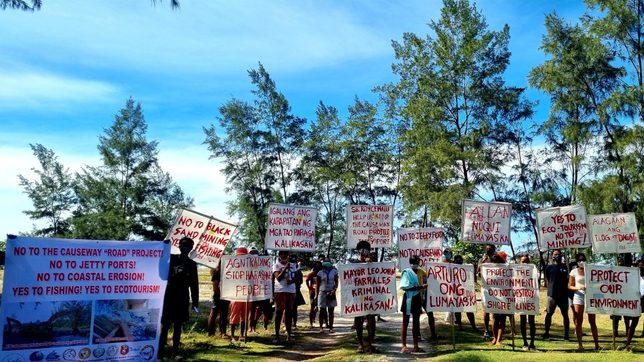 PROTEST. Members of the Save Zambales Kalikasan Movement protest against a causeway and jetty port project on December 16.

ZAMBALES, Philippines – Organized environmentalists and residents have called for the immediate suspension of the construction of a road on an upper point of an embankment across a creek and a jetty near the boundaries of San Felipe and San Narciso towns here for posing threats to the environment and due to questions on the legality.

The group, Save Zambales Kalikasan Movement (SZKM), also demanded a halt to what it alleged as ongoing dredging operations at River Alusiis, a claim a local official strongly denied were taking place.

The causeway, jetty, and dredging projects are being undertaken by AGN Trading Company, owned by Allan Nuqui, and Mines Flowing Corporation to “rehabilitate” the creek which leads to the West Philippine Sea.

Those opposed to the undertaking staged a demonstration on Thursday, December 16, to protest the projects which they said were illegal and destructive.

SZKM, a group composed mostly of environmentalists, fisherfolk and other residents, and resort and restaurant owners, said the projects were started in early December even without public consultation.

Neither could the companies show permits and complete documents from the Department of Public Works and Highways (DPWH), Department of Environment and Natural Resources (DENR), Philippine Reclamation Authority (PRA), or the Philippine Ports Authority (PPA), according to SZKM president Ricardo Reyes.

Reyes’s group rejected assertions made by companies that the projects were “beneficial and necessary,” and would “mitigate flooding.”

Rather, the projects would have an adverse environmental impact, and eventually hurt the local economy and food security, he said.

“The government cannot change our local economy which is driven by tourism, fishing, and agriculture,” said Reyes.

SZKM said the companies secured an Environmental Compliance Certificate (ECC) on November 24 for the causeway project and a mayor’s permit from San Felipe on December 9.

The group said the jetty project skipped the normal legal process because it was started without a public hearing and dredging clearance, and its ECC was issued allegedly despite the absence of an environmental impact study as required by law.

San Felipe Mayor Leo Farrales denied that he issued a mayor’s permit. Neither were there dredging activities taking place in the area, he said.

Arturo Ong, the owner of the Mines Flowing Corporation, strongly denied allegations that they have no supporting legal papers.

Ong told Rappler on Tuesday, December 21, that they secured all the necessary permits and that they would proceed with the projects despite the opposition.

The causeway project would benefit townspeople in flood-prone areas in the village of San Rafael in terms of mitigation, he said.

(I have complete papers. I have an ECC, business permit – I have everything. Also, that area is a port zone. The River Alusiis they are talking about is a lie. That’s a creek linked to a river, and it’s not a river going out to the sea. I complied with everything and that’s why I was given a permit by the mayor, an approval from the barangay, and a resolution from the entire barangay and municipal councils.)

Ong also dared those questioning their legal right to develop the area to show proof of their assertion.

“He (Ong) has no right to put up a facility for mining that we, the community, do not allow. The issue is not the title but the environment and the local economy that his project will destroy,” she said. –Rappler.com

LIST: Who is running in Zambales in the 2022 Philippine elections?