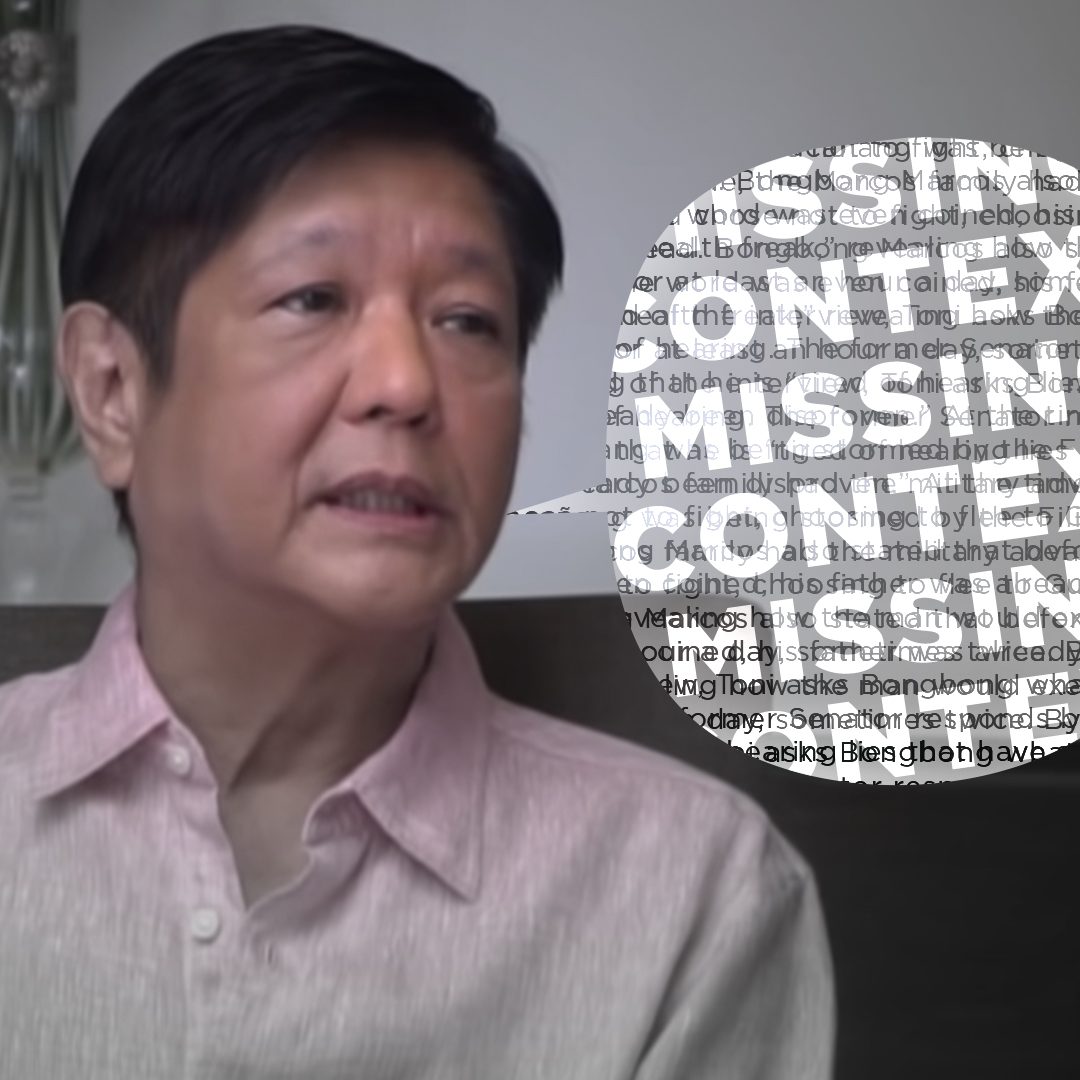 In a viral interview with actress Toni Gonzaga, former senator Ferdinand “Bongbong” Marcos Jr. spoke about his childhood in Malacañang, his family’s flight from the presidential palace amid the 1986 People Power Revolution, and his father’s death in Hawaii three years later.

The Toni Talks episode was uploaded to the actress’ YouTube channel on Bongbong’s birthday, Monday, September 13. It was also around a week before the 49th anniversary of Ferdinand Marcos’ declaration of Martial Law, a move that kept the Philippines under his rule for another 14 years on top of his two presidential terms.

The Martial Law period was fraught with human rights violations: around 70,000 people were imprisoned and 34,000 tortured, according to Amnesty International, while 3,240 were killed from 1972 to 1981.

Gonzaga’s interview was denounced by the Martial Law Museum on Wednesday for “whitewashing” the atrocities that occurred during this period.

Below, we provide context for five of Bongbong Marcos’ statements said during the interview.

Having a military advantage

STATEMENT: According to Bongbong Marcos, his family had the military advantage during the People Power Revolution.

Responding to a question on whether he was scared at that time, he told Gonzaga: “No, I wasn’t. I can’t say I was, because, militarily, we had an advantage. It’s just, he chose not to fight. And then they took us to Clark. When we got to Clark, dinisarmahan kame. Lumipad na kami sa Guam. (When we got to Clark, we were disarmed. We then flew to Guam.) Which is what happened.”

CONTEXT: According to a report by the Washington Post, Juan Ponce Enrile, who was the defense minister at the time, said that rebel forces held the helicopter strike group of the Air Force, which had been fully armed with rockets and machine guns. They also held four battalions of Philippine troops, each amounting to approximately 700 soldiers.

The Post reported that there were signs that control was slipping away from Marcos at the time, because officials at the presidential palace ordered employees to go home, as heavily armed marines patrolled the palace grounds.

The presence of these forces were largely due to the defections of Enrile and former Armed Forces of the Philippines chief-of-staff Lieutenant General Fidel Ramos. Rebel forces therefore were able to launch attacks on the Villamor Air Base as well as Malacañang Palace, destroying Huey helicopters and strafing Palace grounds, respectively.

There were also millions of Filipinos along EDSA keen on overthrowing the dictator and blocking his loyal troops from leaving Camp Aguinaldo. Retired Air Force Chief Lt. Gen. Antonio Sotelo shared how military groups slowly began to defect to the rebels in Camp Crame because of their refusal to harm civilians in the process.

Ferdinand Marcos was a ‘health freak’

STATEMENT: In a conversation about maintaining his health, Bongbong said his father influenced him to be fit: “It’s my father’s influence. My father was, before the term was invented, he was a ‘health freak,’ and he would exercise at least an hour a day, sometimes twice a day.”

CONTEXT: The Marcos administration was tenacious in hiding the former President’s failing health. Any speculation regarding his weakening was quickly dismissed as either mere cases of the flu or fatigue. The former dictator’s persistent ailment was therefore disguised with the promotion of a strong and health-conscious image in order to combat rumors. If Marcos wasn’t lifting weights, he was either jogging or sparring. If he was ever seen as tired, it would be refuted by allies and denounced as his being “at the peak of health.”

Marcos’ sickness crept up on him as early as 1979. The exact nature of this illness, however, was kept under careful wraps by Malacañang. Former Associated Press (AP) Manila editor Miguel Suarez only came to know about the existence of Marcos’s disease through opposition leader Benigno “Ninoy” Aquino Jr. It was only in 1985 when intelligence and congressional sources finally disclosed the illness to be systemic lupus erythematosus.

In the few months before Marcos’s ouster, the dissonance between his sickly appearance and the government’s constant assurance that he remained “strong” grew obvious, fueling Filipinos’ apprehension even more.

‘Lies’ about 1986 have been disproven

STATEMENT: Towards the end of the interview, Gonzaga asked Bongbong what he was tired of hearing. He responded, “Lies. I’m really tired of hearing lies that have already been disproven, not necessarily about my family, about me.”

When asked what his truth was, he said in a mix of English and Filipino: “And the truth is not what you’re saying. It’s entirely something else. Just think of the things that were being said in ’86, February, March, April. All the things, ‘we discovered this,’ all of them have been proven as lies. But people still insist that it’s shady, fine, that’s your business.”

CONTEXT: The Marcos family has won and lost several cases regarding their ill-gotten wealth and human rights violations both in the Philippines and abroad.

For instance, the US District court in Hawaii in 1995 ruled in favor of 9,539 Martial Law victims in a class suit. They sought damage or reparations from the Marcoses for human rights violations and the court awarded $1.96 billion to the claimants. The US 9th Circuit Court of Appeals backed the Hawaii court’s decision in 1996.

In another case, the Swiss Federal Supreme Court froze all of Marcos’ bank accounts in Swiss banks. In December 1990, the court ruled in favor of the transfer of these assets worth around $356 million to the Philippines. Seven years later, the court agreed that these funds were of “criminal provenance.”

Bongbong’s mother, Imelda Marcos, was found guilty of seven counts of graft in November 2018. This is out of the 10 charges involving Swiss-based private organizations she set up while in office. Aside from being the First Lady, Imelda was also the governor of Metro Manila from 1975 to 1986. (READ: Imee, Bongbong Marcos were beneficiaries of illegal Swiss foundations)

However, Bongbong Marcos often denies in interviews the existence of his family’s “ill-gotten wealth” as well as the plunder, massive corruption, and human rights violations that occurred during his father’s 20-year rule.

‘Into the modern world’

STATEMENT: Bongbong Marcos said he would introduce himself to the new generation this way: “I’m the son of the longest lasting president who brought the Philippines into the modern world.”

He said that the most important part of his father’s legacy was not the roads he had built, the educational system or the medical system, but bringing a sense of nationhood to Filipinos.

CONTEXT: The Philippine economy fell during the latter part of Ferdinand Marcos’ rule. Lies about his achievements in infrastructure and education persist have been proven exposed.

The Philippines’ Gross domestic product and GDP per capita began to fall in 1977. From a record high of 8.9% in 1973, the country’s GDP growth rate plunged to a record low of -7.3% in the last two years of the Marcos administration. Economists say that this decline caused the Philippines to lose two decades of development. It also led to the Philippines becoming the “sick man of Asia.”

Meanwhile, on social media today, netizens continue to claim, among other things, that Imelda Marcos did not spend government funds for her pet infrastructure projects, that Ferdinand Marcos planned Skyway Stage 3, that no president after Marcos had mass transit projects, and that no state universities and colleges were established after the Marcos administration. These have all been proven false.

(That’s really how it is, that is the life of a politician, you cannot do anything about it, you really can’t avoid that. Even the most popular, our president now, if you look at the surveys, his popularity and approval ratings, all of them are still so high, but there are still people who are angry with him.)

CONTEXT: Duterte does continue to enjoy high ratings despite his government’s failing pandemic response and human rights abuses. However, political observers and veteran journalists have attributed these to a “fear factor,” that has possibly pushed respondents to give him a thumbs up.