MANILA, Philippines – President Rodrigo Duterte’s so-called war on drugs is as intense and bloody as ever – but its epicenter has moved.

While cops in Metro Manila have reported a drop in deaths in their anti-drug operations, policemen from the neighboring Central Luzon region have recorded more than one death per day.

In one August 2018 anti-drug sweep in the province of Bulacan alone, 8 drug suspects were left dead. No different from the usual disclaimer of cops, those who were killed all allegedly resisted arrest and fought back. And as bloody as 8 dead in a night already is for cops, it is only part of a much bigger death count.

Philippine National Police (PNP) data obtained by Rappler shows that in the year 2018, 29.6% of all drug suspects who were killed in police operations in the Philippines came from Central Luzon alone. The region saw 542 kills.

The number dwarfs the 2018 record of Metro Manila, the region for so long believed to be the site of most deaths in the anti-drug campaign. The National Capital Region recorded only a little more than half of Central Luzon’s figure: 285 killings, accounting for 15.57% of drug operation kills in 2018.

The drop in the number of deaths in Metro Manila drug operations, in fact, also led to its other neighboring region Calabarzon to overtake it in the death tally. Calabarzon, the metro’s southern neighbor, claimed 391 kills.

For policemen, the rise in deaths simply indicates a rise in the users of drugs.

In an interview with Rappler, Central Luzon police chief of staff Senior Superintendent Rhoderick Armamento explained that the region racked up more killings simply because police have tracked down more drug suspects, and they chose to fight back (“nanlaban“).

“Legitimate talaga ‘yung ginawa ng kapulisan natin. Pinagtanggol lang nila ang sarili nila dahil nanlaban, ayaw magpahuli nang buhay (What our policemen did really was legitimate. They only defended themselves because the suspects fought back, they did not want to be caught alive),” Armamento said.

With the consistent rise of “nanlaban” cases in Central Luzon, 3 years sufficed for a reversal: During the first months of the police’s Project Double Barrel from July 1 to October 25 2016, Metro Manila cops killed 625, while Central Luzon claimed 309 lives.

And even though Central Luzon surpassed Metro Manila’s kill count in the latest phase of the drug campaign – and could even go beyond the latter’s total if it retained its current kill rate – the seizure of illegal drugs in Central Luzon continues to lag behind.

While Metro Manila cops struggle to trace the whereabouts of drug suspects and drug pushers, Armamento proudly said the intelligence divisions of Central Luzon police have been “efficient” enough to produce a seemingly endless list of drug suspects with cases ripe for operation.

Their drug list continues to grow faster compared to other regions, Armamento said, also because their region is vulnerable to the illegal drug trade. Central Luzon is located directly above Metro Manila, which remains to be the main drug trafficking and manufacturing center in the country.

Bulacan: A province above the rest

In Central Luzon, there is one province more “vulnerable” than the rest, and where most of the killings in anti-drug operations in the entire region took place: Bulacan.

The home of the deadly one-time, big-time operations, Bulacan, saw the deaths of 827 drug suspects from July 2016 up to February 2019.

No Central Luzon province comes near the record of Bulacan, with Nueva Ecija, the province with the second highest kill record in the region, registering 281 deaths.

Pampanga, the province in the number 3 spot, has an even lower record of 124.

“I think this is even a small number, because those killed are the ones who offered violent resistance, committing a fault. They can’t be first to draw their guns on our policemen,” Bulacan police chief Senior Superintendent Chito Bersaluna said in Filipino.

He stressed other numbers they recorded to elaborate on his point. In the same period that over 800 drug suspects were killed, 8,941 suspects were arrested. Some 43,731 drug users also surrendered to them. Of these surrenderers, 6,317 have completed rehabilitation programs.

Bersaluna then justified the deaths, using the defense of his superiors since the anti-drug campaign started: “We already said this. If there is no violent resistance from the target of apprehension, then no one would die,” he said in Filipino.

A new home for ‘Manila boys’ 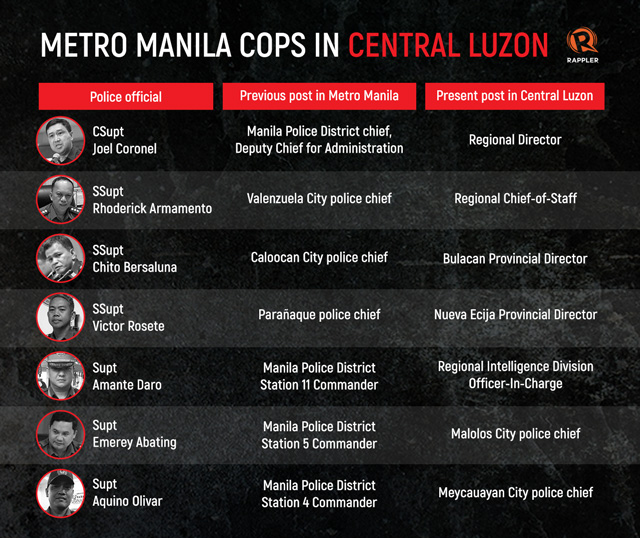 The exit of illegal drugs from Metro Manila has been accompanied by the exodus of cops to Central Luzon.

The most recognizable face of the region is the police boss himself, Chief Superintendent Joel Coronel, who headed the Manila City Police District during the peak months of Duterte’s anti-drug campaign.

Prior to the high kill records, Bulacan’s Bersaluna was the Caloocan City police chief when low-ranking cops killed defenseless teen Kian delos Santos in a rogue anti-drug operation in August 2017. He has since been cleared of criminal and administrative charges.

Coronel, meanwhile, is in the company of his former Manila police station commanders Amante Daro, Aquino Olivar, and Emerey Abating. Daro is the regional chief of intelligence, Olivar is the chief of the Meycauayan City police, while Abating is the top cop of Malolos City.

Coronel began leading PRO3 in November 2018, replacing Chief Superintendent Amador Corpus, who has since been promoted chief of the powerful Criminal Investigation and Detection Group.

Corpus is not the only former Central Luzon cop who has been rewarded with a high-level position after leading Central Luzon cops. Philippine Drug Enforcement Agency chief Aaron Aquino himself was the Central Luzon top cop during the first months of Duterte.

According to the Commission on Human Rights (CHR), they are currently overseeing 249 cases involving 300 victims of possible extrajudicial killings (EJKs) under the anti-drug campaign of Central Luzon.

“I do confirm, we here at the CHR have noted there is a spike [of cases] in Region 3. And this has been a burden to our regional office…We are overstretched,” CHR spokesperson Jacqueline de Guia told Rappler in a phone interview.

The accusations against cops remain the same: that the killed drug suspect was not a drug suspect, that the drug suspect did not fight back, and the sachets of drugs and stained pistols were planted.

According to Central Luzon police chief of staff Armamento, they have set up measures to bar mischievous cops from committing any wrongdoing, primarily requiring all anti-drug teams to be led by officers or officers with a lieutenant rank upwards, and allowing only registered drug enforcement units to operate.

Unfortunately for cops, these protocols have failed to stop the number of alleged EJKs from rising. For human rights observers, it’s just like Metro Manila all over again – just in another place, with new victims.

“It’s basically the same. Nothing extraordinary. It’s the sheer numbers, rate, and scale as compared to other regions that make it stand out,” CHR’s De Guia said. – Rappler.com