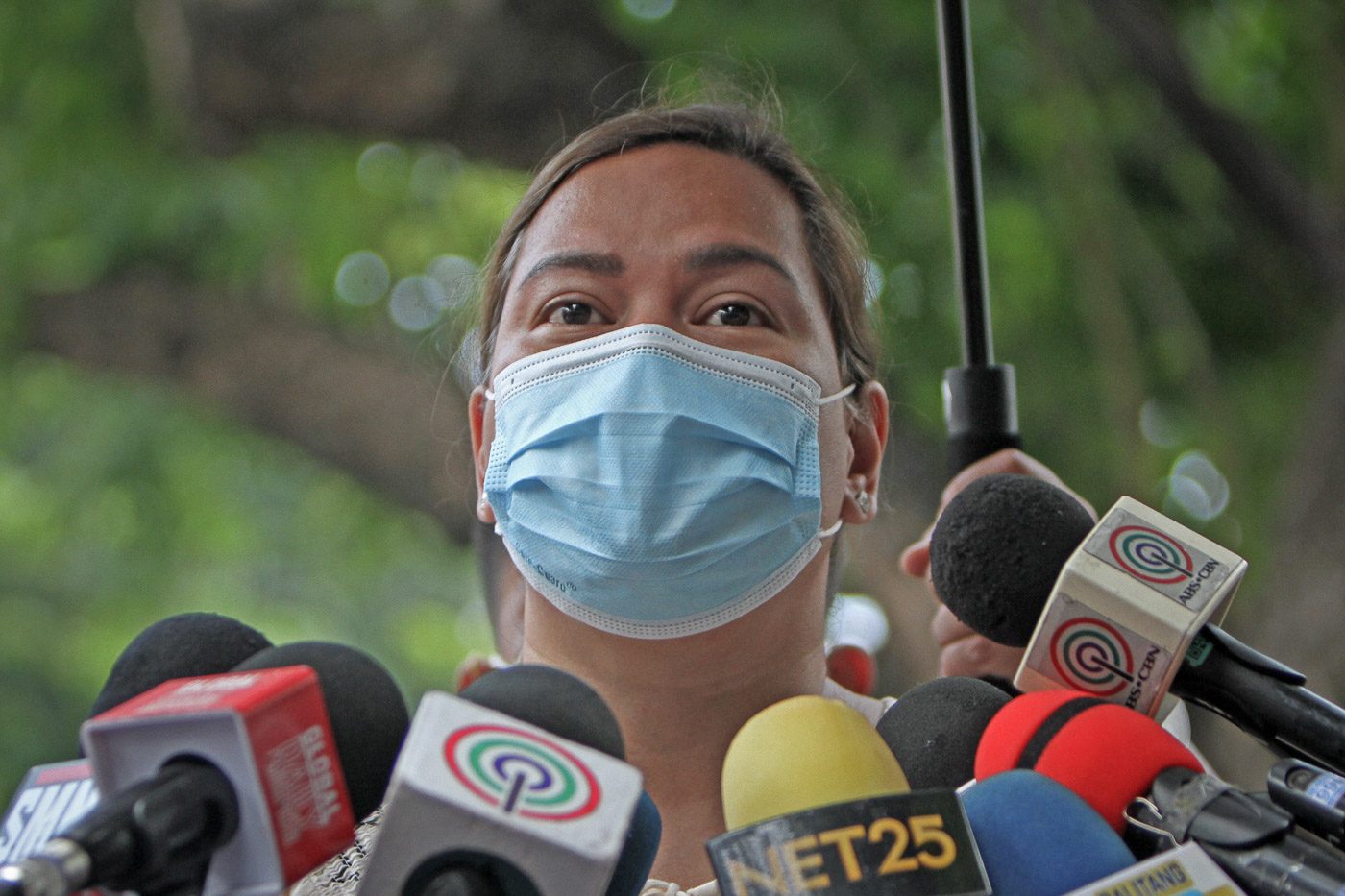 Vice President Sara Duterte answers questions from journalists outside the church of San Beda University in Manila on July 14, 2022.

Facebook Twitter Copy URL
Copied
What's the basis of Vice President Sara Duterte when she said she would fix the country's education sector in six years if given P100 billion more?

MANILA, Philippines – Just like her father, Vice President and Education Secretary Sara Duterte made a bold declaration about solving an important issue. The daughter, this time, vowed to solve education woes in the country should the Department of Education (DepEd) be given an extra P100 billion for its 2023 budget.

In front of lawmakers dominated by allies of the Marcos administration, Duterte said that she asked President Ferdinand Marcos Jr. to give her P100 billion more on top of the P710 billion of the DepEd under the National Expenditure Program (NEP).

“We talked to the President and told him that, ‘if you give me 100 billion, I will solve all the problems of basic education.’ And that is what I want to reiterate as well, to Congress and the House of Representatives, if you give me, give us, the people here sitting in front of you, P100 billion, we will be able to solve the problem in six years,” Duterte said during the House budget deliberations on September 14.

There were no objections from lawmakers when Duterte made the pitch. They swiftly ended the deliberations on the DepEd proposed 2023 budget in just two hours, with only seven lawmakers interpellating Duterte. In the past, big agencies, like DepEd, usually took eight to 10 hours to defend their budget. 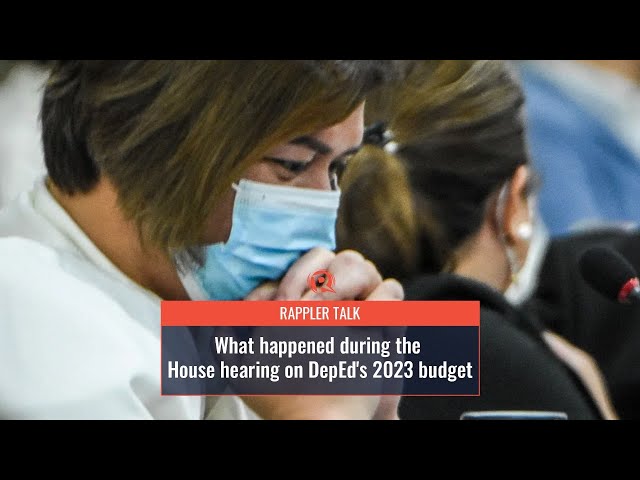 The Philippine Business for Education (PBED) said that while the 2023 proposed budget for DepEd was 4.3% of the Gross Domestic Product (GDP), it still does not meet the global standard of 6%.

“Much is at stake, and we cannot address our learning losses without sufficient resources. The government must also equip our teachers with the right skills and training and focus on programs that are student-centered,” PBED’s executive director Lovelaine Basillote said.

Deputy Minority Leader ACT Teachers Representative France Castro was among the seven lawmakers who were able to grill Duterte about the proposed budget. But she was disappointed by how it turned out since she didn’t get the answers she wanted to hear in terms of addressing the learning crisis.

For Castro, the P100-billion extra budget Duterte was asking for was “baseless.”

“I didn’t have the enough time to rebut that. So P100 billion is not enough for an education budget, in fact, in their presentation, they said it should be 6% of the GDP. Then why only P100 billion? If you are going to go by their presentation, 6% of the GDP is around P1.4 trillion, so this 100 billion is small so how did she come up with that amount?” Castro said in a Rappler Talk interview on September 16.

To head the agency tasked to fix the country’s education system would not be an easy job. Experts have said that the country’s poor education quality is a result of decades of neglect and underinvestment.

Educational psychologist Lizamarie Olegario said that it is difficult to check the feasibility of Duterte’s plan when she has not detailed yet what it is.

“Basically, how is she going to do it? She can’t just get the money then promise something without clear steps on how to address the complex problem,” said Olegario, also an associate professor at the University of the Philippines, College of Education.

Duterte has yet to bare her concrete plans for the education sector, except for adapting the Basic Education Development Plan (BEDP) 2030 that was actually prepared by the previous administration. It was the first long-term plan of the DepEd for basic education, covering formal education from 5 to 18 years old and non-formal education for youth and adults.

During an interview with Christian Esguerra’s Facts First, Basillote said that Duterte’s request for P100 billion more “matches” the financial plan that was reflected in the BEDP, which is at around P800 billion.

“In a way, it matches the plan. But as to whether it will really solve the crisis, I am not so sure. What does she actually mean by solving the problems in basic education? What does success look like to her?” Basillote asked.

During the DepEd’s budget deliberations at the House of Representatives, Duterte was asked why she was insistent on pushing for the mandatory Reserve Officers’ Training Corps (ROTC) instead of proactively solving the learning crisis.

The Vice President replied by saying that there are existing legislations for learning recovery, there was no law for mandatory ROTC.

(The primary legislative agenda of DepEd and President Marcis is making ROTC mandatory in Senior High School. So why is that? That’s why I asked, where is her concrete plans for our problems in reading comprehension because that is the pressing problem, right?)

The learning crisis in the Philippines

But what exactly are the problems that Duterte needs to solve as the sitting education secretary?

In her first few weeks as the DepEd secretary, Duterte issued a strong order mandating all schools to return to face-to-face classes, a move seen by advocates as crucial for learning recovery.

Despite a classroom shortage, the Vice President said that the school opening was a “victory.”

When classes opened on August 22, the country lacked 91,000 classrooms for the school year 2022-2023. To make up for it, class shiftings have been implemented and blended learning was allowed in some areas.

“P150 million can already procure 150,000 armchairs, or about three million textbooks, or 4,286 laptops for teachers at P35,000 per unit. It can go a long way in providing for the lacking learning and teaching materials that hamper education recovery,” said Alliance of Concerned Teachers (ACT) chairperson Vladimer Quetua.

But school infrastructure is just part of the bigger problem, global assessments showed the dismal performance of Filipino students in school. For instance, 72% of students aged 15 years old were “low achievers” in Reading, Math, and Science in the 2018 Programme for International Student Assessment (PISA).

Dr. Ed Fermin of the National Teachers College pointed out that learning poverty in the country is exacerbated by overworked teachers who have to perform tasks other than teaching.

“If Vice President Sara Duterte will be true to what she said that she would lessen or remove the administrative functions of teachers so they could focus and concentrate on assessing and delivery of learning, I think that would be a good way to jumpstart the system and make sure that teachers really spend more time looking at how are our learners coping,” he said.

While Marcos said a lot of promising policies for the education sector during his first State of the Nation Address, teachers’ welfare was left out. Teachers have been asking the government for a salary raise to no avail.

Duterte said that increasing their salaries would encourage private school teachers to migrate to public schools, which may trigger the closure of more private schools. Based on DepEd data, some 425 private schools have permanently closed since 2020.

During a television interview, Olegario stressed the connection of malnutrition with having quality education. She said that this can be resolved if the Philippines would have a sustainable nationwide feeding program.

(We have high level of malnutrition. One of four Filipino children are malnourished. That’s contributing to the low intelligence quotient of students.)

(We need to have feeding programs. Now, only select schools have it. Not nationwide. But this is the easiest way to reach students. When students are malnourished, they tend to have lower IQ. If you have low IQ, the quality of education is affected.)

Groups expressed their opposition when Marcos announced that he would appoint Duterte as DepEd chief. They said that the Vice President’s “vision does not address the current crisis besetting the sector.”

But months later, Marcos remained firm with his decision to appoint Duterte.

“She feels very strongly about it and she, as a government worker, as an administrator, she’s really very competent. I’ve seen her work – she worked very hard and she’s very methodical in the way she does things. She doesn’t leave things out and she’s very patient but she’s also quite forceful and the Department of Education is not an easy job to put together, especially since we decided that the face-to-face will go on in this upcoming semester,” Marcos said during his recent interview with Toni Gonzaga, a staunch Marcos supporter.

“That’s not an easy job because we are transforming the entire educational system from what it was during the pandemic, back [to what it was before the pandemic] and I think ‘Inday can do that,” he added.

Filipinos know how her father’s war on drugs turned out. The controversial policy claimed 30,000 lives, according to human rights groups. While education problems are totally different from drug problems, the younger Duterte cannot afford to mess it up further. Will the Vice President deliver? – Rappler.com