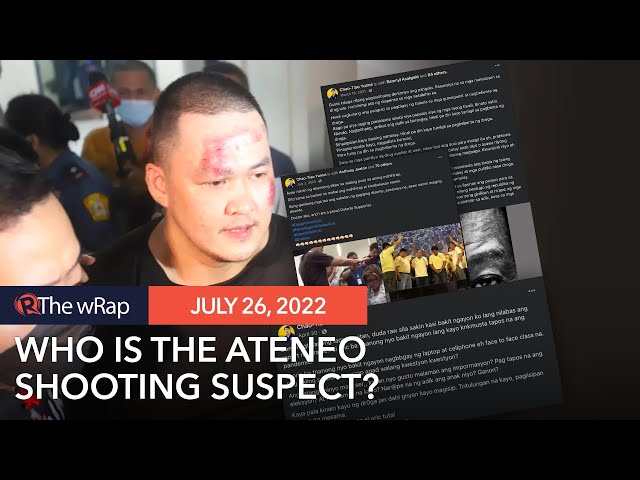 MANILA, Philippines – The lone suspect in the killing of three people inside the Ateneo de Manila University in Quezon City on Sunday, July 24, is a 38-year-old doctor from Lamitan City in the province of Basilan who supports vigilante justice, spreads hate against Rodrigo Duterte’s critics, and rages against the Furigay clan of Lamitan.

Former Lamitan mayor Rosita “Rose” Furigay was among those shot dead in Ateneo. She was there to attend the graduation of her daughter Hannah from the Ateneo Law School.

Hannah was wounded in the attack but survived, while Victor George Capistrano, Furigay’s executive assistant, and Ateneo security guard Jeneven Bandiala were killed.

TIMELINE: What happened during the Ateneo shooting incident 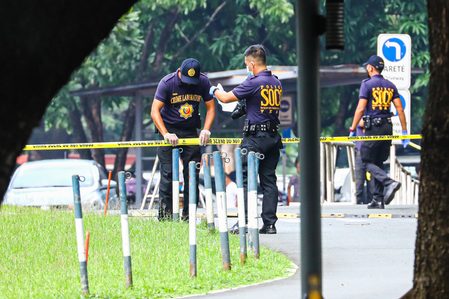 The suspect, Chao Tiao Yumol, was chased and eventually cornered by authorities after the broad daylight murders. A popular personality on Facebook where he has at least 73,881 followers as of Monday, July 25, he is closely connected to other pro-Duterte bloggers, particularly Maharlika or Binibining Maharlika, who has a history of peddling fake reports. Yumol’s Facebook account, which had a blue checkmark until Monday, eventually became inaccessible as of Wednesday, July 27.

He has mentioned Maharlika in his posts at least 31 times, often praising her and calling her his “idol.” Maharlika has been flagged several times by fact-checkers, including Rappler and Philstar.com.

After Yumol’s arrest, Maharlika shared posts defending Yumol, in effect saying that he was merely pushed to kill because of the supposed injustices that he suffered at the hands of the Furigays. This narrative is now being picked up by other pro-administration pages and accounts on Facebook.

To see the types of narratives Yumol himself actively shared on social media, Rappler analyzed posts from Yumol’s verified Facebook account. Data from social media monitoring tool CrowdTangle showed over 2,000 posts from November 2017 to July 2022. These posts were analyzed through natural language processing (NLP), a technique that clusters posts together based on their semantic similarities.

The NLP analysis showed that Yumol has shown staunch support for former president Rodrigo Duterte and has attacked opposition figures. He also has had a years-long conflict with the Furigays.

At the height of the campaign for the May 2022 presidential polls, for example, Yumol blasted Vice President Leni Robredo, at one point posting a pink rope on his Facebook wall and asking for Robredo’s address. In that campaign, Robredo ran but lost to President Ferdinand Marcos Jr. She is also a close ally of the slain Furigay.

The data showed that Yumol also conducted relief operations and medical missions. He regularly shared updates about COVID-19, hospitals, and stories about some of his patients, too. He is a physician registered with the Professional Regulation Commission under the name “Chao-Tiao Yumol II.”

Here are the key topics Yumol talked about in his Facebook posts.

The analysis showed that 13% (278) of Yumol’s posts were expressing support for, or were in defense of, Duterte. This is the biggest cluster identified by the NLP.

The posts in this cluster range from praising Duterte and his projects, as well as defending him from criticisms of his policies like the bloody war on drugs and COVID-19 response.

As with the common narrative of other prominent pro-Duterte bloggers, Yumol lauded Duterte’s vigilante justice and branded those who oppose the violent war on drugs as “dilawan,” or yellows, the political color associated with the former ruling Liberal Party.

Though Yumol is a die-hard Duterte supporter, he has also said that he is not against criticizing officials appointed by the former president. In January 2021, Yumol filed a complaint with the Ombudsman against Greco Belgica, former chairman of the Presidential Anti-Corruption Commission (PACC), for supposed grave misconduct, gross neglect of duty, and conduct prejudicial to the best interest of the service.

In his posts, Yumol said that he had approached Belgica and submitted documents accusing the Furigays of involvement in the illegal drug trade, but Belgica never acted on them. On Facebook, 2.3% (48) of Yumol’s posts were about Belgica, in which he accused the former PACC chairman of corruption and “protecting drug lords.”

In an interview with ABS-CBN on Sunday, Furigay’s legal counsel Quirino Esguerra said that Yumol’s grudge against the Furigay family started in 2018 over the closure of an infirmary clinic operated by the doctor.

In general, Yumol’s posts surged starting in 2019. His posts about the Furigay couple range from accusations of corruption to involvement in illegal drugs.

Yumol also frequently posted about his accusations without particularly naming politicians. The NLP showed that 7.6% (159) of his posts tackled crime and illegal drugs in Basilan, 4.9% (102) were claims about drug use and stealing, 2% (41) were about supposed drug lords in Lamitan City, and 1.1% (23) were about corruption in Lamitan.

Previous run-in with the law

Yumol’s accusations gained him over 70 cyber libel cases filed by the Furigays. He subsequently surrendered to the police in 2019 and was able to post bail.

Days after his arrest for the cyber libel cases, he posted on his verified account: “I am not ashamed that this happened to me. I am proud that I have gone through this. This is my battle scar. When this fight is over, this magshot (sic) will hang on my clinic wall as a testament of this struggle to liberate Lamitan and its people against 2 decades of corrupt politicians who drained public funds dry that even the most basic of services are denied from the poorest of the poor.”

Yumol has also attacked and criticized the opposition, particularly the Liberal Party that uses yellow as its signature campaign color. Yumol frequently used the “dilawan” narrative in his posts, which falsely blame the Liberal Party for supposedly plunging the Philippines into poverty.

Some of the key figures Yumol has attacked in his posts are former Vice President Leni Robredo and former senator Kiko Pangilinan – whom he insulted as “Kiko Matsing.”

The NLP found that 3.7% (78) of his posts were against Robredo and/or supporting President Bongbong Marcos. In November 2021, Yumol posted a pink rope with a caption that asked for the exact address of Robredo. One of the comments on his post said, “#LetLeniBleed!”

Yumol has also attacked the Aquinos in his posts. On June 22, he reposted a graphic from ABS-CBN about Marcos’ unpaid estate tax. Yumol said in the caption: “If I were BBM I wouldn’t pay tax then I will chase after the properties of the Aquinos and Jessie Robredo. So that it would irritate them more.”

In line with this, Yumol has also tagged the Furigays for being political butterflies who have been “dilawan” for years but switched to Duterte’s party, PDP-Laban, after Duterte’s victory in 2016.

Yumol also appeared in a separate Rappler scan that looked into attacks against journalists in the Philippines. He specifically targeted ABS-CBN after the network supposedly took down the video of his interview airing his side against the Furigays. Yumol then went on to post about how the network deserved the shutdown order because it was “biased.”

He has also repeatedly called the mainstream media “bayaran” (paid) and “fake news,” a common narrative used against critical journalists in the Philippines. The cluster of his posts attacking mainstream media accounted for 2.8% (58) of the total.

In a post in June 2020, Yumol lumped Rappler together with ABS-CBN and called them “dilawang media.” He also shared posts from other pro-Marcos influencers, including Darryl Yap and Tio Moreno, that attacked Rappler and its CEO Maria Ressa.