MANILA, Philippines – Vlogger Sangkay Janjan, or John Anthony Jaboya in real life, has come a long way since he created his YouTube channel in December 2017. His earlier videos showed different sides of his personality: a devout Christian, a passionate singer-songwriter, and an average Joe that ordinary folks could relate to.

Jaboya started churning out more videos around 2019, with each of his vlogs lasting a little bit over 10 minutes. He would begin by calling his viewers “mga sangkay” or “friends” in the Waray language, and he would close his videos by reminding them that Jesus loved them.

Today, Jaboya boasts of an audience of over 980,000 YouTube subscribers, and his videos combined have amassed over 141 million views, as of writing. He is also the vice president for internal affairs of a nascent group known as the United Vloggers and Influencers of the Philippines (UVIP), formed to lobby for vlogger access to Malacañang. Among UVIP’s members, Jaboya has the highest number of YouTube subscribers.

Throughout the years, his massive supporter base has praised him for creating supposedly informative videos and standing up to critics and doubters. Jaboya has mastered the art of connecting with his viewers, and he talks to his audience as if he was just chatting to a friend about current events, viral social media topics, and relevant gossip or tsismis – even if he was amplifying lies and hateful messages.

While YouTube channels or accounts can be terminated if they repeatedly violate the platform’s community guidelines, Jaboya’s channel is standing strong. YouTube also does not explicitly prohibit spreading false claims, and only removes content that targets an “identifiable individual…across several uploads” in rare cases. Jaboya has especially praised YouTube for its supposed “neutral” stance, adding that the platform is not controlled by “mga dilawan” or supporters of the Liberal Party.

Rappler reviewed Jaboya’s videos posted from December 2, 2017, until June 14, 2022, and categorized them according to the popular topics that his videos covered throughout his YouTube career. Data showed that while his YouTube videos discussed a variety of topics, significant topic clusters promoted lies and conspiracy theories while others targeted and demonized different groups and individuals.

Here are some of the prominent themes in Jaboya’s vlogs.

Jaboya is notorious for spreading conspiracy theories with no evidence, especially harmful claims about COVID-19 at the height of the pandemic.

In a video from April 2020, he blamed the United Nations and the World Health Organization for the pandemic as the organizations supposedly did not send China medical support at the onset of the outbreak.

He then pointed to the agenda of the “New World Order,” a conspiracy theory which posits that a global elite is seeking world control. He also claimed that billionaire Bill Gates was seeking to develop a COVID-19 vaccine, but that it could contain the “mark of the beast.”

In the same month, Jaboya also posted a video on the Philippine-made Fabunan antiviral injection, promoting it as an antidote to COVID-19, even if it had not been approved by the Food and Drug Administration.

In May 2020, he also claimed the global elite was using 5G networks to intensify the spread of the virus in a bid to reduce the global population. This video, however, did not mention COVID-19 in the title or description, which means it was not properly labeled by YouTube. This video also violated the platform’s guidelines on COVID-19 misinformation, which explicitly prohibits claims linking the virus to 5G technology.

Other conspiracy theories in his videos ranged from false claims about Philippine history, such as the lie that the late senator Benigno “Ninoy” Aquino Jr. sold Sabah to Malaysia, to bizarre takes on international events, such as the claim that the Illuminati was responsible for the sudden death of basketball legend Kobe Bryant.

Rappler also found that the Marcoses emerged as the most popular topic among Jaboya’s vlogs. At least 292 of his videos in the last five years focused on different members of the Marcos family and their alleged achievements.

Jaboya has been posting about the Marcoses and their supposed legacy ever since he started his channel in December 2017. On December 4 of the same year, just three days after he created his YouTube channel, he uploaded a compilation of what he called “brilliant and inspirational” quotes from the late dictator Ferdinand E. Marcos.

His most-viewed video, posted on the 35th People Power anniversary in 2021, focused on a brief clip of Marcos during the EDSA revolution that was allegedly not shown by the media. In the video, Jaboya claimed that Marcos loved the Filipino people and did not want bloodshed during EDSA, that’s why he ordered the military to “disperse the crowd without shooting them.”

This was later fact-checked by News5 due to lack of context. However, the video is still available on YouTube, and has over 2.2 million views, as of writing.

Jaboya’s number of videos about now president-elect Ferdinand “Bongbong” Marcos Jr. saw a drastic spike in 2021. He would post at least five videos every month that exaggerated Marcos Jr.’s achievements. This started in August 2021, the same month when Marcos said he would run for president if he had “solid support.” This was also the same month when Senator Imee Marcos said a possible tandem between her brother and Davao City Mayor Sara Duterte would be a “marriage made in heaven.”

Rappler has fact-checked claims in Jaboya’s content multiple times – he spread myths about the Marcos family’s gold and the peso-dollar exchange rate during the late dictator’s regime. He also amplified the claim that no one was abused and tortured during Martial Law.

He also claimed, wrongly, that no president after Marcos built mass transit projects, and that South Korea and Singapore had copied Marcos’ economic blueprint.

Some of the false claims in Jaboya’s vlogs demonized the administration of Marcos’ successor Corazon Aquino. These included claims that Aquino “wasted” the Bataan Nuclear Power Plant project and that the EDSA People Power uprising led to the privatization of state-owned firms.

Critics questioned the accuracy of his claims about the Marcos family and regime, but he gamely addressed them. In a September 2020 video, he claimed history books were “biased” as they only focused on Martial Law without including Marcos’ achievements, such as his infrastructure projects. In a July 2021 video, he said that he relied on testimonies from older Filipinos who lived through Martial Law and claimed the Marcos era was peaceful. 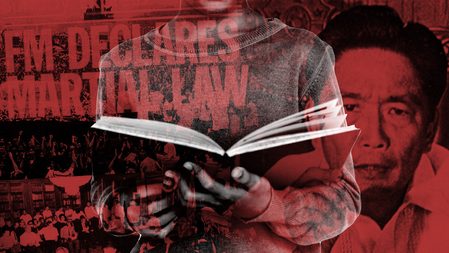 A good fraction of Jaboya’s videos have taken an offensive approach – many of his videos have attacked figures and organizations critical of the Marcoses and Dutertes, including Vice President Leni Robredo and mainstream media outlets.

When grouped by topics, videos attacking Robredo ranks second in terms of total views, just behind videos on the Marcos family and their alleged legacy. At least 135 of Jaboya’s videos have targeted Robredo, and these vlogs have amassed over 19.5 million combined views.

Jaboya also only started targeting Robredo in 2020, and there was a significant spike in videos attacking the Vice President two years later in 2022, in the lead-up to the elections. Robredo was Marcos’ closest rival in the presidential election, and at the time she was steadily gaining widespread support from her mammoth pink rallies across the country.

His most popular anti-Robredo video slammed the Vice President for criticizing her 2022 rivals in an interview with entertainment host Boy Abunda. Jaboya pointed out that Robredo did not hesitate to criticize each of her rivals when asked why Filipinos shouldn’t vote for them, and he praised Marcos for refusing to do the same because he “[did] not believe…in negative campaigning.” The video has over 500,000 views, as of writing.

In another video, which has over 480,000 views as of writing, Jaboya amplified an opinion column from The Manila Times’ Rigoberto Tiglao, who claimed, without evidence, that five “US-funded” media outlets – or “limang Satanas” (five Satans), as Jaboya put it – were campaigning for Robredo in the 2022 elections.

Across different uploads, Jaboya alluded to the baseless claims that Robredo “stole” the 2016 vice presidential election from Marcos. (READ: How false narratives on election cheating spread ahead of 2022 elections)

Jaboya has also made fun of the Aquino family, members of the Liberal Party, and other figures critical of the administration, like 2022 senatorial bet Luke Espiritu and actress Angel Locsin. He even criticized pro-Duterte blogger Mocha Uson when she slammed pro-Marcos actress Toni Gonzaga for saying Marcos Jr. would be returning to his home in Malacañang when elected president.

Jaboya has also hit several mainstream media outlets for their critical reporting on the Marcoses and the human rights abuses committed during Martial Law. In different videos, he has attacked Rappler, ABS-CBN, GMA, TV5, Philstar.com, and Inquirer. He has also praised hyperpartisan networks like SMNI and NET25 that broadcast pro-government propaganda and disinformation.

In his third most-watched video, with over 1.1 million views, Jaboya claimed mainstream media was unnecessarily instilling fear through COVID-19 reports. He criticized a social media graphic from Philstar.com, which emphasized the number of total COVID-19 cases reported in the country and excluded the number of active cases.

He said that unnecessarily scaring Filipinos with COVID-19 numbers would lead to anxiety, which will eventually lead to the weakening of the immune system, allowing Filipinos to become more likely to contract the virus and get hospitalized.

When media organizations fact-checked claims in Jaboya’s videos in the past, he did not bother to issue corrections and instead posted attacks on the outlets that countered his conspiracy theories with evidence.

He has also red-tagged different individuals and organizations, and has sensationalized events and issues surrounding the New People’s Army (NPA) in several videos. Across multiple uploads, Jaboya has praised the anti-terror law, which critics fear will be weaponized against dissent.

Rappler fact-checked one of Jaboya’s posts claiming that retired Army Major General Jovito Palparan did not abduct two University of the Philippines students, and instead blamed the NPA for the abduction.

When Facebook took down a fake network linked to the Philippine military and police, he suggested that the social media platform was conspiring with communist terrorists, driving his point home by noting that Rappler was one of the platform’s third-party fact-checkers.

A November 2020 video amplified a claim that Rappler, ABS-CBN, and Inquirer were conspiring with communists to oust President Rodrigo Duterte.

He even attributed the rise in crimes to the 1987 Constitution ratified under the Corazon Aquino administration. He also falsely claimed that Benigno Aquino Jr., one of Marcos’ staunchest critics, had plotted with Communist Party of the Philippines founder Joma Sison to establish communism in the country.

A previous Rappler investigation found that propaganda networks enabled and even justified attacks on activists and critics by branding them as “terrorists” and exaggerating communist threats. Such red-tagging narratives, which were seeded through blogger-propagandists, put activists at risk of real-world harm. (HINDI TOTOO: Hindi banta sa buhay ang ‘red-tagging’)

Rappler has also reached out to YouTube for comment, but the tech company has yet to respond as of writing.

With his YouTube clout giving him nearly a million subscribers and with a political climate that empowers and legitimizes vloggers, Jaboya is showing no signs of slowing down. – with reports from Dylan Salcedo, Pauline Macaraeg, Gemma B. Mendoza, and Don Kevin Hapal/Rappler.com