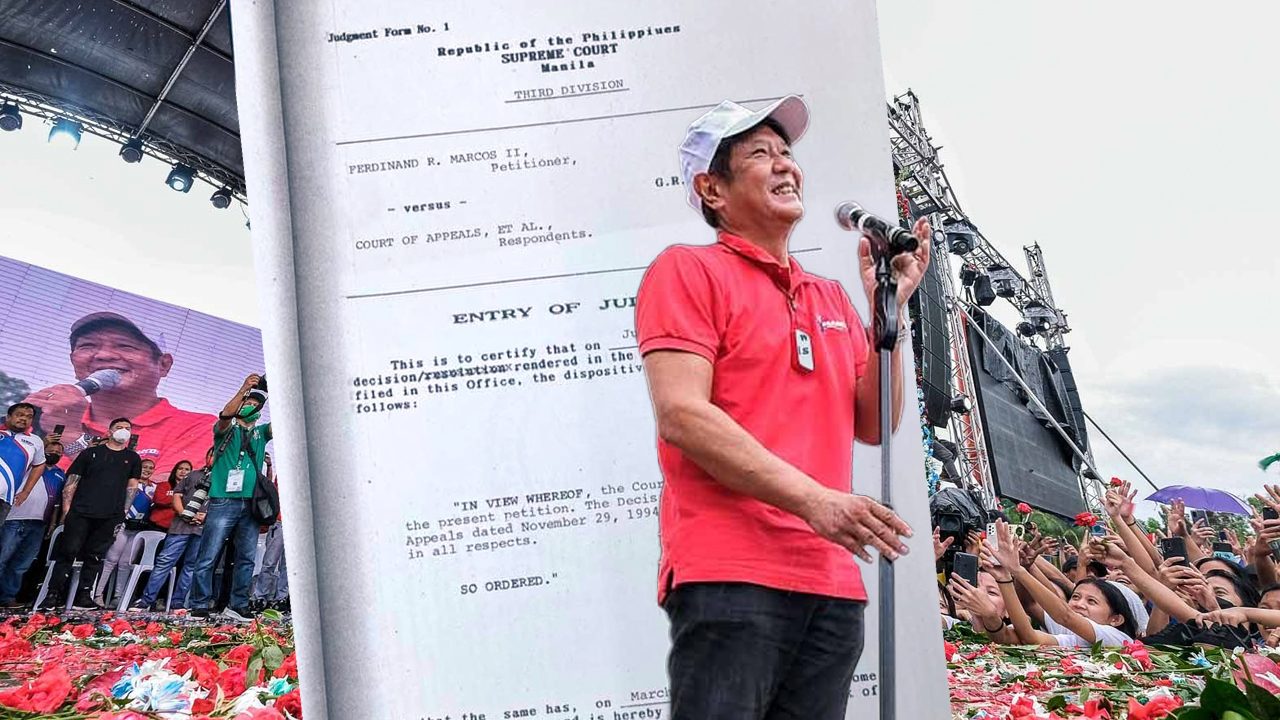 DAVAO DEL SUR, Philippines – The Supreme Court 1997 ruling that ordered the Marcos family to pay P23 billion in estate tax became final in March 1999, the entry of judgment shows, and it’s a debt that remains unpaid up to now according to no less than Finance Secretary Carlos Dominguez.

The Bureau of Internal Revenue (BIR) is under the Department of Finance.

“BIR is collecting and demanded payment from the Marcos estate administrators. They have not paid,” Dominguez told reporters Wednesday, March 30.

The entry of judgment, a document that the Supreme Court issues when a ruling has attained finality, shows that G.R 120880 became “final and executory” on March 9, 1999, according to the entry that Rappler obtained.

These are very clear proof that the issue has long been made final, contrary to the statement of Vic Rodriguez, spokesperson of Ferdinand “Bongbong” Marcos Jr., who said that “the issue is still pending in court.”

What Rodriguez wants people to believe is that the BIR should not be able to collect yet because the government through the Presidential Commission on Good Government (PCGG) is still litigating some properties in court in order to forfeit them in favor of the state.

It’s wrong logic, tax lawyer Mickey Ingles earlier told Rappler’s podcast Law of Duterte Land, explaining that whatever the PCGG wins would not cut into the amount that the Marcoses have to pay, either P23 billion as originally assessed in 1997 or P203 billion as per the estimate that the amount had already reached when you account surcharge, penalties and interest.

Ingles said even if PCGG wins some properties, it wouldn’t be considered the payment for the estate tax.

“The job of the PCGG is not to collect taxes, but the BIR’s. It’s totally different. If they sequester properties, the Supreme Court decision in 1997 which says the assessment is final and unappealable still remains, regardless if PCGG collects sequestration, kasi wala namang kinalaman ’yun sa pagbayad ng taxes (because that is unrelated to payment of taxes),” Ingles told Rappler.

Estate tax is tax imposed on the assets left by someone who has died. The estate will not transfer to the heir unless the estate tax is paid. Ingles explained that whether the assets were legally or illegally acquired, or whether they are later reconveyed to the government, the taxes of the estate as owned by the person at the time of death remains the same.

This very issue was settled way back 1997. In that ruling, the Supreme Court already said: “the court is at a loss as to how these cases are relevant to the matter at issue. The mere fact that the decedent has pending cases involving ill-gotten wealth does not affect the enforcement of tax assessments over the properties indubitably included in his estate.”

But it seems that the Marcos family, particularly the estate executor – Marcos Jr. – continues claiming to this day the litigation excuse as a reason not to pay up.

As Dominguez said: “Bottomline, Marcos does not take any steps to settle and pay because pending litigation.”

The Supreme Court ruling also shows that the Marcoses did not file a protest to the assessment. The High Court said: “Where there was an opportunity to raise objections to government action, and such opportunity was disregarded, for no justifiable reason, the party claiming oppression then becomes the oppressor of the orderly functions of government.”

It remains a puzzle why the BIR was not able to collect in the last 25 years. Former BIR chief Kim Henares earlier said in a forum it wasn’t in her mind back then to file a criminal case against the Marcoses because the bureau would then be just bogged down with court paperwork, having to answer every single pleading that the family of the late dictator would file.

President Rodrigo Duterte, in his Talk to the People aired Wednesday, prodded the BIR why it could not collect the estate tax, but did not name whose estate tax he was referring to.

Reporters made attempts to get Marcos Jr.’s side but the presidential candidate walked past the media, with his guards shoving people who try to get near him, after the Uniteam rally in Digos City, Davao del Sur, Wednesday night.

First attempt at trying to interview Marcos about President Duterte’s prodding of BIR why it has not collected the estate tax. We got no answer. pic.twitter.com/q8O7SfoYSs