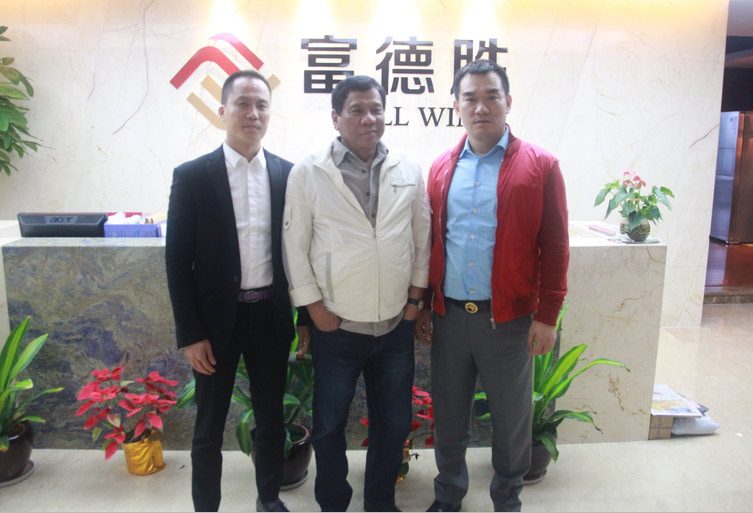 Around the time he declared his intention to run for president, would-be candidate Rodrigo Duterte paid a visit to his future economic adviser Michael Yang in China.

Photos on Chinese social network Baike and another website Huadu Press showed Duterte, then Davao City mayor, being toured by Yang in the latter’s company headquarters in Xiamen. 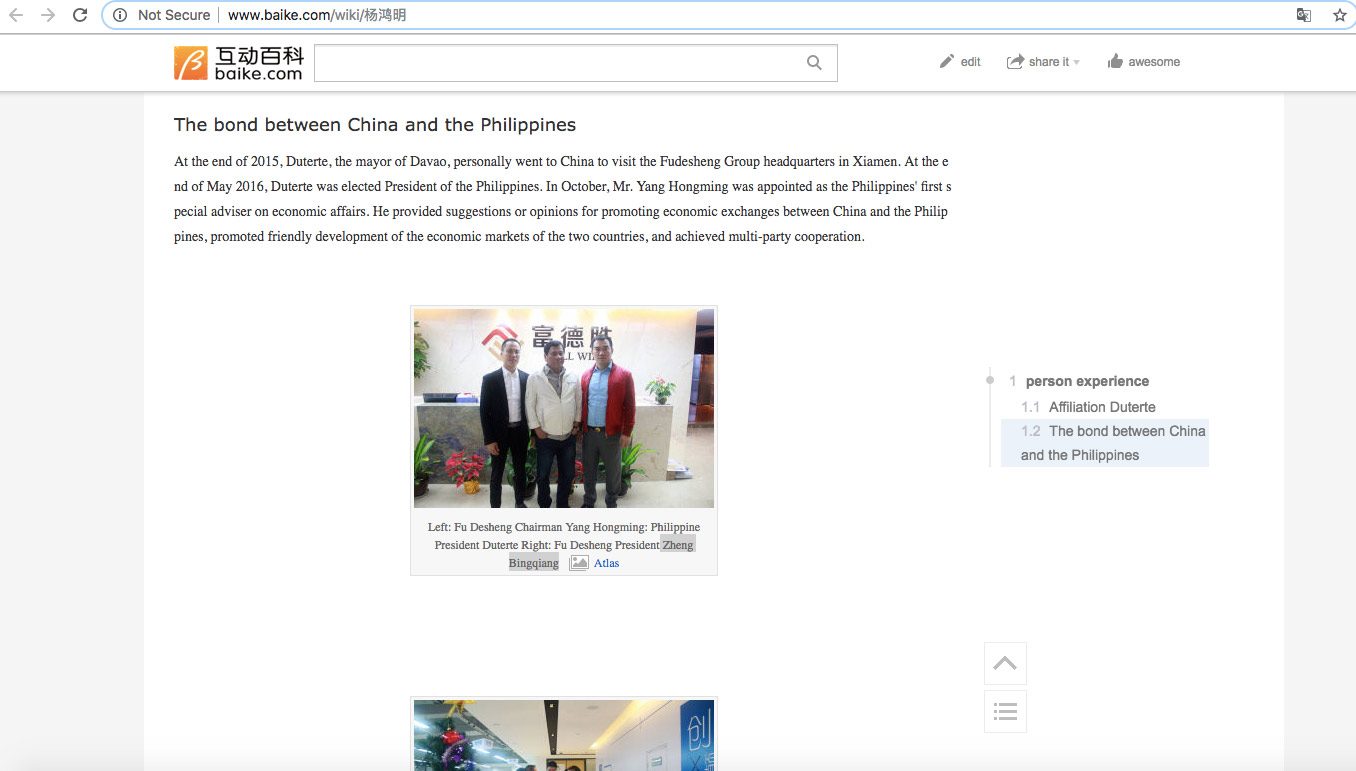 The sites identify Yang’s companies as Xiamen Fu De Sheng and Philippine Fu De Sheng Group. Fu De Sheng in English is “Full Win.” This matches Yang’s calling cards which identify him as the chairman of the Full Win company.

Duterte and Yang posed for a photo in the company building’s lobby, along with company president Zheng Bingqiang. The timing of the visit is interesting. The sites claim the visit took place in December 2015. But another source privy to Duterte’s visit said it likely happened in November.

This was around the time Duterte would have finalized his decision to run for president.

Duterte declared his presidential candidacy, on November 21 that year. A week later, on November 27, his representative submitted his certificate of candicacy for president.

The websites also say Yang “jointly donated” P700 million to fund drug rehabilitation centers in the Philippines. The donation was made under the name of the “Philippine Friendship Fund.” Yang is said to be the vice chairman of this fund.

During Duterte’s state visit to Beijing in October 2016, Yang joined Duterte’s lunch with the “Friends of the Philippines Foundation,” a group of Chinese nationals who wanted to donate a drug rehabilitation facility to the Philippine government.

The group is led by real estate magnate Jose Kho, whose Chinese name is Xu Ming Liang, as attested by the caption in a Malacañang-uploaded video.

The group, represented by Kho, would eventually donate the P500-million Bukidnon drug rehabilitation center which Duterte and Kho inaugurated in August 2017.

Yang and Kho were granted a private meeting with Duterte in Malacañang in January 2017. Ramon Tulfo, who would eventually be named special envoy for public diplomacy to China by Duterte, was part of the meeting.

Duterte was so impressed by Kho that he awarded him the Kamagi Medal of the Order of Lapu-Lapu, a recognition the President created to honor individuals who have helped him with his advocacies. (READ: Chinese businessmen flock to Duterte’s Malacañang)

Duterte’s trip to China with Yang shows just how strong their ties were even before his presidency.

In two recent speeches in which the President vouched for Yang’s innocence, he also explained how he had met the Chinese businessman.

According to Duterte, he was first introduced to Yang in 1999 by Randy Usman, a Maranao tribe deputy mayor.

(Michael Yang went here in 1999 to ask for permission. He was with Randy Usman, from Lanao, he was introduced to me. He wanted to come in here to sell cellphones, on consignment, even for just P10 a day. He put up a DCLA mall, which was cheap, to create jobs.)

From those early days, Yang’s businesses apparently grew, allowing him to amass great wealth and develop ties with both Chinese and Philippine government officials.

Back during that late 2015 visit to Xiamen, Duterte and Yang had no idea where their friendship would take them.

Ten months after that trip, Duterte, the Philippines’ first Mindanaoan president, would name Yang his presidential adviser on economic affairs and bring him to his first state visit to China.

Things appeared to be going well, until an intelligence report landed on Duterte’s desk, alleging Yang’s links to the illegal drug trade.

This prompted Duterte to mention Yang in a speech in October 2018, throwing Yang’s life, kept private until then, into the spotlight.

On Tuesday, March 26, Malacañang said Yang was no longer economic adviser of the President as his contract ended December 31, 2018. – Rappler.com