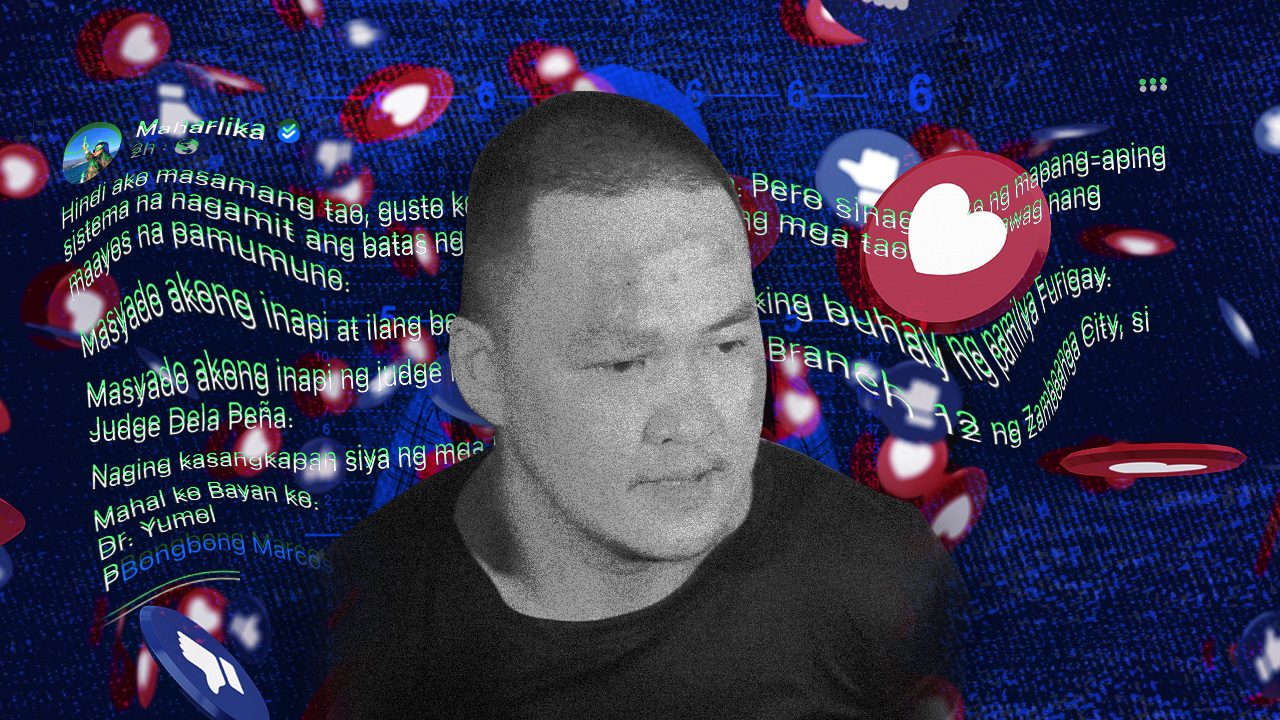 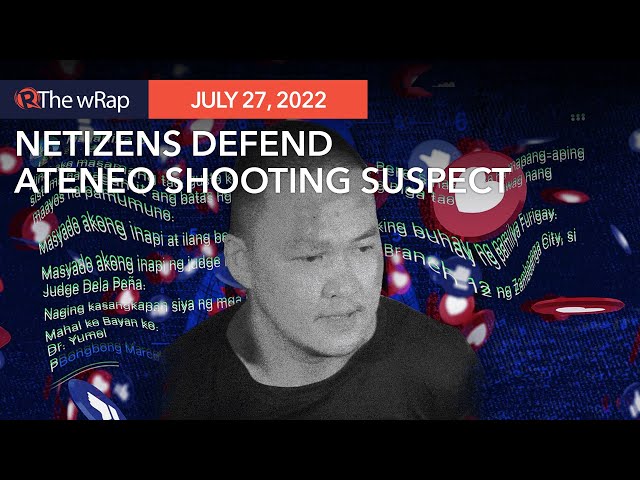 As the country’s top public officials and institutions condemned the killings, other narratives similar to Maharlika’s started to brew on social media – including claims that Yumol is a mere victim in all of this, and that his actions are justified because of the supposed political injustices he has experienced.

Rappler scanned public posts on Facebook and YouTube and found close to 250 YouTube videos and over 2,300 Facebook posts from pages, groups, and verified profiles mentioning “Yumol” from Sunday, July 24, to Tuesday, July 26. The captions and titles of the posts were later analyzed to determine whether or not they intended to downplay the crime or defend the suspect.

The analysis showed that over half of the posts mentioning Yumol on Facebook support or sympathize with him (56.6%), and almost half of the videos on YouTube mentioning him (45.4%) are supportive.

Such posts range from humanizing Yumol by citing his medical work to hailing him as a hero for supposedly exposing the corruption and rampant illegal drug trade in Lamitan. Many of these posts have garnered thousands of engagements and views on social media, effectively spinning the issue into a question of whether or not Yumol’s actions are justified – as if the fatal shooting was not enough of a crime in itself. Fatima Gaw, an assistant professor at the University of the Philippines who has also done extensive research on online disinformation networks, said that this online behavior is troubling.

“In many ways, it is part of a reactionary digital culture that makes a spectacle out of other people’s experiences, which in this case is tragic and irreversible…. What is troubling is that people are making these statements on unfounded grounds and these conversations are being capitalized by political actors to either control the damage or spin the story to their advantage,” Gaw told Rappler in an email interview on Tuesday.

On Facebook, blogger Maharlika’s posts supporting Yumol got the highest number of engagements. A separate analysis of Yumol’s Facebook posts showed that the two are close to each other – with Yumol often calling Maharlika his “idol.”

Maharlika also helped Yumol raise funds in 2021, after claiming that his life was in danger because of former Presidential Anti-Corruption Commission (PACC) chairman Greco Belgica. Yumol had earlier filed a complaint against Belgica, accusing him of not addressing his complaint about the Furigays’ alleged involvement in illegal drugs. The complaint was dismissed because the PACC has no jurisdiction over elected officials.

Since Yumol’s arrest, Maharlika has also provided updates about him on her page, often humanizing the suspect. Her posts talked about how Yumol loves his country and how he is a mere victim, too. “Biktima si Doc Chao-Tiao Yumol ng mga taong gobyernong ginagamit ang kapangyarihan para gipitin ang ordinaryong Pilipino (Doc Chao Tiao Yumol is a victim of people in government who use their power to pressure ordinary Filipinos),” Maharlika posted on July 26.

Maharlika’s posts that attempt to defend the crime have been picked up by other users – often hyperpartisan accounts and channels that imitate the form and content of legitimate news organizations. The posts that try to soften up the image of Yumol framed him as a “whistleblower,” whose goal was to liberate Lamitan from illegal drugs. The camp of the Furigays has denied Yumol’s accusations, saying they were baseless.

On YouTube, one of the most-viewed videos supporting Yumol called him a “hero” and cited Maharlika for its content. The video, posted by the channel “USAPANG BALITA TV,” has 222,255 views on YouTube as of writing.

Other sympathizers have justified the crime by insisting that Yumol himself was a victim of political injustice, citing his unproven accusations that the Furigays were drug lords in Lamitan. There were posts that attacked the victims instead, implied that they had it coming, and praised Yumol for his “patriotism.”

There were posts and videos that tagged the Furigays as “dilawan” or supporters of the Liberal Party, similar to how Yumol himself attacked the family in his Facebook posts. A common thread in these posts frame the incident as Yumol’s “revenge story” against the Furigays.

Users also focused on his criticisms of Belgica, with at least 53 Facebook posts and at least 30 YouTube videos sympathizing with Yumol mentioning the former PACC chairman and the complaint Yumol had previously filed.

Regine Cabato, a reporter of The Washington Post who has investigated online disinformation, earlier pointed out the same patterns she found on social media. “Hyperpartisan machinery does not stop producing content, capitalizing, or even mocking this grief, and overnight they have seized the narrative of this assassination on the largest social media platforms,” Cabato said in a Facebook post on Monday.

The role of social media platforms

Until Monday, Yumol enjoyed a micro-influencer status on Facebook and had a blue checkmark next to his name, indicating his verified status on the platform. The blue check disappeared on Tuesday, and his account was no longer accessible as of Wednesday, July 27. On Thursday, July 28, Meta confirmed to Rappler that Yumol’s Facebook and Instagram accounts have been taken down for violating their Dangerous Individuals and Organizations policy. (READ: Facebook takes down verified account of gunman Chao Tiao Yumol)

Before his account disappeared, Rappler was able to see that he had gained over 28,000 followers since his arrest, based on data from social media monitoring tool CrowdTangle.

Facebook also has policies in place that address posts supporting dangerous individuals or organizations. The company said it will continue to remove posts that support or represent either the shooting incident or the suspect. The tech company has taken action against shooting suspects in the past. Facebook removed the account of Kyle Rittenhouse, the 17-year-old gunman who fatally shot two men in Kenosha, Wisconsin in August 2020. The platform also blocked searches for his name and removed posts praising him, but these policies were reversed after Rittenhouse was acquitted in November 2021.

Meanwhile, YouTube’s policies prohibit videos supporting violent organizations and glorifying violent events. In an email sent to Rappler on Thursday, July 28, YouTube confirmed that Yumol’s channel was taken down for violating their violent criminal organizations policy. This is similar to when the platform previously took offline a channel that belonged to the gunman responsible for the Plymouth shooting in the United Kingdom in August 2021.

Though both Facebook and YouTube have taken action on Yumol’s personal accounts, posts that support or defend him still abound on both platforms.

For Gaw, the mutually beneficial nature of the relationship between social media platforms and content creators with a large following like Yumol and Maharlika makes regulation harder since the platforms are able to monetize the audience’s attention being brought by the big accounts.

“I would argue that the individual right to free expression should be protected but there should be higher standards for influential users who have the capacity to shape discourse and potentially inspire others to do socially problematic, if not criminal, acts…. But because influencers share a mutually beneficial relationship with platforms, they may not act on it until grave social harm has been done,” Gaw said. – with reports from Don Kevin Hapal, Dylan Salcedo, Mary June A. Ricaña, Mark Lester Caletina, and Migs Giron/Rappler.com