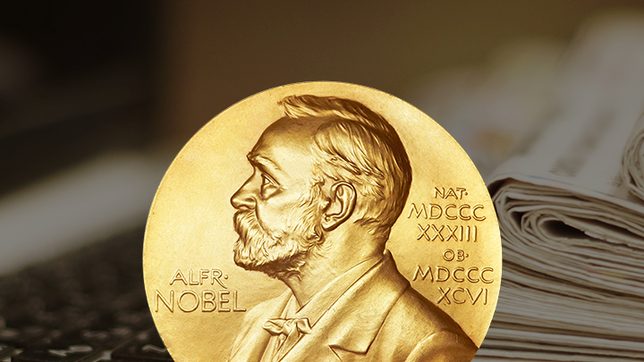 The two journalists were awarded “for their efforts to safeguard freedom of expression, which is a precondition for democracy and lasting peace.”

Journalists and media organizations were recognized through nominations for the Nobel Peace Prize in 2021. Norwegian labor leader and parliamentary representative Jonas Gahr Støre said he had nominated Reporters Without Borders, the Committee to Protect Journalists, and Rappler CEO Maria Ressa for the award.

Meanwhile, the International Fact-Checking Network at the Poynter Institute was also nominated for the prize by Trine Skei Grande, former leader of Norway’s Liberal Party.

Multiple journalists have received the award in the Nobel’s 120-year history, signifying their contribution to the peace movement.

Two awardees of the Nobel Peace Prize did journalistic work, but were awarded for their work outside of journalism.

Let’s take a look at the work of journalists awarded the Nobel Peace Prize.

Filipino journalist Maria Ressa was recognized by the committee for using “freedom of expression to expose abuse of power, use of violence, and growing authoritarianism” in the Philippines and for being a “fearless defender of freedom of expression.”

In 2012, she co-founded Rappler, a digital news site known for its fight for press freedom under the authoritarian regime of President Rodrigo Duterte. Under Duterte’s administration, Ressa has battled multiple cases and arrests and had been forced to post bail ten times.

Ressa and former Rappler researcher Reynaldo Santos Jr. were convicted of cyber libel in June 2020. The decision was widely slammed by local and international rights groups as an assault against press freedom. Seven active cases against Rappler are still pending in court as of August 10, 2021. The 2020 Sundance Film Festival documentary A Thousand Cuts tackles Rappler’s trials under Duterte and its battle for truth and democracy.

Among numerous awards in her career, she was named Time Magazine’s 2018 Person of the Year for her courage and work on disinformation.

She also authored Seeds of Terror: An Eyewitness Account of al-Qaeda’s Newest Center of Operations in Southeast Asia and From Bin Laden to Facebook: 10 Days of Abduction, 10 Years of Terrorism.

Dmitry Muratov co-founded the Russian independent newspaper Novaja Gazeta in 1993 and has been its editor-in-chief for 24 years.

The Norwegian Nobel Committee recognized Novaja Gazeta as “the most independent newspaper in Russia today,” given its critical articles on issues such as corruption, police violence, electoral fraud, and “troll factories” used by Russian military forces in and out of the country.

The committee commended Muratov for refusing to abandon the newspaper’s independent policy despite the barrage of harassment and violence by their opponents. Six of the newspaper’s journalists have been killed since its founding.

Muratov was also honored by the Committee to Protect Journalists in its International Press Freedom Awards in 2007.

In his remarks for the ceremony, he honored his murdered colleagues and said, “Why continue to publish a paper that endangers people’s lives? Because our million readers share the values of democracy. Real democracy–not its imitation.”

One of the notable controversies in the history of the Nobel Prize concerned the recognition of German journalist Carl von Ossietzky. He was awarded “for his burning love for freedom of thought and expression and his valuable contribution to the cause of peace.”

He joined multiple publications in his career and in 1926, Ossietzky assumed the role of editor-in-chief of Die Weltbühne (The World Stage) after the death of its founder and editor Siegfried Jacobsohn. It later published an article in March 1927 by Berthold Jacob, “which criticized the Reichswehr for condoning paramilitary organizations.” As editor, Ossietzky was tried and convicted for libel and sentenced to one month in prison.

This did not deter Ossietzky. In March 1929, he published an article by Walter Kreiser that essentially opposed secret German rearmament which violated the Treaty of Versailles. Ossietzky was charged with betrayal of military secrets and was convicted, sentenced to 18 months in prison, and released after 7 months after having been granted amnesty in 1932.

He was, however, arrested in February 1933, and was later kept in a concentration camp where he was mistreated. While he was considered a traitor to many Germans, there was an international campaign for Ossietzky that saw him as a “symbol of democratic resistance against Hitler.” Germans-in-exile and anti-fascists in democratic countries campaigned to secure the Nobel Peace Prize for Ossietzky. Before February 1936, 86 nominations for Ossietzky were received by the Nobel Institute in Oslo, even causing an internal stir among the members of the Nobel Committee.

Ossietzky was awarded the Nobel Peace Prize in 1935, much to Hitler’s fury. The government disallowed his release from the concentration camp and demanded that he decline the prize. Ossietzky refused.

The German press was prohibited from commenting on this awarding, and Hitler forbade Germans from accepting any Nobel Prize in the future. Ossietzky was kept under constant surveillance in a hospital until his death.

British journalist, author, and economist Norman Angell was awarded the prize “for having exposed by his pen the illusion of war and presented a convincing plea for international cooperation and peace.”

When he emigrated to America, Angell worked odd jobs and eventually became a reporter for the St. Louis Globe-Democrat and then the San Francisco Chronicle.

He later went to Paris and took on the role of sub-editor of the Daily Messenger, then staff contributor to Éclair. He was also a correspondent for American papers. Angell became editor of the Paris edition of Lord Northcliffe’s Daily Mail in 1905, then resigned in 1912 to devote himself to writing and lecturing.

His most famous work The Great Illusion brought upon a theory, which came to be known as Norman Angellism, which posits that “military and political power give a nation no commercial advantage, that it is an economic impossibility for one nation to seize or destroy the wealth of another, or for one nation to enrich itself by subjugating another.”

Angell published dozens of books that tackled an array of topics such as currency problems, patriotism, collective security, and national sovereignty in an organized society, among others. He also wrote for newspapers and journals regularly, and even edited Foreign Affairs from 1928 to 1931.

He was a member of the Commission Exécutive de la Société des Nations (Executive Committee of the League of Nations and of National Peace Council).

Austrian journalist Alfred Hermann Fried received the prize “for his effort to expose and fight what he considers to be the main cause of war, namely, the anarchy in international relations.”

Fried was born in Vienna but spent most of his career in Germany. He took part in the peace movement by founding, editing, and/or writing for publications and journals such as the Monatliche Friedenskorrespondenz (Monthly Peace Correspondence) and Die Waffen Nieder! (Lay Down Your Arms) which was replaced by Die Friedenswarte (The Peace Watch), among others. Apart from this, Fried was also an organizer.

When war erupted in 1914, Fried shifted his work to Switzerland, since pacifist activities were hindered by government censorship and a close-minded public. He continued to publish Die Friedenswarte to cater to international peace efforts. He was then accused of treason by the Austrian government, able to return to Vienna only when the war ended.

He also published Mein Kriegstagebuch (My War Journal), which was a record of his and his colleagues’ sentiments and activities during the war. He led a journalistic campaign against the Versailles Treaty and pushed his propaganda for peace that “the war was proof of the validity of the pacifistic analysis of world politics.”

Italian journalist Ernesto Teodoro Moneta – described as a “militant pacifist” – was awarded the Nobel Peace Prize “for his work in the press and in peace meetings, both public and private, for an understanding between France and Italy.”

Moneta had a military background but started a normal life later on, assuming the role of editor for the daily newspaper Il Secolo in Milan from 1867 to 1895. According to the Nobel Lectures, “he forged Il Secolo into a powerful instrument for shaping public opinion without compromising its editorial balance.”

For one, he allowed Il Secolo to take an anticlerical stance, believing that certain abuses among the clergy impeded Italian unification and social progress. He also campaigned for reforms in the Italian army in the paper’s columns.

His opus Le guerre, le insurrezioni e la pace nel secolo XIX (Wars, Insurrections and Peace in the Nineteenth Century), published in 4 volumes, focuses on the military instead of social or economic issues. He employed the recurrent theme of “the lack of substantive results achieved by wars and militarism.” He was, however, a staunch nationalist in Italy.

He continued to republish his articles and contribute to columns even after he retired as editor of Il Secolo. Apart from his journalistic work, Moneta participated in peace congresses and was also the Italian representative in the Commission of the International Peace Bureau in 1895.

Yemeni journalist, activist, and politician Tawakkol Karman was awarded the Nobel Peace Prize in 2011, sharing the award with two other laureates “for their non-violent struggle for the safety of women and for women’s rights to full participation in peace-building work.”

She co-founded the group Women Journalists Without Chains in 2005, advocating for freedom of expression and democratic rights. The organization produces reports on human rights abuses and attacks against the press in Yemen.

Karman started calling for the ouster of then Yemeni president Ali Abdullah Saleh in 2007 through articles in Yemeni newspapers. In the same year, she led weekly sit-ins in Sana’a, calling for various democratic reforms. She also took part in the Arab Spring in 2011, which involved protests against ruling governments in multiple Arab countries. Karman was arrested on multiple occasions.

In one instance, Karman’s arrest led to bigger protests against the Saleh administration, and she became the leader of this movement upon her release. This role earned her the Nobel Peace Prize at the age of 32.

While Swiss peace advocate Élie Ducommun was awarded the prize “for his untiring and [skillful] directorship of the Bern Peace Bureau,” he also did journalistic work for a big part of his life. He edited the political journal Revue de Genève and founded the radical journal Der Fortschritt (Progress).

In 1891, Ducommun became honorary general secretary of the International Peace Bureau, which linked peace organizations in different countries. Even then, he continued to prepare or edit various articles of writing for peace societies and international peace congresses.

He was also a political figure and business executive. – Rappler.com