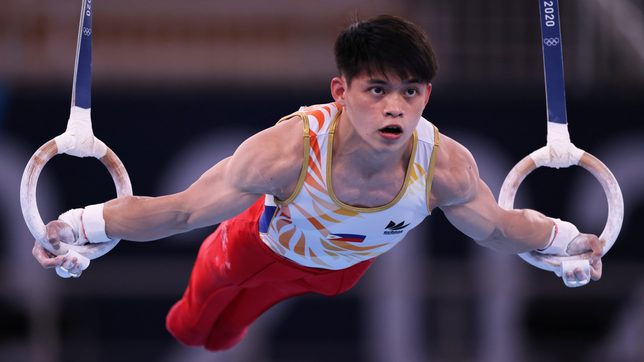 CHARGE TO EXPERIENCE. Carlos Yulo says all of the hardships he went through to reach the Tokyo Olympics were all worth it.

Filipino gymnast Carlos Yulo promised a better showing in the future after wrapping up his maiden Olympic campaign in Tokyo without a medal.

Touted as one of the Philippines’ top medal bets, Yulo fell short of a bronze as he finished at fourth place in the men’s artistic gymnastics vault finals on Monday, August 2.

(We will come back stronger.)

Despite failing to reach the finals of his pet floor exercise event, where he won a world championship two years ago, Yulo punched his ticket to the vault finals with a sixth-place finish in the qualification.

He tallied the second-highest individual score in the finals with 14.866 on his second vault, but narrowly missed a medal due to a .100 deduction on his first vault that netted him 14.566.

Yulo still had an admirable run, considering he is the youngest in the vault finals at 21 and he placed higher than the likes of vault world champion Nikita Nagornyy of the Russian Olympic Committee.

(It was not an easy road getting to the Olympics, but our hard work and tears were all worth it.)

On his Facebook post, Yulo also thanked his family, his team, and his supporters who aided him in his Tokyo campaign.