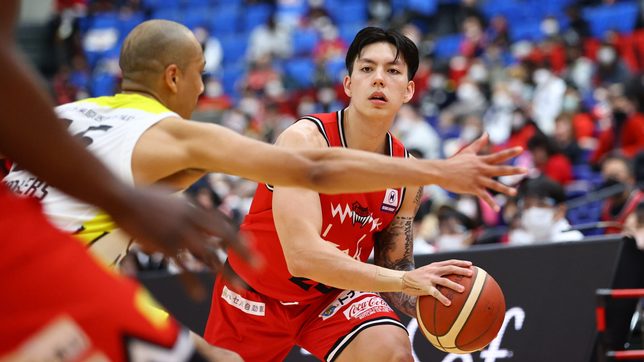 TOUGH START. Dwight Ramos and the Grouses kick off the new year with a setback.

MANILA, Philippines – The Toyama Grouses started the new year on a heartbreaking note in the Japan B. League as the Hiroshima Dragonflies earned an 84-79 home win on Saturday, January 1.

Gilas Pilipinas rising star Dwight Ramos, who was a starter in 18 of the Grouses’ last 19 games, only played a B. League career-low 3 minutes off the bench in this close affair, and finished with just 1 rebound and 2 missed free-throw attempts.

Despite Ramos’ limited involvement, Toyama still brought the fight to the Hiroshima hosts, and cut down a 10-point deficit, 59-69, early in the fourth quarter to just two, 69-71, off a 10-2 run capped by a Keijuro Matsui triple at the 5:20 mark.

However, after two free throws from former PBA import Joshua Smith kept the Grouses’ deficit at one, 79-80, with 1:39 left in regulation, the Dragonflies stepped up on defense, and challenged Toyama’s final four field goal attempts to seal the deal in their favor.

All eyes are now on Ramos and Mavunga to get back their regular playing time as the Grouses aim for a comeback in the Sunday, January 2 rematch at 1:05 pm, Manila time.

Despite only playing 3 minutes, Ramos was the only Filipino who even saw the court for the New Year’s Day game slate as Matt Aquino was fully benched in the Shinshu Brave Warriors’ 74-94 road loss to the defending champion Chiba Jets.

Over at Division 2, Juan Gomez de Liaño extended his absence to nine straight games as the Earthfriends Tokyo Z fell to the visiting Fukushima Firebonds, 77-87.

Both Aquino and Gomez de Liaño can make their on-court returns in their respective teams’ Sunday rematches, both at 2 pm. – Rappler.com