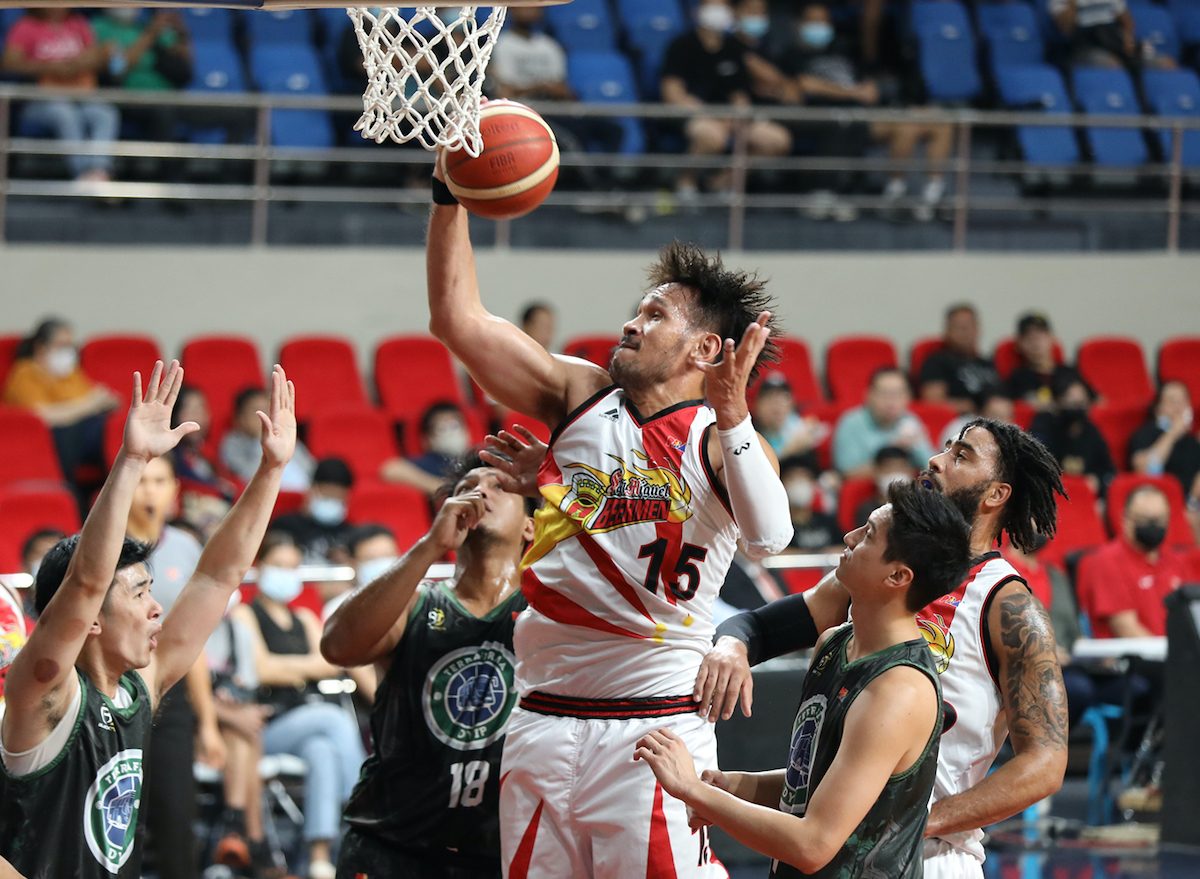 MANILA, Philippines – San Miguel welcomed back June Mar Fajardo from a month-long layoff and drubbed import-less Terrafirma, 131-103, in the PBA Commissioner’s Cup at the PhilSports Arena on Wednesday, November 23.

Out for seven straight games after undergoing a throat surgery, Fajardo churned out 20 points and 9 rebounds in his first game back as the Beermen mauled a Dyip side missing import Lester Prosper to boost their playoff bid.

Slowly regaining its dangerous form following the return of the six-time PBA MVP, San Miguel climbed to sixth place with an even 5-5 record.

Aside from Fajardo, San Miguel enjoyed an abundance of heroes, particularly Jericho Cruz, who chalked up a conference-high 25 points off the bench as he sparked their first-half breakaway.

Cruz scattered 16 points in the first two quarters, while Vic Manuel (13) and import Devon Scott (12) also scored in double figures by halftime to help the Beermen mount a commanding 63-38 advantage.

San Miguel never looked back as Terrafirma severely missed the presence of Prosper, who sat out due to health and safety protocols.

Prosper, who erupted for 50 points to steer the Dyip to their first season win last Friday, November 18, that snapped a 25-game skid, arrived at the PhilSports Arena but got sent home after testing positive for the coronavirus.

Without Prosper, the Beermen cruised in the second half and saw their lead grow to 112-89, their biggest of the game.

Scott finished with a triple-double of 21 points, 19 rebounds, 11 assists, and 3 steals, while Manuel chimed in 19 points and 5 rebounds.

CJ Perez added 12 points and 4 rebounds for San Miguel, which has full control of its playoff fate with two games left in the elimination round.

Juami Tiongson fired a game-high 28 points on top of 4 assists and 3 rebounds in the loss that dropped also-ran Terrafirma to 1-10.