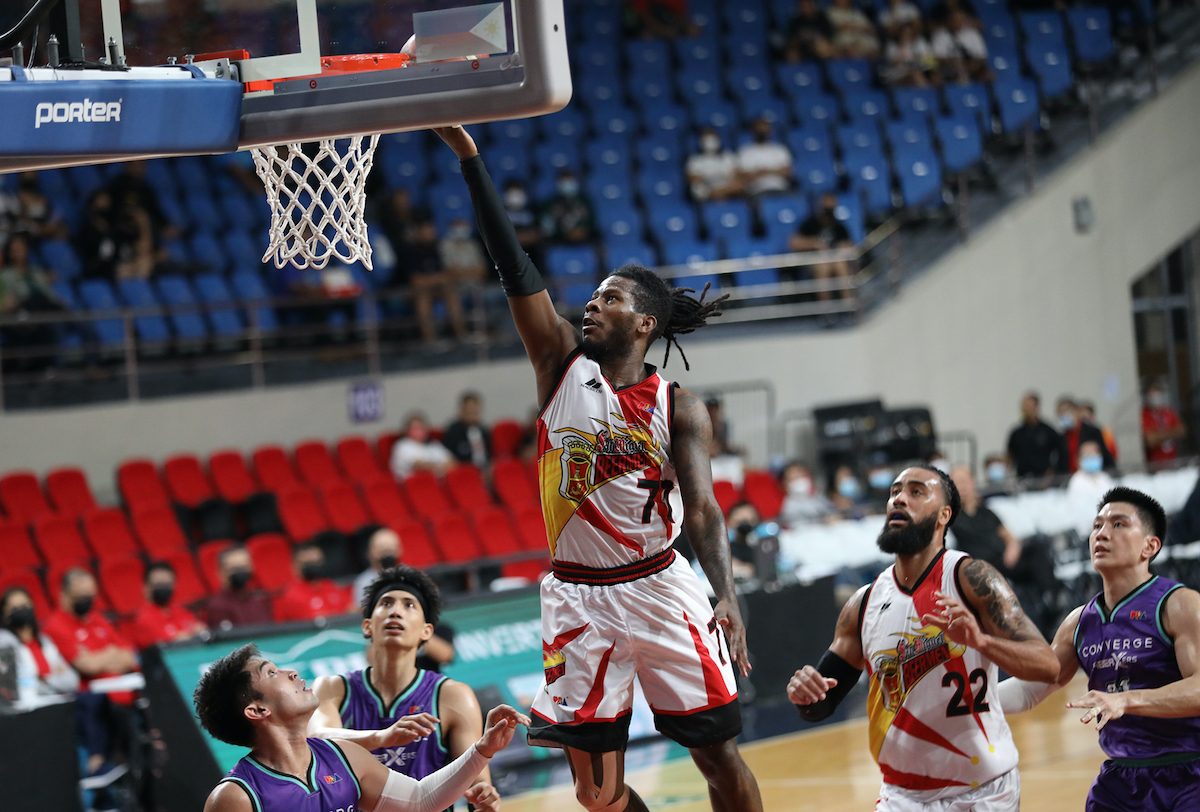 LEADING SCORER. CJ Perez shows the way for San Miguel in scoring in its romp of Converge.

MANILA, Philippines – San Miguel displayed its playoff caliber and picked Converge apart, 114-96, to move one win away from the semifinals of the PBA Commissioner’s Cup at the PhilSports Arena on Wednesday, December 7.

CJ Perez starred with 25 points, while June Mar Fajardo and Devon Scott both finished with double-doubles as the defending champion Beermen drew first blood in their best-of-three affair against the fourth seed FiberXers.

A strong second quarter proved to be the turning point for San Miguel, which entered the break with a commanding 55-32 lead and coasted the rest of the way en route to its fifth straight victory.

The win saw the Beermen avenge their 106-102 loss to Converge in the elimination round, a defeat where San Miguel played without Fajardo and Terrence Romeo due to injuries.

But with the two stars back on board, the Beermen flaunted their full strength and dealt the FiberXers – once the hottest team in the league with seven consecutive wins – their third loss in a row.

Fajardo put up 19 points, 16 rebounds, and 3 steals, while Romeo netted 13 points, 7 coming in the second quarter where San Miguel outscored Converge 34-19 to pull away after a seven-point lead at the end of the opening period.

Scott delivered all-around numbers 23 points, 12 rebounds, 5 assists, and 3 steals as he continued to be on a roll after losing to the FiberXers in his PBA debut.

Down 77-97 with eight minutes left, Converge staged a last-ditch comeback and got within 11 points off a 10-1 spurt powered by Aljun Melecio and import Quincy Miller.

Simon Enciso fell short of a double-double with 8 points, 10 assists, and 4 rebound for San Miguel after getting the boot with six minutes left for incurring two technical fouls.

Miller carried the FiberXers with 41 points, 13 rebounds, 2 blocks, and 2 steals, but Converge just could not get the job done after an ice-cold outing from beyond the arc, converting just 6 of its 41 three-pointers (14%).

In contrast, the FiberXers averaged 13 triples on a 32% clip prior to the playoffs.

Justin Arana turned in 11 points, 10 rebounds, and 3 blocks in the loss, while Melecio and Abu Tratter chalked up 11 and 10 points, respectively.

Converge is one loss away from crashing out of the quarterfinals, a possibility that seemed remote after its stellar run in the eliminations that saw it win eight of its first 10 games.

But the FiberXers ended the elimination round with a dud, losing their last two games to bow out of contention for the twice-to-beat advantage and settle for the fourth seed.