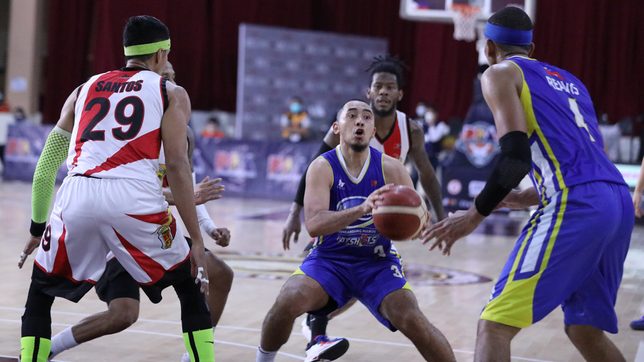 The Magnolia Hotshots remained in the hunt for a twice-to-beat playoff bonus as they took down the San Miguel Beermen, 100-90, in the PBA Philippine Cup at the DHVSU Gym in Bacolor, Pampanga on Sunday, September 19.

Paul Lee led the way for the Hotshots with 32 points, 5 assists, and 4 rebounds as they ended their elimination round campaign on a high note and improved their record to 8-3 – just behind the No. 2 Meralco Bolts’ 7-2 slate.

Already assured of the No. 3 spot in the playoffs, Magnolia will now just wait for the results of Meralco’s two remaining elimination games to determine which team advances to the quarterfinals with a twice-to-beat advantage.

“This game was in our hands and we had control of it,” said Magnolia coach Chito Victolero in Filipino.

“The game of other teams, that’s not in our control so now, we just try to wait.”

“We were able to get our job done and what we’re supposed to do, and then if it’s our destiny, if Lord gives us the top two spot, then so be it,” he added.

Coming off a rousing 1-point win over the NorthPort Batang Pier on Friday, the Hotshots came out firing from the get-go and quickly built a comfortable 14-point lead with 10:43 to play in the second period, 30-16.

Still leading by 12 points, 51-39, early in the third frame, the Hotshots saw their double-digit advantage disappear as the Beermen trimmed the deficit to just 1, 65-66, at the end of the quarter.

It was a see-saw battle between both powerhouse squads in the opening minutes of the payoff period, but it was the Hotshots who pulled away as they managed to put the lead back up to 13, 97-84, off a fade-away jumper by Lee with just 2:40 remaining in the game.

Ian Sangalang added a double-double of 15 points and 12 rebounds, while rookie Jerrick Ahanmisi contributed 11 points in the win.

CJ Perez finished with 20 points and 7 rebounds, while Arwind Santos had 18 markers and 7 boards for the Beermen, who badly missed the services of leading scorer Terrence Romeo due to a foot injury.

The Beermen, who already secured a playoff spot, remained at No. 4 in the standings with a 6-4 record.