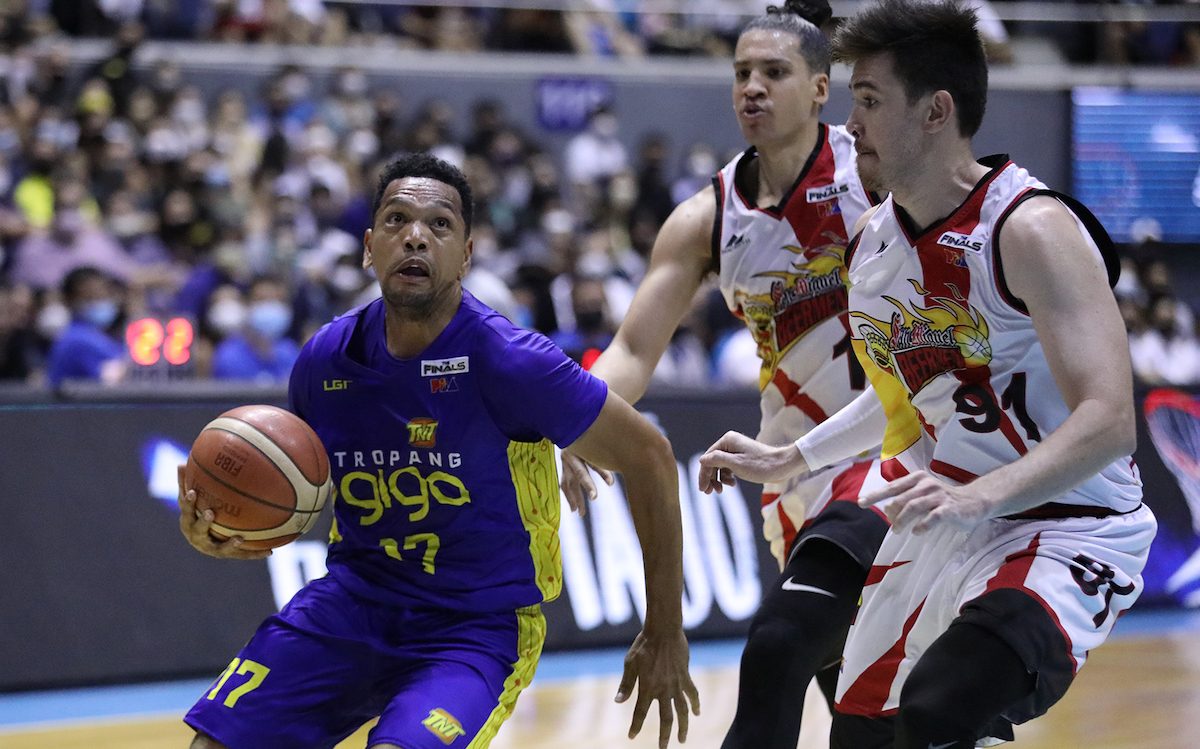 THE BLUR. Jayson Castro plays his best game in the PBA Philippine Cup finals as TNT scores the equalizer.

MANILA, Philippines – TNT cleaned up its turnovers with coach Chot Reyes back at the helm as it tied the PBA Philippine Cup finals with a 100-87 win over San Miguel in Game 4 at the Araneta Coliseum on Sunday, August 28.

Averaging 21.5 turnovers in their back-to-back losses, the Tropang Giga recorded a PBA all-time low 3 turnovers to avoid falling into a dangerous 1-3 hole and knot the best-of-seven title series at 2-2.

Jayson Castro welcomed Reyes back from his Gilas Pilipinas commitment in style and delivered a finals-high 26 points on top of 6 rebounds, 4 rebounds, and 3 steals.

Continuing his stellar play in the championship round, Roger Pogoy chimed in 21 points for the Tropang Giga, marking the fourth straight game he scored at least 20 points.

Mikey Williams helped set the tone for TNT by dropping 11 of his 15 points in the first half as they built a lead as big as 18 points and entered the halftime break with a 43-36 advantage.

The Beermen erased that deficit and even seized a 53-52 edge with six minutes left in the third frame.

But the Tropang Giga banked on Castro, Pogoy, and Kelly Williams in the final period as they restored their 18-point lead on the way to the equalizer.

K. Williams dropped 8 of his 14 points in the last salvo on top of 7 rebounds, while Poy Erram added 8 points, 8 rebounds, 3 assists, and 2 steals for TNT.

“We’re quite happy with the way that the players responded and took care of the ball,” said Tropang Giga assistant coach Sandy Arespacochaga said.

“That is not just on one person, not just on Jayson or Mikey, but everybody across the board. Everybody stepped up in that regard.”

The loss spoiled the Best Player of the Conference coronation of San Miguel star June Mar Fajardo, who saw his 20-point, 19-rebound outing go down the drain.

Although Fajardo fell just a rebound short of his second consecutive 20-20 after putting up 27 points and 27 rebounds in Game 3, he struggled offensively as he shot 53% from the field, below his conference average of 62%.

Simon Enciso and Marcio Lassiter fired 15 and 14 points, respectively, in the loss.