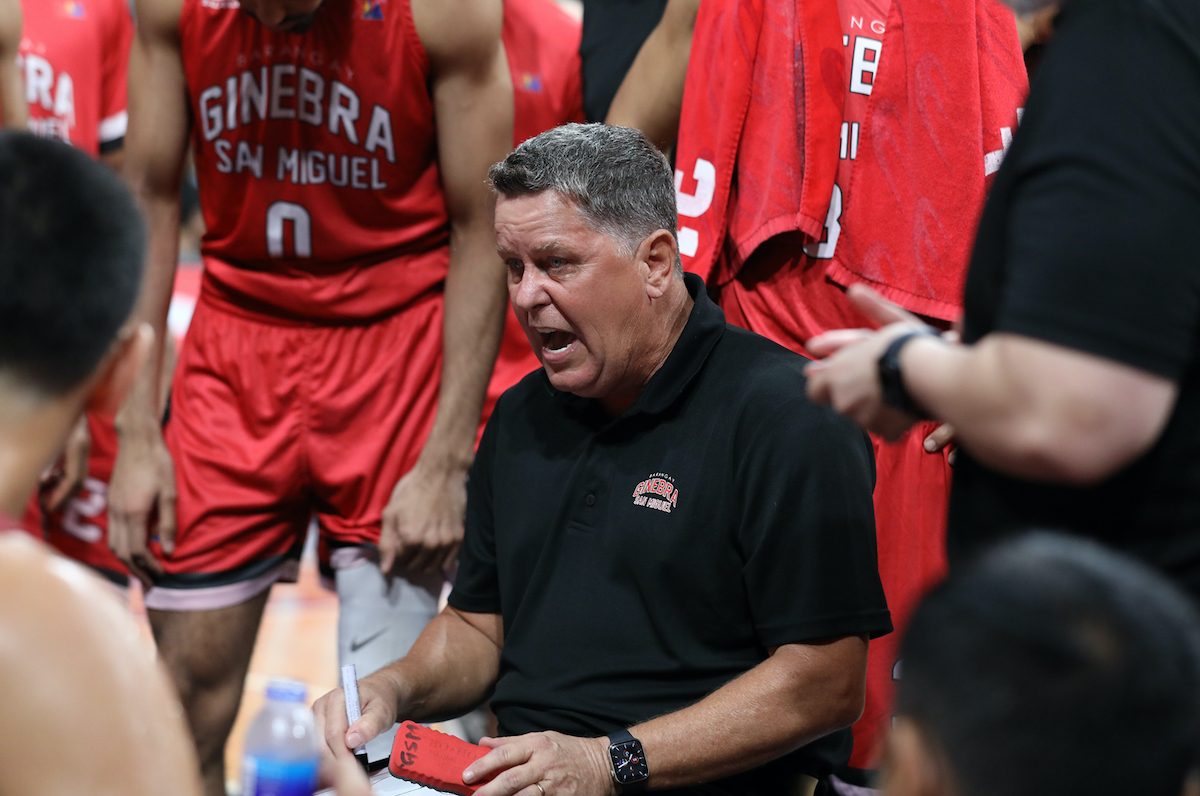 ONE MORE. Tim Cone and Barangay Ginebra are one win away from the semifinals.

Facebook Twitter Copy URL
Copied
'I just kind of feel bad for my coaching staff that we were the only ones still in dinosaur age,' says Ginebra coach Tim Cone as he and his staff start wearing polo shirts in games

Cone and the rest of his coaching staff all wore black polo shirts as Barangay Ginebra moved one win within the semifinals of the PBA Commissioner’s Cup after a 118-102 victory over NorthPort on Wednesday, December 7.

Known for regularly donning long sleeves polo and tie throughout his decades-long career, Cone said it was time for a change as leagues all over the world have loosened on their dress codes.

“[T]he reason is everybody’s doing it. The NBA’s doing it, they’ve taken the coat and tie away. I guess we just started to decide to modernize ourselves,” said Cone, who joined the Miami Heat in the NBA Summer League this year.

“I’ve been thinking about it for quite a while, ever since the NBA started going away from the thing and then… I worked with the Miami Heat and they were much more informal in terms of their coaching attire,” Cone added.

Getting with the times aside, Cone said he wants his deputies to be comfortable, knowing it can be sweltering in long sleeves while coaching highly-charged games.

“Honestly, I just kind of feel bad for my coaching staff that we were the only ones still in dinosaur age. It’s really more for them than it is for me. It’s working out. It’s comfortable, I enjoyed it. We’ll continue to do it for now.”

Now 64 years old, the winningest mentor in PBA history added he does not look as good in long sleeves as he did decades ago.

“I thought when I was in my 30s and 40s, I could get away with it. I looked pretty good. Slim, felt very corporate. Now, I just look old,” said Cone.

“So maybe this thing will make me look just a few years younger. That’s the hope anyway.”

The switch came at a perfect time as the Gin Kings drew first blood in the best-of-three quarterfinals to zero in on their fourth semifinal appearance in the mid-season tournament.

Another win will push Ginebra closer towards its goal of capturing its fourth championship over the last six conferences.

“I’m glad we won the first game because otherwise, everybody would think it’s superstitious, got to put the tie back on. Luckily, we won the first one so we can continue doing this,” Cone said.

The Gin Kings will go for the kill when they meet the Batang Pier anew on Saturday, December 10, at the PhilSports Arena. – Rappler.com