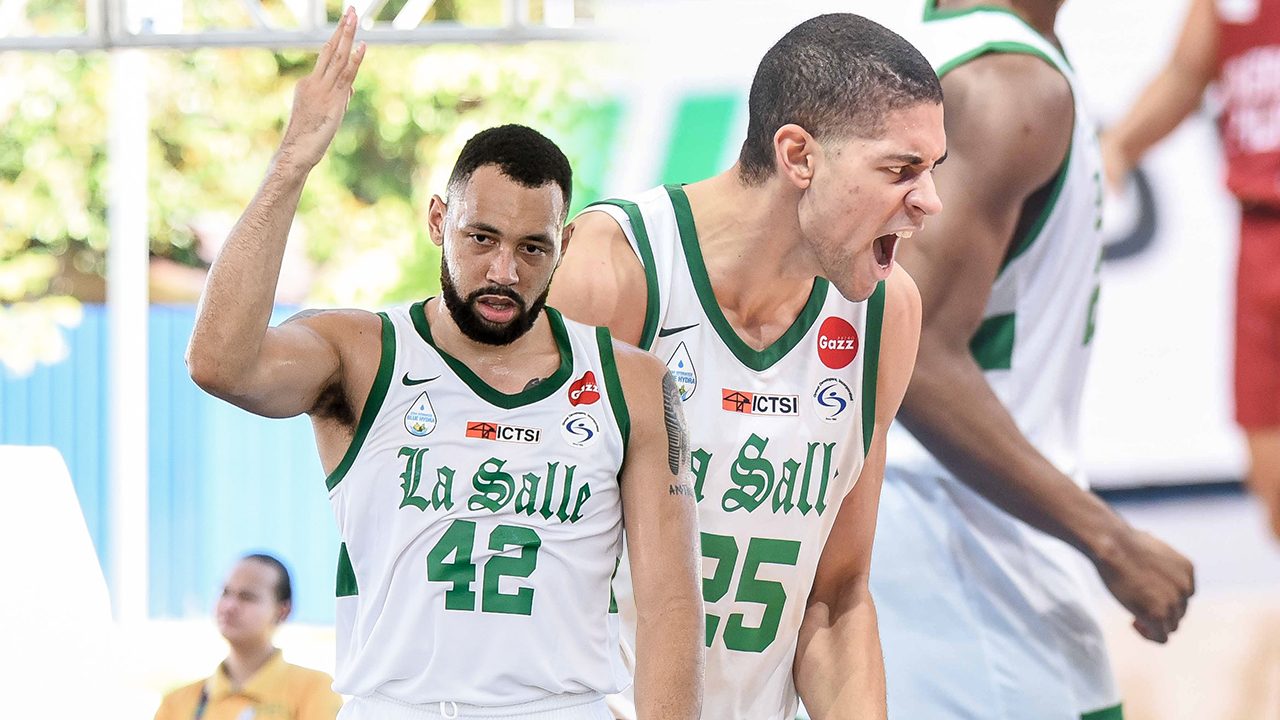 Facebook Twitter Copy URL
Copied
From writing books, to learning different languages, to strutting fast-forward fashion, the Phillips brothers of Michael and Benjamin prove they have more to show on and off the court

MANILA, Philippines – After La Salle’s gut-wrenching loss to UP in the UAAP Final Four – where DLSU led for all but 31 seconds in the series but still lost and squandered a 14-point advantage in the final quarter – brothers Benjamin and Michael Phillips portrayed sportsmanship by visiting the Fighting Maroons’ locker room.

“We stopped in after the loss and told [UP] to win it all and how proud we were to play against them and coach Gold (Monteverde),” Benjamin shared.

“Some of those players are friends of ours – (Carl) Tamayo, (Zavier) Lucero, and (James) Spencer. We wanted to give our respect.”

It was a microcosm of who Benjamin and Michael are as human beings and why in such a short time, people who get to know them have grown fond of the Philippines-loving Phillips brothers.

Michael, who was named to the UAAP Season 84 Mythical Five, has four years left of playing eligibility – a promising sign for a La Salle program which has not won a UAAP title since 2016.

He’s already a rebounding machine and one of the premier rim protectors in college basketball. Although his offense isn’t polished, he’s able to finish in the paint and capitalize on second-chance scoring opportunities.

“Free throws,” the well-mannered, 18-year-old chuckled when asked what he’s been working on since their campaign ended in early May.

Michael took 49 free throws in his rookie season but converted only 16, in line with what’s popularly known as the “La Salle (free throw) Curse.”

“We have to end the curse,” he joked.

Even during the offseason, the brothers try to be in bed by 9 pm and awake by 6 in the morning. Their days consist of scrimmages, weightlifting, rehab, studies, and the occasional downtime to pursue other passions.

They chose to stay in the Philippines rather than go back to the United States to get a head start with the rest of the Green Archers for Season 85 in October – a retribution campaign.

Benjamin says he has three years left of eligibility and aims to earn more playing time in his sophomore campaign following a rookie season where he barely saw the court due to DLSU’s volume of frontcourt talent.

He attained playing experience by representing the Green Archers in the succeeding UAAP 3×3 competition in Batangas, where his team finished second to UST. On top of on-court production – which he hopes will soon include a reliable long-range shot – Benjamin is also La Salle’s most encouraging player on the bench, game after game.

He is likely its best-dressed student-athlete, too.

“I remember one time, [Justine Baltazar] looked at me and then kept walking straight and then turned around and then saluted me. And he was holding the door and said, ‘Teka lang boss, teka lang boss’ (Boss, just hold on).”

Baltazar’s comedic relief will be missed by his teammates as much as his two-way impact on the court. Ditto for Kurt Lojera, who became DLSU’s go-to hair stylist in the bubble.

Except for coach Derrick Pumaren. His haircut was often on a different level.

The seniors’ departures are opportunities for Michael, who is now La Salle’s best big man, and Benjamin, who’s only 23.

There’s still plenty to expect out of the Phillips brothers.

For instance, the goal-oriented Benjamin already has one book published which he wrote as a college student, is currently finalizing his second novel, and plans to write a third book.

“So the first book, Lone Wolf Mentality and the Millennial Mindset, is mainly about the transition between high school and college, how to be successful in college and any internships that you’re looking for, and mainly financial strategies and tips for young adults and for students that are kind of just coming out,” he explained.

“My second one, which is currently being published now… it’s a fictional narrative about a woman starting her own marketing agency, coming from the deep south of America, and all her trials and tribulations. So, I’ll keep that title secret for now until it’s published,” Benjamin teased.

The third work strikes closer to his current home.

“It really is about my experiences here in the Philippines and kind of what I’ve seen from everything from the culture. So that’s still kind of tucked away for now, but it’s on the rise.”

The elder brother considers writing a “therapeutic” exercise where his ideas can “flow,” which is an important activity for a self-proclaimed deep thinker who can stare at nothing for 30 straight minutes, introspective in thought.

Michael is working to excel speech-wise by learning multiple languages: Tagalog, Spanish, and Japanese. Part of his process includes conversing with people who speak other dialects online.

“I kind of love falling in love with other cultures, because I really learn more about the history,” he said, later adding:

“I just really just love making connections with people, you know, talking to my professors and kind of seeing, you know, their perspective on things. Just kind of just picking everybody’s brain as much as I can.”

The duo allowed themselves down time when their parents visited for a fun few weeks which included visits to the mall, movie nights, and exploration.

It’s their close family dynamic that provides the right environment for Benjamin and Michael to excel, and that’s not even mentioning their other talented brother who may soon take his talents to the Philippines for multiple sports.

Benjamin himself will see action for La Salle’s men’s volleyball team in Season 85.

But their current goal remains laser-focused on bringing a UAAP men’s basketball title back to Taft. While the departures of Baltazar and Lojera are critical, there’s a talented crop of incoming recruits to watch out for, including Kevin Quiambao (unless there’s a sudden change), Penny Estacio, and Jared Abadam.

“I think in those last couple of games we had momentum,” Michael said, referring to DLSU’s near four-game win streak which would have catapulted them to the Finals.

“We want to kind of build on that. We want to go into next season strong enough… we’re kind of in the shadows, you know? We don’t have that spotlight on us, and so a lot of the new guys, that’s good for them.”

Sometimes, it’s best when Archers strike from the shadows. – Rappler.com