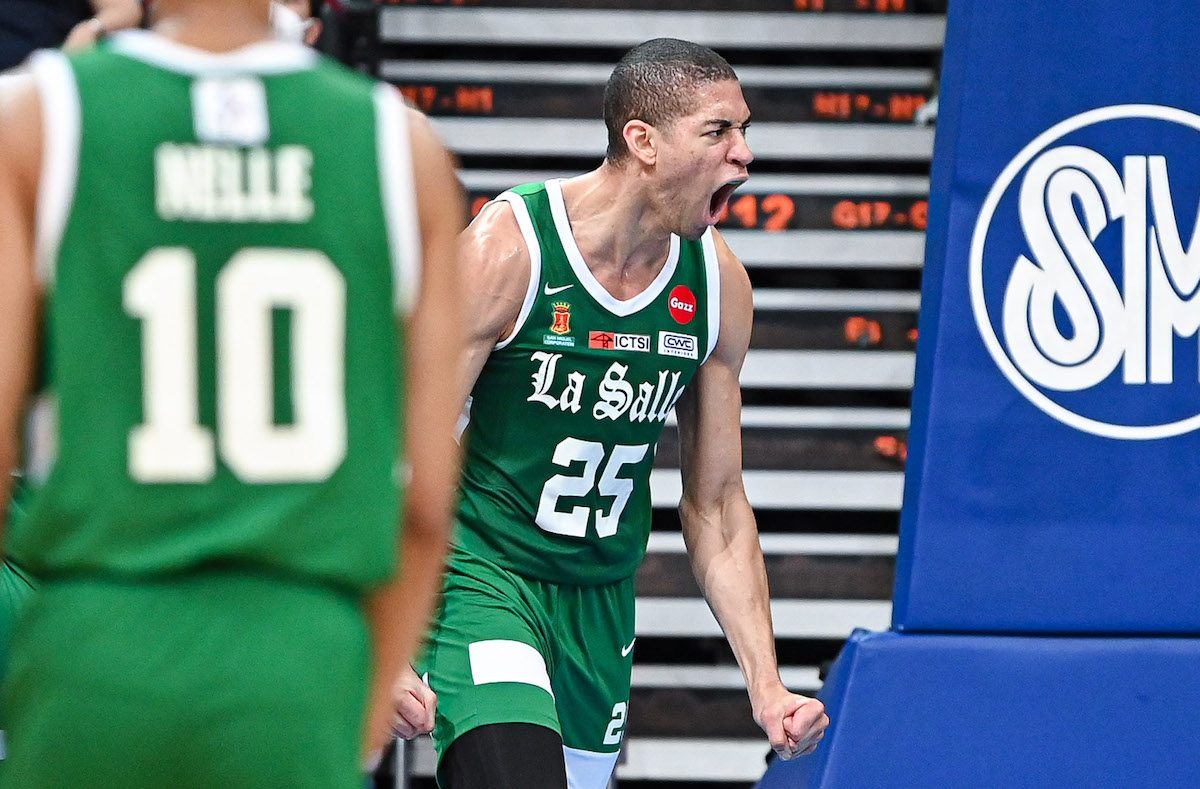 MANILA, Philippines – The La Salle Green Archers scored their most momentous victory of UAAP Season 85 by outdueling the UP Fighting Maroons in an 82-80 stunner on Sunday, November 20.

The Green Archers went 12 rounds with the defending champions and best team in the league, a wrecking ball of a contender which dominated its way to an erstwhile 10-1 standing.

La Salle did it without its best weapon, MVP favorite Deschon Winston. It accomplished triumph through energy, physicality, and passion. Call it the “Animo Spirit” if you will. Some may prefer “good execution.”

The Green Archers completed a morale-boosting comeback by defeating the Fighting Maroons at their own game: an endgame confrontation, where resolve is put to the test.

It has been a tough Season 85 for the Green Archers. Injuries, in-game maturity, rotations, coaching, and collective spirit have been named as reasons for their failure to live up to expectations.

But thanks to UP, Ateneo, and NU creating a big gap in the standings over the rest of the pack, the Green Archers’ chances of making the Final Four remain intact. Adamson has the same record (5-6) as La Salle, but it has the tougher schedule and a star player – Jerom Lastimosa still nurses a foot injury – who isn’t at full speed. UE and FEU have spiraled. The last semifinals spot is the Green Archers’ to lose, aided by their latest win.

In the third quarter of the game Harold Alarcon scored on a breakaway layup. Evan Nelle, who was chasing him, was just a second too late, and put his head down for a moment afterwards on the baseline barrier.

It looked as if the demoralized sentiment from the La Salle crowd had translated over to the players. Up to that point, for every one step forward they had taken to progress this season, they followed it up by taking two steps back.

Nelle has been adamant about “keeping the faith.” For a second, it looked like the Green Archers lost it.

But La Salle didn’t. Nelle’s head was back up and he walked to the bench, looking to re-assess. When the contest was back on, momentum shifted La Salle’s way, much to the chagrin of a UP side which had not received a prominent counter-attack late in the second half as of late.

“We’re trying to peak at the right time,” Nelle said.

The change of fortunes usually boil down to the little things.

“There’s no doubt in my mind we can beat UP, but we can beat them only if we play as a team, have that collective effort, with everyone contributing,” said Green Archers head coach Derrick Pumaren.

Nelle’s buzzer beater to end the first half and block on the taller James Spencer on the break in the third period were low-key momentum-changing plays which kept La Salle within striking distance. Each time the Green Archers threatened to fall behind, Nelle made a play – whether a timely jumper or pass – to keep the lead from climbing too far up.

Kevin Quiambao finished with 19 points, 13 coming in the final period. He finally stopped settling for jumpers and floaters and took the ball to the rim, utilizing his unique combination of quickness, size, and touch. He was a hindrance for UP on the boards, scoring on big-time putbacks. He sealed the game at the foul line, despite the pressure of a passionate Fighting Maroons crowd egging him to miss.

Quiambao also volunteered for the responsibility of guarding former high school teammate Carl Tamayo, who finished with 14 points on 15 shot attempts, telling his coach: “I’m going to take care of him this fourth quarter.”

At first, “He was out of sync,” Pumaren said of Quiambao. “In the fourth quarter, he took over the ball game. The momentum shifted when Kevin dominated. Not just offensively, but also defensively.”

Earl Abadam also made the most out of his minutes. Just like the first-round victory against Ateneo, his transition attacks and mid-range pull-ups changed the game’s complexion in the fourth quarter, sending the La Salle crowd into a frenzy.

In some ways, he looks like the rookie version of former La Salle great Jeron Teng.

“The thing with Earl is that he has to think. He cannot play on instinct alone,” Pumaren said when pressed if Abadam will receive more playing time moving forward.

“He did his part today. He was able to give us that lift.”

La Salle’s most consistent standout was Michael Phillips. He altered nearly every attempt UP took near the rim as the Maroons finished only 17/41 in the paint. He led the game with 14 rebounds, kept even more possessions alive with sheer hustle and delivered both thunderous dunks and blocks that provided his squad with bolts of energy.

La Salle got good minutes from CJ Austria and Benjamin Phillips, while Mark Nonoy had his best performance in green and white.

With their leading scorer in street clothes, the best effort was required out of everyone else. They delivered.

Pumaren’s belief came true, but the question he now faces is can he receive the same type of unified performance from his team the rest of the way? Their next game against NU on Wednesday, November 23, will be tough. The Bulldogs are 9-3 and hungry to clinch a twice-to-beat advantage. They play collectively on defense and share the wealth on offense.

Like La Salle, the Bulldogs are also peaking at the right time.

UP’s loss has opened the door for Ateneo or National U to catch them as the elimination round ends in a little over a week.

La Salle isn’t quite out of the woods themselves just yet, as the only thing that’s been predictable in UAAP Season 85 has been its undeniable unpredictability.

But for one night, that unpredictability finally worked in La Salle’s favor. Just when another downfall felt predictable, the Green Archers kept the faith, and they were rewarded well. – Rappler.com