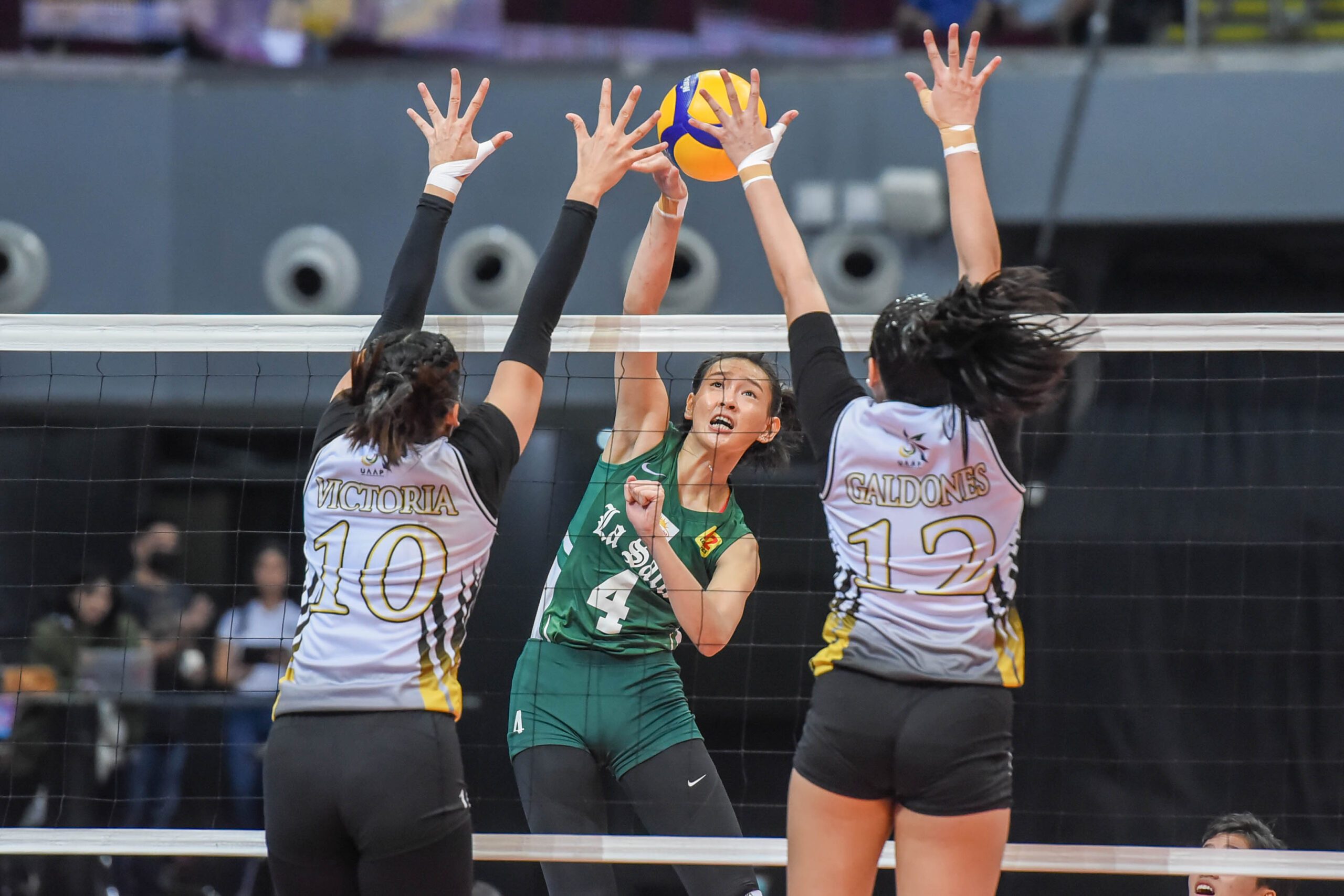 Facebook Twitter Copy URL
Copied
La Salle moves to the cusp of a UAAP women's volleyball Final Four spot after a fourth-set thrashing of UST, while UP stays in the playoff race following a rousing sweep of FEU

MANILA, Philippines – The La Salle Lady Spikers marched to solo second place in the UAAP women’s volleyball tournament after handing the UST Golden Tigresses a fourth-set beatdown for a 25-23, 25-17, 22-25, 25-8 triumph at the Mall of Asia Arena on Thursday, June 2.

Setter Mars Alba steered the offense with 25 excellent sets in the win, paving the way for a whopping five double-digit scoring outputs, led by Leila Cruz’s 15 points, plus 13 each from Thea Gagate and Fifi Sharma.

Fuming after blowing a 22-21 lead in the third set, the Lady Spikers vented their ire on the Tigresses with a 10-2 start capped by back-to-back Malaluan points, and never looked back.

UST only got within 5-12 before La Salle finished the game off with a 13-3 finishing kick, highlighted by a barrage of attacks from multiple scoring sources, and capped by one last attack miscommunication on the España side.

Imee Hernandez and Ypril Tapia each paced the losing effort with 12 points, while MVP candidate Eya Laure scored just 8 on a putrid 8-of-60 attack clip – her lowest and only single-digit scoring performance of the season so far.

UP stays in playoff hunt

Ethan Arce scored 13 off 7 attacks, a game-high 5 aces, and 1 block, while Stephanie Bustrillo chipped in 12 points as UP stayed in the runnning at sixth place with a 5-6 record.

The Lady Tamaraws – already struggling even before the controversial exit of team star Lycha Ebon – simply found no answer as Chenie Tagaod and Jean Asis limped their way to a pair of team-high 6-point finishes.

UP now faces a gargantuan roadblock on its path to the Final Four as it next takes on unbeaten NU at the 10 am opening match on Saturday.

FEU, now carrying a 1-10 slate, likewise has a tall task ahead as bounce-back-seeking UST awaits at 12:30 pm. – Rappler.com