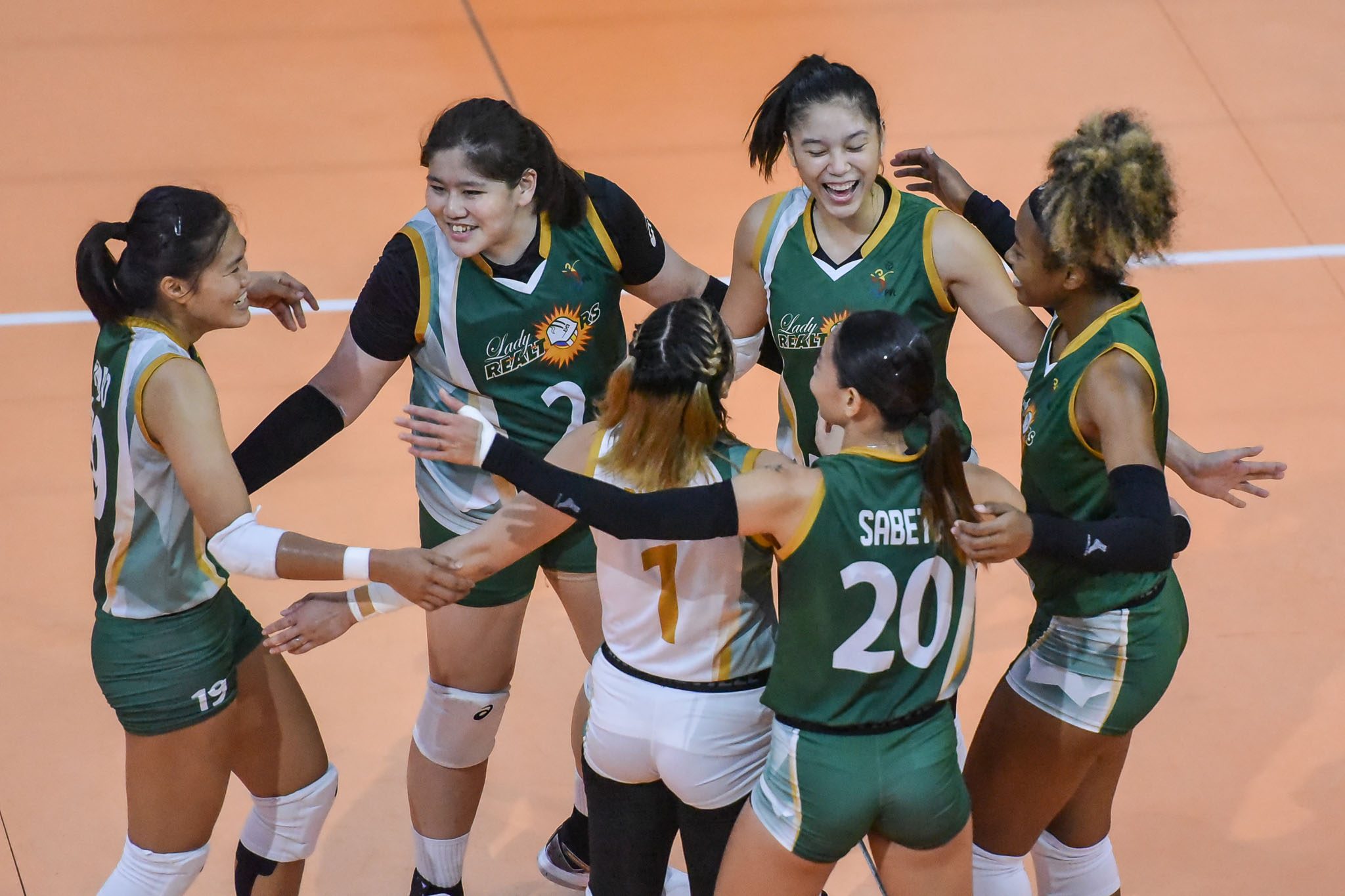 ROLLING. Sta. Lucia chalks up its fourth win in seven games as it rides on a three-game winning streak.

The Sta. Lucia Lady Realtors steadied their revival from near-elimination in the 2021 Premier Volleyball League Open Conference with a three-set demolition of the BaliPure Water Defenders, 25-15, 25-12, 25-14, on Sunday, August 1.

Once down in the doldrums, Sta. Lucia is now back with a winning record at 4-3 off its third straight win as BaliPure headed the other way with its third consecutive setback for a 2-4 slate.

Jonah Sabete led the rousing win with 15 points off 11 attacks, 2 blocks, and 2 aces, while Dell Palomata added 11 markers off 6 spikes, and 5 blocks.

Newly crowned Player of the Week Jovie Prado stood back and let her teammates dish the most damage, but she did chip in 14 excellent digs and 3 points.

After running through the first set, Sta. Lucia then basically destroyed all traces of BaliPure’s comeback hopes after doubling the Water Defenders up in the second, 22-10, off a Phillips hit down the middle.

The Lady Realtors then completed a trifecta of routs in the third to aptly celebrate their third straight win.

Bern Flora and Genevieve Casugod paced BaliPure in another forgettable loss with 5 points apiece, while Prado’s Player of the Week predecessor Graze Bombita mustered only 4 markers.

Sta. Lucia will look to keep its momentum going with a win against the reeling Perlas Spikers at 6 pm on Tuesday, August 3, while BaliPure will try to end its skid against the powerhouse Petro Gazz Angels at 3 pm on the same day.

Even also-ran teams got in on the sweeping action for the day as the PLDT Home Fibr Power Hitters blasted the Perlas Spikers, 25-22, 25-20, 25-21, for their very first professional win.

The Power Hitters at least won’t go back home winless now as they finally broke their six-game losing start that eliminated them quickly from playoff contention. Meanwhile, Perlas is still in the middle of figuring things out as it dropped to a 1-4 record.

Isa Molde topscored in the breakthrough victory with 14 points off 12 attacks and 2 aces, while Jorelle Singh and Chin Bases each chipped in 11 markers.

Alyssa Eroa, meanwhile, earned Player of the Game honors after scrapping for 22 excellent digs and 9 excellent receptions in the morale-boosting win.

After a nail-biting first-set win, the Power Hitters then eased up the pressure on themselves by turning a 12-12 second-set tie to a 19-13 lead off a 7-1 run capped by a Perlas net touch.

The lead ballooned as high as 7 point, 22-15, before Molde closed it out with a kill off the Perlas over-reception.

Although Perlas shored up its defense better in the final frame, its survival was not meant to be as PLDT turned a 19-18 lead to a 25-21 finish off another Molde set-ending hit.

Cherry Nunag was the only Perlas player in double-digit scoring as she finished with 14 points off 11 attacks and 3 blocks.

PLDT will try to start a late-season winning streak as it next faces BaliPure at 3 pm on Thursday, August 5, while Perlas will prepare against streaking Sta. Lucia at 3 pm on Tuesday, August 3. – Rappler.com