It now appears that the Marcoses are unstoppable in monopolizing power in Ilocos Norte. On May 9, they will hold the three highest elective positions: Matthew Marcos Manotoc, the governorship; Sandro Marcos, the first congressional district; and Angelo Marcos Barba (the province’s vice governor when Imee Marcos was governor and Marcos Manotoc was the province’s number one provincial board member), the second congressional district. The Marcos political dynasty tightens even more its grip on Ilocos Norte politics.

Nevertheless, the province is also witnessing the growth and strengthening of an anti-Marcos collectivity. Given how entrenched loyalty to the Marcoses is in the Ilokano psyche, this open and assertive espousal of an alternative politics embodied by no less than Leni Robredo, the archenemy of Ferdinand Marcos Jr., is certainly the most unexpected but most welcome social and political development to spring from this election season.

It is by now a broken refrain that the family of Ferdinand Marcos — Imelda, Imee, and Marcos Jr. — have capitalized on the long-dead Marcos, whose “greatness” lives on in the hearts and minds of many Ilokanos in Ilocos Norte. A third generation is capitalizing on Marcos’ miasma of fabricated heroism and greatness that a small but growing number of Ilokanos recognize.

Necropolitics, or necropower, as Achille Mbembe explains in his 2019 book Necropolitics (translated by Steve Corcoran), refers to “the contemporary forms of subjugating life to the power of death.” It accounts “for the various ways in which, in our contemporary world, weapons are deployed in the interest of maximally destroying persons and creating death-worlds, that is, new and unique forms of social existence in which vast populations are subjected to living conditions that confer upon them the status of the living dead.”

The term has been used to describe the murderous regime of Rodrigo Duterte, whose solution to the country’s drugs problem has targeted the poor and is tantamount to snuffing their life out and to outright disregard for human rights and the rule of law.

In the case of the Marcoses, necropolitics might be taken to denote how the living Marcoses have drawn their political vitality, strength, and power not only from the (dead) Marcos’ legacy among Ilokanos but also from the wealth Ferdinand and Imelda, in their conjugal dictatorship, stole from Filipinos. With both, they are consolidating their hold on power in Ilocos Norte.

In doing so, they also resurrect and revivify the dictator, doing all they can to ensure that his stench does not escape. The dead (Marcos) empowers the living (Marcoses), who in turn are aiming to minimize, if not eliminate, political vitality in the province. Their necropolitics makes a future away from Marcos almost inconceivable. Their necropolitics consigns Ilocos Norte and its people to life conditions characterized by the near absence, or impossibility, of alternatives.

What the Marcoses would never become or do is a Vico Sotto. A Leni Robredo. Why, the Marcoses are the very antithesis of the brand of leadership, governance, and politics that the latter two represent.

In Ilocos Norte, hundreds have become part of a group or collective built from the ground initially by a few individuals and led by ZsaZsa Raval, whose family has historically opposed the Marcoses. Raval is the daughter of Castor Raval, who was the province’s officer-in-charge (OIC) from 1986 to 1988. The “Ilocos Norte for Leni and Kiko Volunteers” or “Ka-INLoVe” is Ilocos Norte’s translation and mobilization into practice of “Mas radikal ang magmahal:” the call to care and fight for even those who consider us their mortal enemies.

The ka in Ka-INLoVe could refer to kadua, meaning an ally or companion. A kadua is someone who will share the burden of responsibility or who will do part, if not half (kagudua), of the work. A kadua is therefore a kabadang, someone who shares and helps in carrying the load.

A Ka-INLoVe is thus a fellow Ilokano from Ilocos Norte who shares the burden and task of bringing forth a different kind of politics in the province. As such, a Ka-INLoVe is a relationship premised on the sharing of principles and the recognition that such principles need to be lived and shared with others. It is based on solidarity. And it generates more solidarity because it entails braving and taking risks. The experience of abuse and harassment brings with it compassion for each other, engenders encouragement, and strengthens one’s resolve to continue because they discover the inner courage they have. Their commitment to working for the leadership and society they envision becomes deeper. 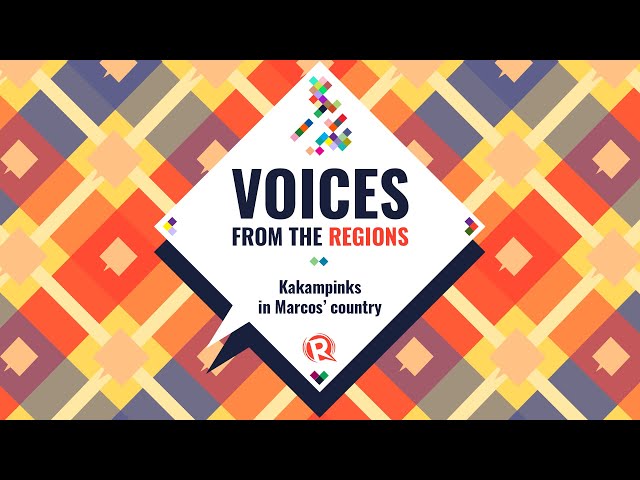 An image from the activities of Leni supporters in Ilocos that has generated controversy and heated debate is that of a man holding up a placard that says “MMSU students for #LeniKiko.”

The comments of Marcos loyalists clearly expect Ilokanos to be loyal to the Marcoses. And that loyalty must also demonstrate gratefulness to the Marcoses especially from those who are studying at the Mariano Marcos State University. These rabid statements echo those thrown at an MMSU teacher who had earlier made what were quickly perceived as anti-Marcos statements. Critics vilified the teacher as having no shame and no business working at the state university if he held such disloyal positions. To be sure, the argument was well-informed and the teacher had made every effort to present it dispassionately, without making their position ambiguous.

Those who are on the opposite side of Marcos loyalists were quick to point out that students do not owe the Marcoses anything. MMSU, as its name clearly indicates, they said, is a state university. It is funded by taxpayers. They also strongly asserted that just because the university carries the Marcos name does not mean students have to be Marcos supporters. MMSU students should be free to support whoever they want to support and should have the freedom to publicize their choice without being accused of betrayal.

The Ka-INLoVe has rightly earned the distinction of being the bravest of all Leni-Kiko supporters. In a province still high on Marcos, or for one that derives its pride and identity from Marcos, these enlightened Ilokanos have faced harassment and abuse from fellow Ilokanos who cannot abide their betrayal not just of Marcos but also their being Ilokanos. For dyed-in-the-wool loyalists, these Ka-INLoVe have no place in Ilocos Norte. In contrast, Ka-INLoVe, as a collective and movement, aims for nothing but revitalizing politics and governance in the province, a revitalization that would require not just removing the Marcoses from power but changing the value system that has for so long determined politics in Ilocos: the blind loyalty to and worship of the Marcoses. As the experiences of both Ka-INLoVe campaigners and students show, Ilocos Norte people who desire an alternative to Marcos necropolitics are not only up against the formidable power generated by the (stolen) wealth of the Marcoses but also the cultural script that equates Ilokano-ness with Marcos loyalism. But the voices of anti-Marcos Ilokanos are growing louder and bolder. Those who have disavowed the Marcoses are becoming more courageous in occupying space, in coming out, in becoming more visible. They are reaching out to others.

It will certainly take a long time to nurture and grow this movement. It will take even more commitment to do so with a Marcos Jr. victory in the May elections. But sustaining it will be even more necessary. Even with a Leni Robredo presidency, rebuilding the country and Ilocos Norte from the ruins of a dysfunctional politics will be challenging and fraught with tension and conflict.

It will be an arduous struggle to disentangle or sever Ilokano identity and Marcos loyalty especially with the Marcoses’ domination of politics in Ilocos Norte. But the grassroots, people’s initiative to campaign and fight for a different politics brings hope that Ilokanos will not be cowering or suffering in fear and silence. They have seen what they can do and have felt the power of working together. This is what makes the anti-Marcos collective and movement potentially the most consequential and generative for the political culture in Ilocos Norte. It is the alternative to the traditional, dynastic politics in Ilocos Norte.

Roderick Guerrero Galam is a senior lecturer in sociology at Oxford Brookes University. He was born and grew up in Ilocos Norte.