Ferdinand “Bongbong” Marcos Jr. is now the president-elect, and he will assume office on June 30.

That is something that the entire nation has to live through in the next six years.

Like a plane, the Marcos Jr. administration is now on the runway, picking up speed, and about to take off. His and his family’s records tell us that he is the last person that should be in the captain’s seat, but what can the plane’s passengers do at this time?

For the religious, pray – because there’s a storm ahead, and it’s likely going to be a long and turbulent flight.

For the irreligious, close your eyes and wish – because this is no nightmare. This is reality, folks.

We, the passengers, cannot wish the pilot ill. If he bungles, then the plane would crash with all of us in it.

The end can never justify the means, but this generation would need to come to terms and deal with this sad reality. We cannot spend the next six years of our lives whining about the May 9, 2022 elections outcome. The nation did not see another Marcos presidency coming more than a decade ago. The idea would have been dismissed as a mere joke then given how wildly unreasonable that sounded. Ten years ago, this would have been in the category of the claim about the divinity of Jose Rizal.

I asked someone I know who is indifferent toward politics to do a YouTube search about any topic. She picked Norway.

I asked her to click it, and then we scanned through the next set of videos. What we saw was a list that included several videos produced to deodorize the late dictator, his martial rule, and his family, or demonize those who fought the Marcoses. One was entitled, “Who Ordered the Assassination of Ninoy Aquino?”

Twice, I asked her to pick another topic any adult (read: voter) would choose. Either there was something about the Marcoses, the Dutertes, or anything that would interest Filipinos old enough to vote. Once played, it led one to more Marcos-inspired disinformation videos.

In her case, interestingly, there was barely any video on the menu that was friendly to those who stood up to the Marcoses.

Millions of Filipino netizens have repeatedly been fed with rubbish since 2016 or even much earlier. I guess that’s how this beast called algorithm works, something that would have given the likes of Goebbels a thousand wet dreams.

What can be done to undo this monumental damage at this time? Nothing, unless there is a time machine or a restore point button we can click that would enable us to stop this malware from corrupting our democracy. 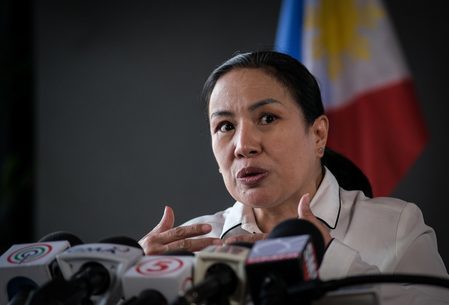 So, now, we are left with no choice but to wish – or pray – that the Marcoses have not returned to power to exact vengeance, and that the new administration would do well by landing the plane to safety. I, for one, wish to be proven wrong about my apprehensions.

For starters, wouldn’t it be a welcome surprise for the next president to lay down a clear policy about respect for fundamental civil liberties, and then show the world that he walks the talk?

Second, they need to rid their system of this obsession with historical distortions because that would only do the incoming administration no good. Those who know the truth will hold the line. Any attempt at corrupting history will be provocative and revolting. Therefore, the obsession is counterproductive.

Disinformation resulting in behavioral modification already served the Marcoses their purpose. Like epidemic hysteria, this phenomenon looks like a form of groupthink, which is bad because it causes people to reject important information needed for sound decision-making.

The outcome was a political feat regardless of whether or not those who voted liked it, and how the community of nations sees the majority of Filipino voters now. In the eyes of the world, we just ate our vomit.

The president-elect’s sister, Senator Imee Marcos, told CNN Philippines on the day of his proclamation, “What’s most important to us is, of course, our name, the family name that has become so controversial, and so difficult at times to bear. The legacy of my father is what we hope will be clarified at last.”

That gave us a glimpse of what to expect under a second Marcos administration, straight from the horse’s mouth.

Regardless of the 2022 elections outcome, the fact remains that the Marcos patriarch resorted to dictatorship in 1972 shortly before he was supposed to end his final term of office, and stayed in power until the early part of 1986. In the process, he bulldozed institutions that stood in his way and trampled on civil liberties. His legacy to his family was to leave them his ill-gotten wealth.

No amount of deodorant will remove that stench.

The Marcoses need to realize that any attempt to distort historical facts is going to be a futile exercise. The most that they can do is sugarcoat the excesses and atrocities during the years of dictatorship, momentarily. The more they deny or distort it, the more the survivors and the families of victims would get infuriated.

Also, the world cannot be fooled because the facts have long been out in the open, scrutinized, and validated.

Yet he and his family were given this chance regardless of the means used to facilitate their shocking return to power.

Marcos Jr. cannot be judged for the things he has yet to do. He has yet to write the final chapters of his personal history.

We can wait and see and wish that he would do what is right. He can do well if he chooses to, and prove his doubters and critics wrong.

But by no stretch of the imagination can he undo what his father and family did.

An acknowledgment will be the first baby step to national healing – and unity, perhaps. Marcos Jr. can start by coming out clean, and acknowledging the abuses committed during his father’s infamous reign. That takes humility, which is a virtue that characterizes upright leadership.

Then he can show this country and the world what his call for unity is all about. But he cannot do this when the people around him are doing the exact opposite.

Herbie Gomez is the regional coordinator of Rappler’s Mindanao Bureau.