Facebook Twitter Copy URL
Copied
The book is both cerebral and tender. It discusses moments in time that Filipinos still very much alive today have lived through – from Ferdinand E. Marcos to Ferdinand R. Marcos Jr.

LONDON, United Kingdom – The tickets to the launch of Nobel laureate Maria Ressa’s book, “How to Stand Up To A Dictator,” were sold out. Some attendees had to stand at the back of the room by the bar at The Conduit in London, a creatives and thinkers club, because all seats were taken. Ressa, a journalist of 36 years, was not able to keep any of her schedules (she was booked by the hour) because of the volume of people who want an autograph and a photo with her.

Ressa’s rockstar treatment in London was in stark contrast to the situation back home, especially online.

“Queen of fake news,” said a comment posted on the Rappler livestream. On Twitter, a Duterte supporter was defensive: “Who’s the dictator? Duterte who stepped down from the presidency after six years?”

The online hate and the discrediting of many Filipino journalists are what Ressa talked about in the book, named by the popular London bookstore chain Waterstones “as among the best political books of 2022.“

Ressa launched it, with London as the first stop, during the honeymoon period for the new president, Ferdinand Marcos Jr., son of the disgraced dictator ousted by a People Power revolution 36 years ago. The 32 million votes of Marcos – among the biggest in Philippine electoral history – is more or less the same base of former president Rodrigo Duterte, the dictator referred to in the book. Or, one of the dictators, among them Facebook’s Mark Zuckerberg.

“I think we have to look beyond politics, we have to look at values. I don’t believe our values have changed, I think Pinoys are the most sensitive and empathetic, and that’s why I chose the Philippines, we have to remember the good,” Ressa said in an interview with this reporter at the end of the launch on Wednesday, November 23.

Her agent, who looked on, was raring to whisk her away because she had to catch a red-eye flight to Madrid, where she would continue to advocate against the dangers of social media. 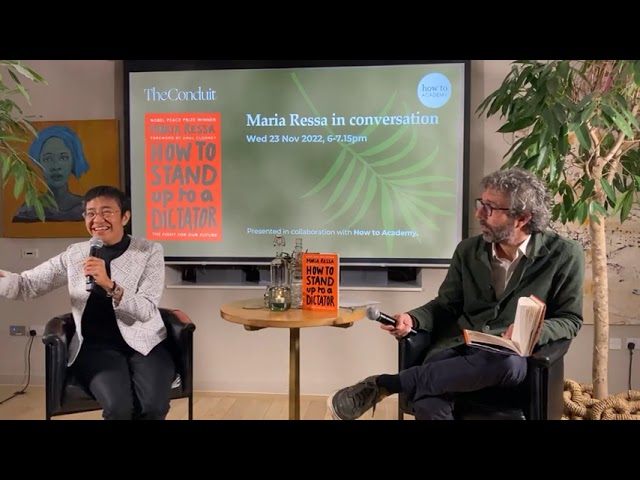 Earlier on Wednesday, at the University of Wesminster for a “Women in Journalism” talk, Ressa said: “I don’t believe that these are the values of Filipinos, I don’t believe that we think it’s okay to kill,” referring to the online army defense of Duterte’s bloody drug war. Human rights groups say this so-called “war on drugs” has killed up to 27,000 people in six years. It is now under investigation by the International Criminal Court (ICC) for alleged crimes against humanity.

Which is why for the better part of the tumultuous Duterte presidency, Ressa – who specialized in tracing terrorism networks especially when she was with CNN – pivoted to disinformation data: Are people really that vile, or have the platforms enabled hate to thrive? As she explains in her book, it is the latter.

“What’s happening in the Philippines would not have happened without Silicon Valley and Facebook,” Ressa said at the launch Wednesday evening, hosted by How to Academy and The Conduit’s co-founder Paul van Zyl.

Beginning September 2016, as the drug war death count soared, Ressa and Rappler published a series on the weaponization of the internet. Rappler was pummeled after that. Today, Ressa is convicted of cyber libel (on appeal), on trial for five tax charges, sued for two more connected to securities, and Rappler is always on the brink of closure, no thanks to a buzzer-beating move of the Duterte government to affirm a shutdown order in the last two days of its presidency. Ressa was in London on a travel bond, which had to be applied for and secured laboriously before many courts – the latest the Supreme Court where her appeal on her cyber libel conviction is pending.

Ressa writes in her book about the weaponization series that set off the many nightmares of Rappler and its staff: “I have no regrets. I would do it all over again.”

The chapter after that begins with a photo of a beaming Ressa with Zuckerberg’s arm around her. It was a meeting in California in 2017, one of Ressa’s futile attempts to convince big tech to change their ways for the good. She talked about her disappointments with the “tech bros” in detail in her book.

She also wrote in great detail about her personal life which, as with most journalists, is not easy. Journalists are never the story, but to make sense of what had happened and why Rappler chooses to hold the line, Ressa had to go as far back as her early childhood to the formative and explorative periods of adulthood to figure out why she would later stand up to a dictator.

“All of the things we live through is translated to data, and I began to understand it, and people kept asking me, ‘How do we react to it?’ And the response to how we react to it is layered upon layers of layers of values. I’ve never written quite like this, it’s all the whys in one place, but I feel old enough,” said Ressa. 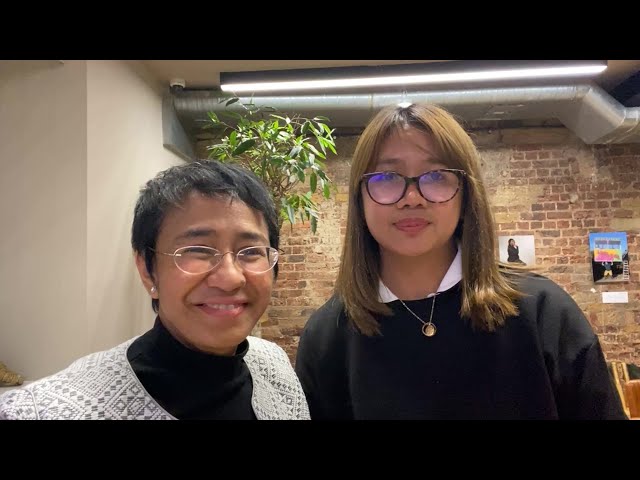 In How to Stand to a Dictator, there are intimate looks into the toughest calls she had to make as a journalist – from getting news reporter Ces Drilon out of captivity from terror group Abu Sayyaf, to handing in her resignation as head of News and Current Affairs of ABS-CBN.

At the University of Westminster, she recalled the day she and the co-founders of Rappler – all women, fondly called manangs (older sisters) – told the staff in 2018 that the Securities and Exchange Commission had revoked the company’s license. “Everyone has a different risk level, and I said if you or your parents are afraid, tell us, and we will try to place you in a different news organization. And I have to tell you not one of our editorial team wanted to leave, it was scary as hell but it’s almost like – coal under the greatest pressure becomes diamond.”

“Journalists sacrifice because it is the right thing to do at this moment in time,” said Ressa at The Conduit, pitching a three-fold approach to “winning the last two minutes of democracy,” the last one being, “demand better journalism and make journalism an antidote to tyranny.”

‘We’re not a sinking ship’

The book discussed a pivotal moment one day in London in 2020, during a meeting with international lawyers led by Amal Clooney, when Ressa was pushed to seriously think about this question: What if I just don’t come back?

“It was the first time in a long time that I felt alone,” Ressa wrote, but “[the Philippines] is where I have to be and it’s what I have to do…there is no other choice.” At a gathering exclusive to Filipinos on Saturday, November 19, Ressa said: “What I don’t like are rats deserting a sinking ship. And we’re not sinking, not yet.”

Ressa likes to quote Milan Kundera: “The struggle of man against power is the struggle of memory against forgetting.” She also likes to warn against TikTok, and its central role in what Shoshana Zuboff called surveillance capitalism.

Ressa’s book is both cerebral and tender. It discusses moments in time that Filipinos still very much alive today have lived through – from Ferdinand E. Marcos to Ferdinand R. Marcos Jr. And there’s something for everyone to take away.

My takeaway was very pessimistic, one I told Maria in a personal message and whose content is confidential until it’s not. But I leave you with Maria’s takeaway, and by doing so, breaking confidentiality also. But I thought you should know.

“We can win this if we stay the course.” – Rappler.com