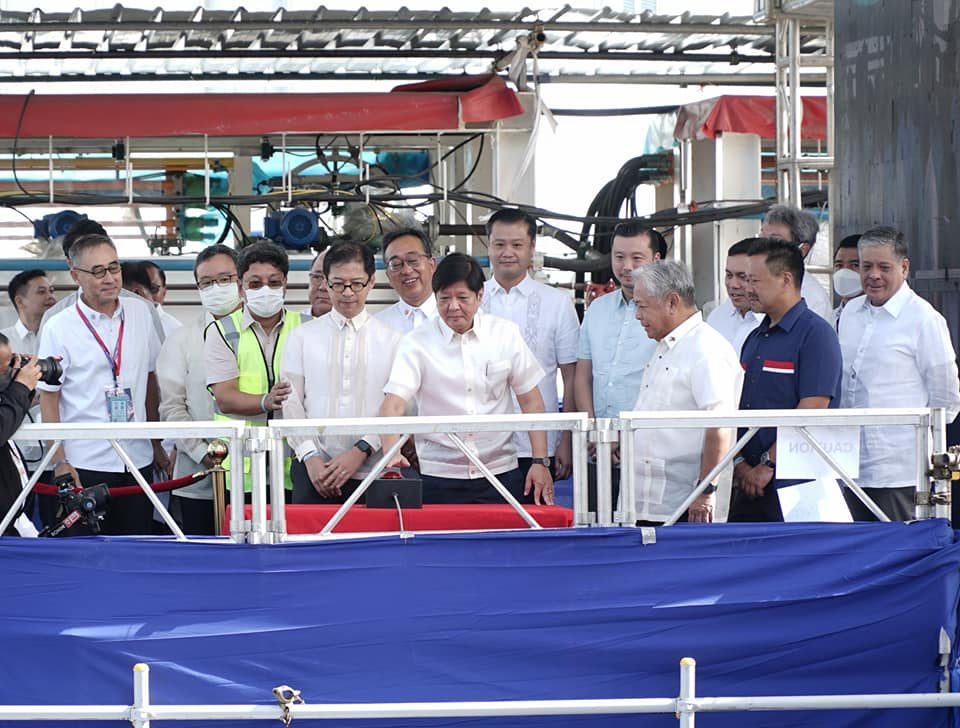 SUBWAY. President Ferdinand Marcos Jr. presses a button to launch the tunnel boring machine for the construction of the Metro Manila Subway Project tunnels on January 9, 2023.

Facebook Twitter Copy URL
Copied
President Marcos hopes the delayed subway's first three stations will be ready by 2027. Once completed, it will stretch from Valenzula City to Parañaque City, with a station at NAIA Terminal 3

“Let the launching of this tunnel boring machine become a testament to this administration’s commitment to continue the projects of the previous administration and – more  importantly – build better more,” Marcos said on Monday, January 9, in a ceremony at the Valenzuela subway depot.

Variously described as the “project of the century” and the “crown jewel of the railway sector,” the MMPS will stretch across eight cities from Valenzuela City to FTI-Bicutan in Parañaque City. A spur line will also serve NAIA Terminal 3 in Pasay City.

Monday’s launch of a tunnel boring machine marked the beginning of actual construction for the subway tunnels, as part of the MMPS’ Contract Package 101. This package covers the construction of the East Valenzuela Station at the subway’s Valenzuela depot, and three underground stations in Quezon City: the Quirino Highway station, the Tandang Sora station, and the North Avenue station.

Kazuya Osako, chairman of the joint venture committee, explained that it would take about 12 months to complete a tunnel connecting two stations since the speed of tunnel boring is currently 180 meters per month.

“Today’s start of tunneling work signifies the point of no return. We are going full speed ahead to complete the country’s first subway,” Transport Secretary Jaime Bautista said. “This ambitious 33.1-kilometer train system of the Philippine national railways, which we dubbed the ‘crown jewel’ of the railway sector, will not be sidetracked from getting completed according to schedule.”

Once completed, the MMPS will have 17 stations and service up to 370,000 passengers a day. The subway, which costs upwards of P488.4 billion, has been mostly financed by loans from the Japan International Cooperation Agency (JICA).

“The launching of the first tunnel boring machine of the first civil work contract under the first-ever subway project in the very first month of this year. Finally, we make our dreams come true with the cooperation of Japan,” said Sakamoto Takema, chief representative of JICA.

“JICA reiterates our full cooperation to realize Japan-quality public transportation systems. Kasama ‘nyo kami (We are with you). And I’m confident we can cooperate further and in a productive manner in the spirit of bayanihan,” Sakamoto said.

‘Project of a century’’

“Looking back, this Metro Manila subway was planned exactly 50 years ago in 1973. The plan was first initiated during the time of the late president Marcos Sr. Decades later, it can be considered a legacy that is now in the hands of His Excellency President Marcos Jr. to fulfill,” said Matsuda Kenichi, minister and deputy chief of mission for the embassy of Japan. Currently, the MMPS is lagging behind the initial schedule of the Department of Transportation (DOTr), which aimed to have the subway’s first three stations operational by 2022. Sakamoto said that various challenges – including land acquisition, right of way matters, timely budget allocation and contract payments, and the COVID-19 pandemic – had delayed the project.

In his keynote speech, Marcos urged representatives of the joint venture working on the subway to have the MMPS partially ready by 2027.

“I hope that both you and the DOTr will not waver on your commitments to finish the contract package by the end of 2027 to ensure that Filipinos will get to enjoy the project at the soonest possible time,” Marcos said.

“Given our timelines, I would like to emphasize to our countrymen that big-ticket projects such as this take years to be completed.” – Rappler.com