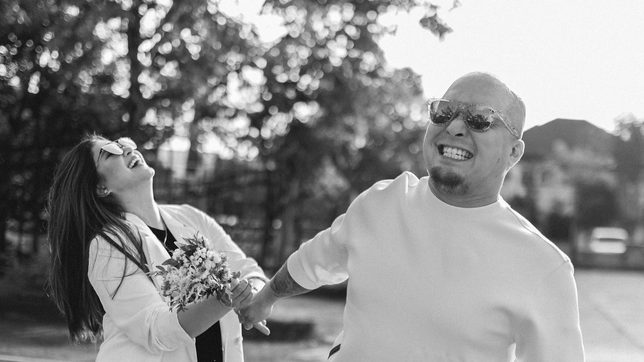 In a vlog posted on Saturday, August 14, the newlyweds revealed that they originally didn’t plan to release the video from their wedding but following their marriage announcement, they decided to share details to their fans and supporters.

The couple said they began planning their wedding in 2019, three weeks after their engagement. Footage from Neil’s proposal was also included in the vlog.

Neil said they already found a wedding venue, settled things with their wedding planner, and even had a prenup shoot in Finland scheduled, but their original plans were all affected by the COVID-19 pandemic. The couple eventually decided to push through with a civil wedding ceremony at the Taguig City Hall, with only a few friends and family in attendance. The wedding was presided over by Mayor Lino Cayetano.

Angel and Neil said they got married on July 26, the same day weightlifter Hidilyn Diaz won the country’s first Olympic gold medal. They first announced their marriage to the public on August 7.

It was as low-key as you can get – the couple only bought their outfits at the mall the day before, the menu consisted of milk tea, fries, and street food, and Neil asked guests to go home early because he had golf the next morning.

They also didn’t have vows or rings ready, mostly because they wanted to reserve those for their eventual church wedding. In the end, Angel used the duplicate of their engagement ring and Neil borrowed his son’s ring for the ceremony.

(The most perfect description of this wedding is ‘simple but rock’… Whatever happened in this wedding, we had a personal touch to it. It’s very intimate, very simple, very us.)

Angelo Colmenares, Angel’s father, spoke during the ceremony. “I wish you happiness throughout your lives but this could only be achieved if you take good care of each other day by day. And much more if you put Christ in the center of your lives… I am now 94 years old and I wish that Neil and Angel will soon give me a grandchild,” he said.

Angel and Neil first confirmed their relationship in 2018. – Rappler.com