For as long as you listen, Ebe Dancel will keep playing MANILA, Philippines – When Ebe Dancel, self-professed tito and writer of the most poignant love songs in OPM, tells you you’re going to have fun, you will have it.

And so on February 29, in an event as rare as the date itself, Ebe held his first solo concert featuring the Manila String Machine. “The way I want to celebrate tonight is that I talk less and play more songs. I hope that’s fine,” said Ebe after playing several songs, including the painfully hopeful “Prom,” in succession.

It was a celebration of and for Ebe, and the thousands who’ve made him the music icon he is today. (“Going solo,” as Ebe pointed out, is a misnomer – it takes a village to stay and make an impact in the industry for so long.)

The night was special, for sure. Ebe was celebrating 20 years in the music industry and releasing Baliktanaw, a new album composed almost entirely of old songs: Sugarfree classics rerecorded and rearranged.

But there was once a time when Ebe Dancel never wanted to play music again. In 2018, Ebe, in his own words, was practically on “auto-pilot.”

“It was like I lost my sense of purpose as a musician. Sometimes, I was on auto-pilot [when singing songs] and I came back to reality after the song. I think it’s a disservice to the stage, to my bandmates, to my manager and to everyone who loves me,” Ebe had said in September 2019, during a press conference for the February 29 concert.

This is the part where one pauses to imagine – if you can – a life without Ebe Dancel’s songs. The aforementioned iconic “Prom,” for instance, has served as the soundtrack to the best love stories – both on cam and in real life. “Tulog Na,” a song Ebe wrote for a friend who had insomnia, has since turned into a modern-day lullaby that mothers have thanked him for writing.

“Wag Ka Nang Umiyak,” at one point, turned into a meme and was covered several times over for several movies and TV series.

“Cuida,” while not as popular as other Sugarfree songs, was a crucial addition to the walang tapon Ang Nawawala soundtrack (“Cuida” had been unreleased prior to its inclusion in the album) and is one of his more simple and poignant songs.

“Bawat Daan,” my personal pick for the best Filipino love song ever written (ever ever), has graced everything from wedding marches to praise and worship sessions. (“Maligaw man / At mawala / At umikot man / Sa kawalan / Sa bawat kailan / Sino’t saan / Ikaw lamang ang / Kasagutan,” sings Ebe with all the hopefulness we need in this world.)

(The version played at the concert, with violins from the Manila String Machine, cuts even deeper.) 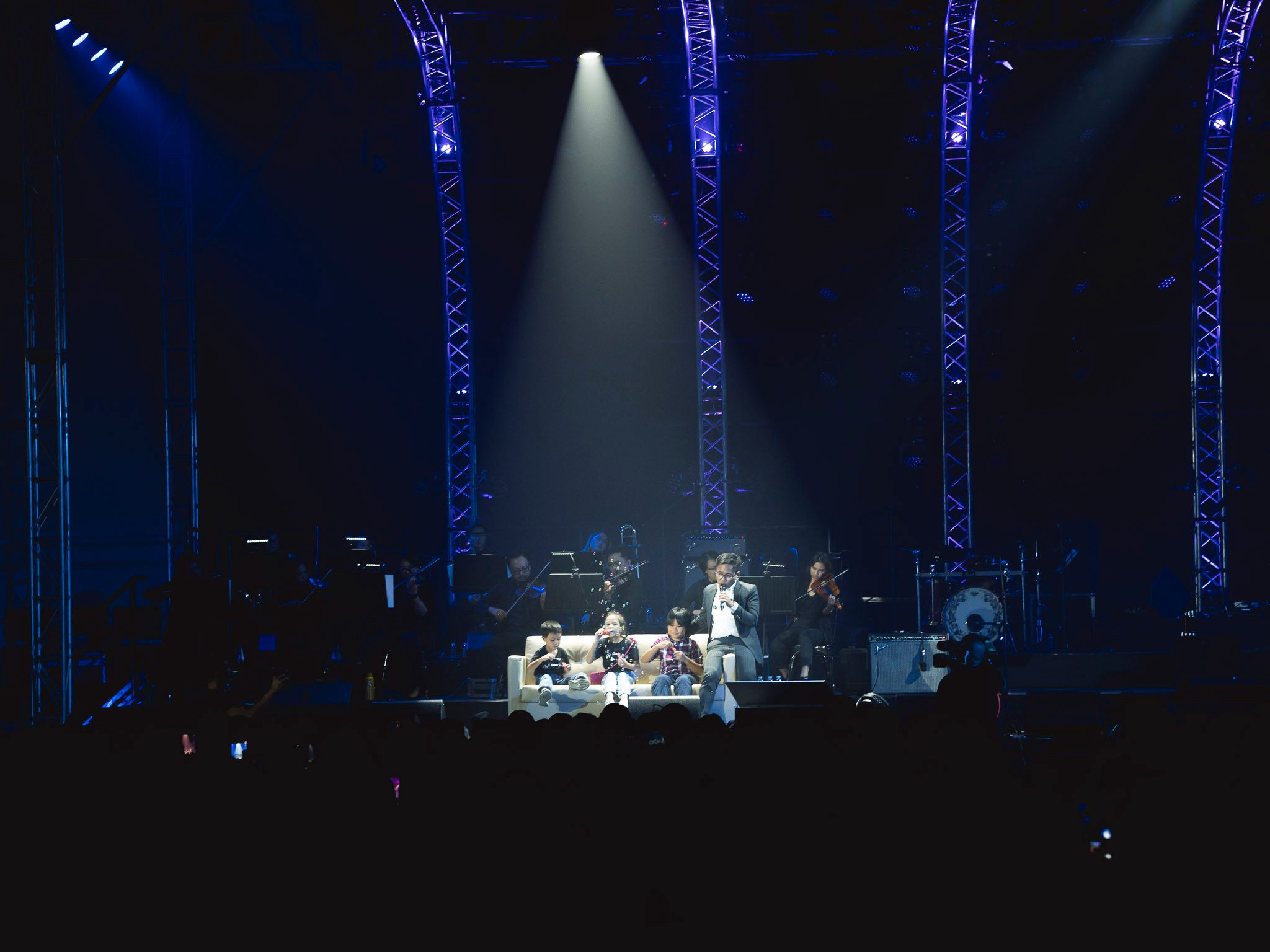 Ebe told his longtime manager, Trici Nicolas, that he was going to take a break. For how long? “We’ll see” was what he told her.

“But what I really meant was I never want to play again,” he told media in September 2019.

For over 10 months, Ebe was nowhere to be seen. There were no Conspiracy gigs, no 3D performances, no new music. The streak broke for a gig that would benefit Pitbulls in Laguna, his home province.

And it was around that time when Ebe, already a celebrated icon, finally realized his purpose.

“There are doctors, lawyers, and musicians, and I really feel that my purpose on this planet is to be on stage, to play, and to make people happy… or sad,” he said.

So sing and play and perform, Ebe did.

On February 29, he released Baliktanaw, a full album of rerecorded Sugarfree classics and one new song, “Hanggang Kailan Kita Mahihintay.” The idea was to release improved versions of his classics, Ebe said, because improvement should always be at the heart of what one does.

I find it hard to call the new versions better, partly because of the sentimentality tied to the first studio versions of the song. But they do, in way, reveal a new layer of universal truth in the songs.

“Burnout,” a song Ebe says isn’t about love at all, begins with an audible sigh and “okay” from the singer. Has he bid musical burnout goodbye too? Or is he saying that just like him, we can survive and thrive despite the burnout?

“Mariposa,” a song about loneliness and longing, is somehow more dramatic when it’s stripped down – just Ebe’s voice and a piano. “Unang Araw,” a post-breakup anthem, feels more vulnerable when it’s sung a cappella. “Cuida” almost feels like a different song this time – more world-weary, a little more upfront about the difficulties of love, while still managing to be hopeful.

Ebe is the first to admit he’s not the same artist from 20 years back.

The songwriting process isn’t as fast (he used to write a song a day when he was in Sugarfree) and, perhaps a testament to how age can make you wiser, he knows when it’s time to hit pause.

That’s not to say that things have been much easier since.

In 2015, Ebe was diagnosed with depression and anxiety, which he suspects he’s had since he was a child. He’s never shied from this fact and has, in a way, become an advocate to normalize mental health talk and the eliminate the stigma that still comes with issues of metal health.

“A big part of it is that I know I’m not alone. And someone out there is feeling the exact same thing. It’s always very important to remind each other that we are not alone,” he added, before playing an acoustic version of “Wag Ka Nang Umiyak.” (“At kung pakiramdam mo’y / Wala ka nang kakampi / Isipin mo ako dahil puso’t isip ko’y / Nasa yong tabi.”)

And alone, Ebe Dancel is truly not – whether he realizes it or not. Every Ebe gig, whether it be solo or with old and new collaborators, always feels intimate. His concert at the massive Metrotent Convention Center, didn’t feel any less so. Ebe Dancel is just that kind of artist, who can make you feel like he’s singing to you, whether you’re in a cramped Conspiracy Cafe or a vast hall with a full orchestra to back him up.

It probably helps that Ebe isn’t afraid to bare his soul to whoever listens. “I’m really exhausted. But this is all worth it. This feels like a dream,” said Ebe before a heart-wrenching performance of his last song that night, “Bawat Daan.”

Twenty years in an industry as potentially egotistic, cutthroat, unkind, and simultaneously soul-enriching as the one he’s in, is no easy feat. That Ebe is thankful he’s made it, and will continue to make it, isn’t lip service.

The world is a different place from when Ebe Dancel first picked up a guitar and performed in public (the instruments he and his band used for their first gig ever were not theirs – they borrowed it from another band and had to return it before their set was even done).