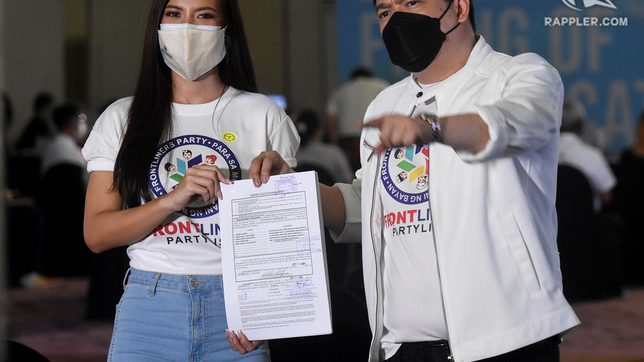 The United Frontliners of the Philippines party-list files their Certification of Nomination and Acceptance for the May 2022 elections at the Sofitel hotel in Pasay City on October 7, 2021.

Newly-crowned Miss World Philippines 2021, Tracy Maureen Perez, gave a brief speech on Thursday, October 7 in support of the country’s pandemic frontliners – but not at a venue you would expect.

At Sofitel’s Harbor Garden tent in Pasay, amidst people filing their certificates of candidacy for the 2022 national elections, Perez took the podium where aspiring government officials made their post-filing speeches, and gave a quick message.

(As I prepare to take home the [Miss World] crown for our country, I also offer my voice and my platform in order to further the rights of our frontliners. When I was asked what the most important lesson was that we should all learn after this pandemic is over, I mostly hoped that we would give value to the simple things we often take for granted: our health, our time with our family, and most of all, the people who risk their own lives in order to protect us. They are our modern heroes. They are our frontliners.)

Perez was there to accompany film producer and former actor Jayke Joson, who was the first nominee of the new Frontliners Partylist.

Joson was present at the oath-taking of Arnold Vegafria, National Director of the Miss World Philippines Organization, into the PDP-Laban Party. Vegafria is also presidential aspirant Senator Manny Pacquiao’s longtime business manager, and is himself running as mayor of Olongapo.

Melvin Matibag, PDP-Laban secretary general, said Joson was a “close friend of Pacquiao and is supporting Vegafria and PDP-Laban.” – Rappler.com