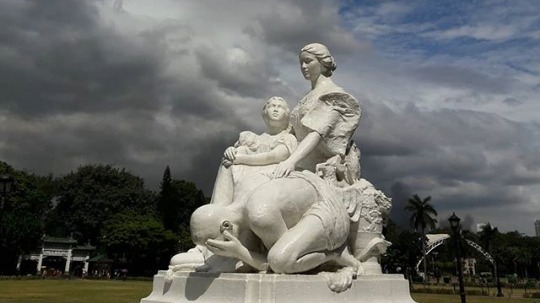 MANILA, Philippines – A pre-war sculpture, La Madre Filipina, was returned to its original location on Jones Bridge on Saturday, November 23, a few days ahead of the inauguration of the newly-restored bridge.

La Madre Filipina, sculpted by Ramon Martinez, is one of 4 statues depicting the nation as motherland that were placed on the pillars of Jones Bridge before World War II. It was moved to Rizal Park in the 1960s, while the two other statues were moved to the Court of Appeals, where they still stand.

The fourth sculpture was destroyed in the war, though a replica has been installed on Jones Bridge as part of the recent restoration.

La Madre Filipina A relic from the pre-war Philippines, La Madre Filipina (“The Filipino Mother”) depicts a sculpture of a mother comforting her weeping son. Alongside the mother is her daughter looking innocently at her mother’s face.  It was created by master sculptor Ramon Martinez. This statue was once part of the pre-war Jones Bridge in Manila. (Source: NPDC) #InstaKultura #KulturaPH

On November 22, the Manila government and the Department of Tourism along with the Intramuros Administration and the National Parks Development Committee (NPDC) signed an agreement to return the statue to Jones Bridge.

Manila Mayor Isko Moreno posted a video of the statue as it was being placed on the bridge early on Saturday morning.

The restored Jones Bridge will be inaugurated on Sunday, November 24. – Rappler.com