Why is it important to tell human rights stories through art? Moderated by Happy Feraren, invited speakers shared their challenges and experiences in telling stories on human rights abuses in the country. Activist Mae Paner, photojournalist Raffy Lerma, and Rappler multimedia reporter Rambo Talabong were the guests of the live chat.

Mae Paner is the director and actor behind the film Tao Po, in which she conveys four character monologues that each give a human face to the issue of extrajudicial killings (EJK) during President Rodrigo Duterte’s drug war.

Raffy Lerma is a freelance photojournalist who exposes human rights abuses through powerful imagery. He was behind the viral drug war photo that mimics Michaelangelo’s Pietà.

Feraren started the live chat by asking about the challenges faced by the speakers in telling narratives on human rights.

For Paner, it has always been a challenge for people to watch her film, Tao Po.

“When people get to watch the film, they say that it has a very strong message [and] a lot of people should see it. But to get them to actually watch it has been a challenge,” said Paner.

On the part of Lerma, his challenge as a photojournalist was in covering the same topic over and over again.

“I have been doing this since 2016, and honestly para na akong sirang plaka minsan (I feel like a broken record sometimes),” he shared.

He added that it is hard to get empathy from Filipinos, but that he has to keep telling stories in order to create awareness.

Meanwhile, Talabong shared that the challenge for journalists is the huge number of violations they have to cover. 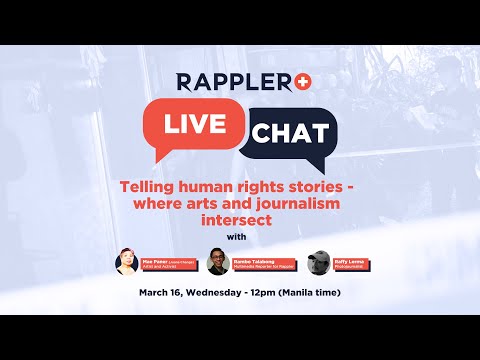 Barriers for artists in speaking out

Paner shared that she had tried approaching other artists and directors for projects before, but most of them did not want their works to be politicized – though this is slowly beginning to change.

“They are really fear-based actually, but that was then. I think now more and more, there are artists who are actually speaking up, making their voices heard, singing songs, dancing, painting,” said Paner.

She believes that artists have the responsibility to talk about issues through art, as these issues affect one and all.

How do they tell their stories?

Paner made sure what was conveyed in her film reflected what had happened in reality.

“We also need to fight and assert the validity of our power to tell these stories, aside from [having to] be sensitive [to our subjects],” said Talabong.

Talabong added that it is hard to get the trust of readers if journalists themselves are close-minded.

The impact of their work

Lerma shared that after he shot what people called the “EJK Pietà,” it got a lot of attention and was even mentioned in President Duterte’s 2016 State of the Nation Address.

“[But] you have to defend ‘yung truth, you have to sa stories mo, ‘yung photos mo,” he added.

Paner recalled how one lady who had seen her film in London had cried during the screening.

“I think her father is in jail up to now for drugs, and after seeing Tao Po she said, ‘even if my mother actually committed suicide and my father did not know about it, that was really because of the way he has been using drugs.’”

Paner said that she was touched when the lady said that addicts should be given a chance.

The live chat was held via Facebook Live, and Rappler+ members were exclusively invited to join the private Q&A after on Zoom. – Rappler.com