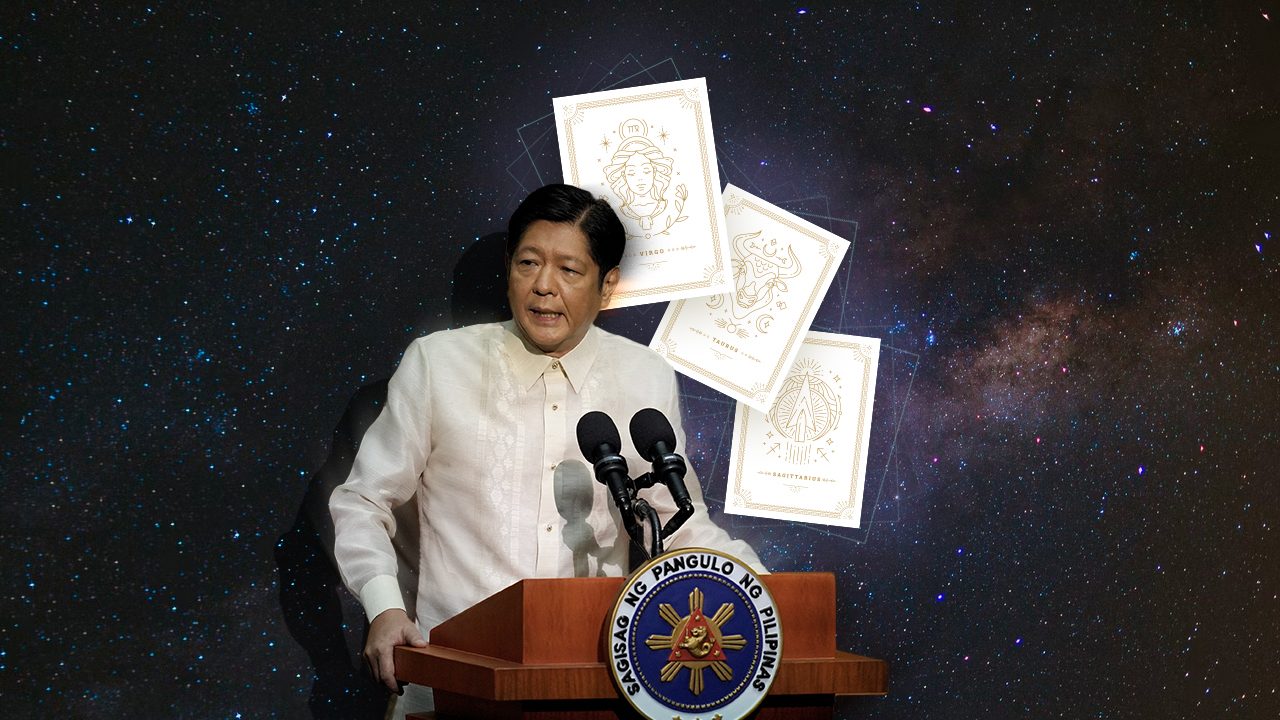 MANILA, Philippines – Stars have served as guides since the dawn of time. Our forebears have looked into the skies to see the cosmic truths embedded in heavenly bodies. Luckily for us, such practices were not lost with popular astrology.

One can still get a glimpse of the past, the present, and the future – if one knows where to look. In popular astrology, a person’s birth chart shows the location of the constellations, the sun, the moon, and the planets in the sky at the time that they were born. It’s been said that the location of each heavenly body could provide insights regarding a person’s innermost thoughts, motivations, and desires.

A few months ago, the late dictator’s son, Ferdinand “Bongbong” Marcos Jr., came to power as the 17th president of the Philippines amidst a pandemic and an economic crisis. Although the Filipino people were divided on whether this warranted mourning or celebration, a single question united both parties: what now?

We once again look to the stars for guidance. The 64-year-old Marcos Jr. was born on September 13, 1957. This makes him a Virgo. However, looking into his birth chart would reveal a lot more. On the day that he was born, the sun aligned with the zodiac Virgo and the moon aligned with the zodiac Taurus. The zodiac Sagittarius also rose by the eastern horizon, making it his ascendant or rising sign. How do all of these reflect on him?

A stellium in Virgo

When three or more heavenly bodies get clustered together within a particular zodiac or house in your birth chart, it is called a “stellium.” Such signs greatly influence who you are and reflect your most dominant traits. Marcos Jr. is undoubtedly a Virgo – his stellium is made up of his Sun, Mercury, Mars, and Pluto.

The sun sign represents a person’s outward energy or how they present themselves to others. His sun in Virgo signifies that he is a stickler for excellence, and may even come off as a perfectionist. His sun being in conjunction with Mars makes him naturally driven and competitive. Moreover, he has no trouble aligning his mind and ego, for his sun is in conjunction with Mercury. This makes it easier for him to craft a solid rhetoric.

Such traits clearly manifested in his ability to constitute a massive disinformation network that served as the backbone of his political career. It propelled him into presidency regardless of the controversies surrounding his family.

His knack for communicating with the people might also be attributed to his Mercury placement. In Roman mythology, Mercury was the messenger of the gods. In astrology, Mercury placements give us an idea of how a person articulates themselves through words. He makes an effort to maintain logic and composure throughout every argument because his Virgo is in Mercury. He exhibited this in his first State of the Nation Address.

However, with Mercury in opposition with Lilith and square with Saturn, such efforts to communicate may be blocked due to an intense fear of criticism. This might be the reason behind his constant absence in the presidential debates despite being the frontrunner of the campaign season. He also failed to address crucial issues like human rights and security in his SONA.

Another integral characteristic to look for in an ideal national leader is the intensity of their passion and motivation, which encompasses their Mars placement. People with Mars in Virgo are usually very goal-oriented. Once they’ve set their mind on something, they will do everything to accomplish it.

The current President might benefit from such ambition, considering the state of the Philippines when he assumed the presidency from Duterte. Marcos Jr. has proclaimed big promises of development to the masses ever since he took office, but cultivating them into fruition would require unyielding commitment to service. The caveat of the placement is that, when left unchecked, one could end up taking more than what they could handle. For the sake of the country, let’s hope that won’t be the case for the President.

Finally, the last planet in his Virgo stellium is Pluto. The planet symbolizes transformation and new beginnings – something central to the political interest of the Marcoses. When Marcos Jr. took his oath on June 30, Senator Imee Marcos said that her family was “very, very grateful for a second chance.” It’s no secret either that the former first lady, Imelda Marcos, has long wished for Marcos Jr. to take his place in Malacañang and clear his father’s tainted legacy. The Virgo placement highlights the President’s struggle for perfection. This makes him all the more keen to participate in their quest to transform history.

While the sun shows our outward energy, the moon reflects our inner selves – our emotions and how we act on them when there is no outside pressure. People with their Moon in Taurus tend to be grounded and strong-willed. On the flipside, they can also be quite stubborn. Once their mind is made up, there’s no changing it anymore.

Such determination was brought to the surface during the aftermath of the 2016 vice presidential elections, when Marcos Jr. filed an electoral protest against Leni Robredo, claiming that she stole the vice presidency from him. Even after multiple recounting of votes, it was apparent that Robredo won fair and square, so the Supreme Court unanimously junked his protest. Nevertheless, his camp reprised their narrative of cheating, sowing distrust against Robredo and the entirety of the electoral process prior to their rematch in the 2022 elections.

With his Moon in opposition to Neptune, he also has the tendency to be detached from reality. Throughout his political career, he has repeatedly “whitewashed” the atrocities committed during his father’s reign. He continues to avoid any talks of accountability on their cases of human rights violations and their family’s ill-gotten wealth, calling them “35-year-old issues” that are “already decided.”

One’s rising sign or ascendant shows how others perceive them. If our sun sign and moon sign signifies the things we try to say, our ascendant reveals the things that are heard. Sagittarius risings are characterized by their unrelenting optimism and positivity. They are known for their magnetic charisma, attracting people like moths to a flame.

The charisma of Marcos Jr. is indisputable. After all, 31 million voters united to support his presidential bid in the 2022 elections. Many of these people willfully believe that the dictator’s son is the key towards a better Philippines – the one who will “continue what the father did” and bring back the “golden era” under the old dictatorship. Although the myth of a prosperous Philippines during the old Marcos years has long been debunked by experts, Marcos Jr. was able to capitalize the nostalgia for the past to secure his seat in the Malacañang.

He regularly quells his band of loyalists with populist promises, one of which was the price of rice going down to as low as P20 per kilo. This is an ideal scenario on the surface. Unfortunately, such a plan has been hailed by economists as impossible.

In fact, we are experiencing quite the opposite, with the country’s inflation rate jumping to an all-time high of 6.1%. When this was brought up in the first Cabinet meeting, Marcos Jr. simply shrugged it off. “I think I will have to disagree with that number. We are not that high,” he said. Maybe this denial was a product of his Sagittarius optimism shining through. Finance Secretary Benjamin Diokno, however, clarified that the President just misunderstood the statement.

A stellium in the 9th House

The 9th house explores matters surrounding higher learning and finding one’s life purpose. Peggy Lundquist from The Happy Mystic dubbed it as the “House of Long Journeys,” referring to both lifelong physical and spiritual adventures. Marcos Jr. has a stellium in the 9th house – his sun, Mercury, and Pluto are all clustered together. As we’ve tackled earlier, the sun stands for ego, Mercury signifies communication, and Pluto symbolizes transformation.

If we piece the puzzle together, this could entail that Marcos Jr. had always been destined to play the long game of rewriting his father’s fallen legacy and reinstating his family back into power.

The political machinery that paved the way to his 2022 victory had been in the works for years. Disinformation networks, historical revisionism, elite democracy, and vilification of dissenters – these things are what kept the Marcoses popular in the years following the EDSA I revolution.

Unless we find a way to bring a systemic change that would undermine said institutions, the rise of more people like Marcos Jr. will be inevitable – almost as if it were written in the stars. Good thing is, stars are merely guides. We still have full control over what we choose to do with the past, the present, and the future. – Rappler.com