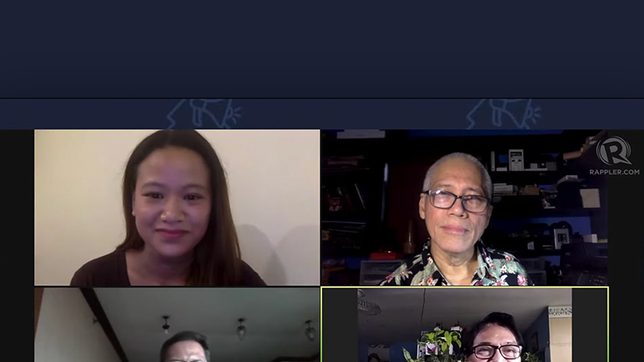 SUSTAINABLE SOLUTIONS. The #CourageON community show tackle the potential impacts of PAREX and sustainable alternatives to the project on October 9.

The solution to Metro Manila’s perennial traffic problem doesn’t necessarily mean having to build another expressway.

In the sixth episode of MovePH’s “CourageON: Tumindig, makialam, kumilos” community show, mobility, heritage, environment, and urban planning advocates pointed out that there are other sustainable alternatives that can help curb traffic instead of San Miguel Corporation’s (SMC) Pasig River Expressway (PAREX).

However, groups, including multi-sectoral coalition #IlogPasiglahin #NoToPAREX Movement, have raised issues on how the project will likely have a negative impact on public mobility, heritage, environment, and public health. The pushback from groups has resulted in a more than 10,000-strong petition calling on concerned agencies and Filipinos to help stop the proposed expressway.

During the #CourageON community show, advocates highlighted how building new roads would not address traffic and offered suggestions on traffic solutions that San Miguel Corporation could fund instead with its P95-billion budget for PAREX.

Urban designer Paulo Alcazaren said that among the root causes of traffic is the lack of a comprehensive mass-based transport system, which also covers public transportation.

“If you go to any other large metropolis over the world, you will assume correctly that they have subways–they have MRTS (Metro Manila Rail Transit System), LRTS (Light Rail Transit System) and they have a network of mass transport systems. We have a few but it’s not enough, and it’s not running in full capacity. So it’s not traffic that needs to be solved, it’s transport–moving people and not cars,” Alcazaren said.

Move as One Coalition member Reycel Bendaña said that building roads would only encourage people to buy more cars, contributing to the looming climate crisis in the country. Although PAREX aimed to cut travel time, this might only serve private car owners as possible toll fees would be expensive for public vehicles.

Alcazaren suggested prioritizing rail-based transit to connect the different cities of Metro Manila. This can be followed by improving shared vehicles such as trains, buses, jeeps, and other non-motorized vehicles. He stressed that private vehicles should be the last priority.

“I lived [for] 12 years in Singapore and I did not own a car. I never needed it. I could get anywhere within 20 minutes by taking the MRT, the bus, or [simply by] walking. Theoretically, we can do the same if we only use land-use plans [for the] entire Metro Manila,” he said.

Move as One Coalition member and former finance undersecretary Sunny Sevilla, meanwhile, suggested improving existing roads by providing bus lanes and extending railway systems. This can cover the same length and area of the proposed PAREX without spending billions and posing threats to the environment and Pasig River, among others.

Green Party of the Philippines spokesperson Reach Penaflor added that San Miguel Corporation could also help in improving the operations of ferry boats along the Pasig River by buying additional boats and building more ferry ports along commercial areas, especially those near MRT and LRT stations. This way, connectivity between public transportation will be more efficient.

With all the recommendations raised, Alcazaren urged government to bring urban planners in when building public infrastructure, so they’d be able to teach stakeholders how to design and build for people.

“We have lost the ability to design for people, everything is for cars. They [government] do not consult the people who can design for them–which are the landscape architects or mostly urban designers. That’s a lot of us who are willing to give their expertise to the design of interconnectivity which is very lacking,“ Alcazaren said in a mix of Filipino and English.

Mobility, environment, and heritage advocates emphasized the need to explore alternative solutions given the possible threats that PAREX would pose, not only to the Pasig River but also to surrounding communities.

If PAREX will ever be constructed, communities residing along Pasig river are at risk of relocation due to the possibility of being sandwiched between PAREX, heritage sites, and other existing buildings, according to Pasig resident Miguel Lopez. Peñaflor added that the overcrowding, and sudden change of water current can cause flooding especially in the areas of Mandaluyong, Makati, Pasig, and Rizal provinces where the river is connected.

As Pasig river is considered to be the biggest cooler in Metro Manila, Youth Strike for Climate Philippines lead convenor Jeff Estela addressed his concern that building concrete on top of it would worsen the extreme heat in the city. This could cause irreversible damage in our climate as it would affect, not only the existing ecosystem in the river, but to the entire ventilation of the city as well.

The #IlogPasiglahin #NoToPAREX Movement had also said in its petition that cars travelling above the Pasig River would increase non-exhaust emissions like microplastics from car tires, road dust, and particulate matter that would populate our waterways.

What can Filipinos do

PAREX, however, isn’t set in stone. Advocates believe there is still a chance to stop the construction of PAREX, even though it already broke ground.

Bendaña encouraged people to talk to their barangay officials and other Filipinos about the issue so they may also make noise and help urge government offices and local governments to address communities’ concerns with PAREX.

(Talk to your barangay officials. I believe that even though many are silent today on the issue, many barangay officials are opposed to PAREX, but remain hesitant to make a stance because they do not have citizen support from the residents of Pasig. In order for us to motivate our government officials in our barangays to speak out against the project, we need to join them.)

Pasig resident Miguel Lopez urged people to fight back and demand an extended period of public consultations to allow transparency, accountability in affected communities. Sevilla also supported this by encouraging people to write a letter addressing Department of Environment and Natural Resources (DENR) to request for a proper public hearing, especially as the PAREX has yet to get an environmental compliance certificate signed by the department.

While the conglomerate had already held a public consultation where concerns on pollution post-construction were raised by stakeholders, it had only responded to these concerns with “noted” or the insistence that Filipinos would benefit from the project economically.

As PAREX is expected to be constructed in early 2022, advocates emphasized how immediate action should be taken to prevent harmful impacts of the expressway, which can affect communities beyond Pasig City.

“PAREX will affect all Filipinos in the near future because this project is really dangerous and it will put the future of the next generations at risk. So let’s make sure that the framing of the PAREX issue is not just because they are from Pasig or from NCR, but an issue that will massacre the Pasig river as an environmental living thing, and at the same time the cradle of the Filipino civilization,” Estela said in a mix of Filipino and English.

The sixth episode of the #CourageON community show was organized by Rappler’s civic engagement arm MovePH in partnership with Friedrich Naumann Foundation for Freedom. It was also co-organized by AltMobility PH and #IlogPasiglahin #NoToPAREX Movement; and co-presented by Living Laudato Si Philippines and Oecono Media – Rappler.com

#CourageON: We see trolls. Now what?