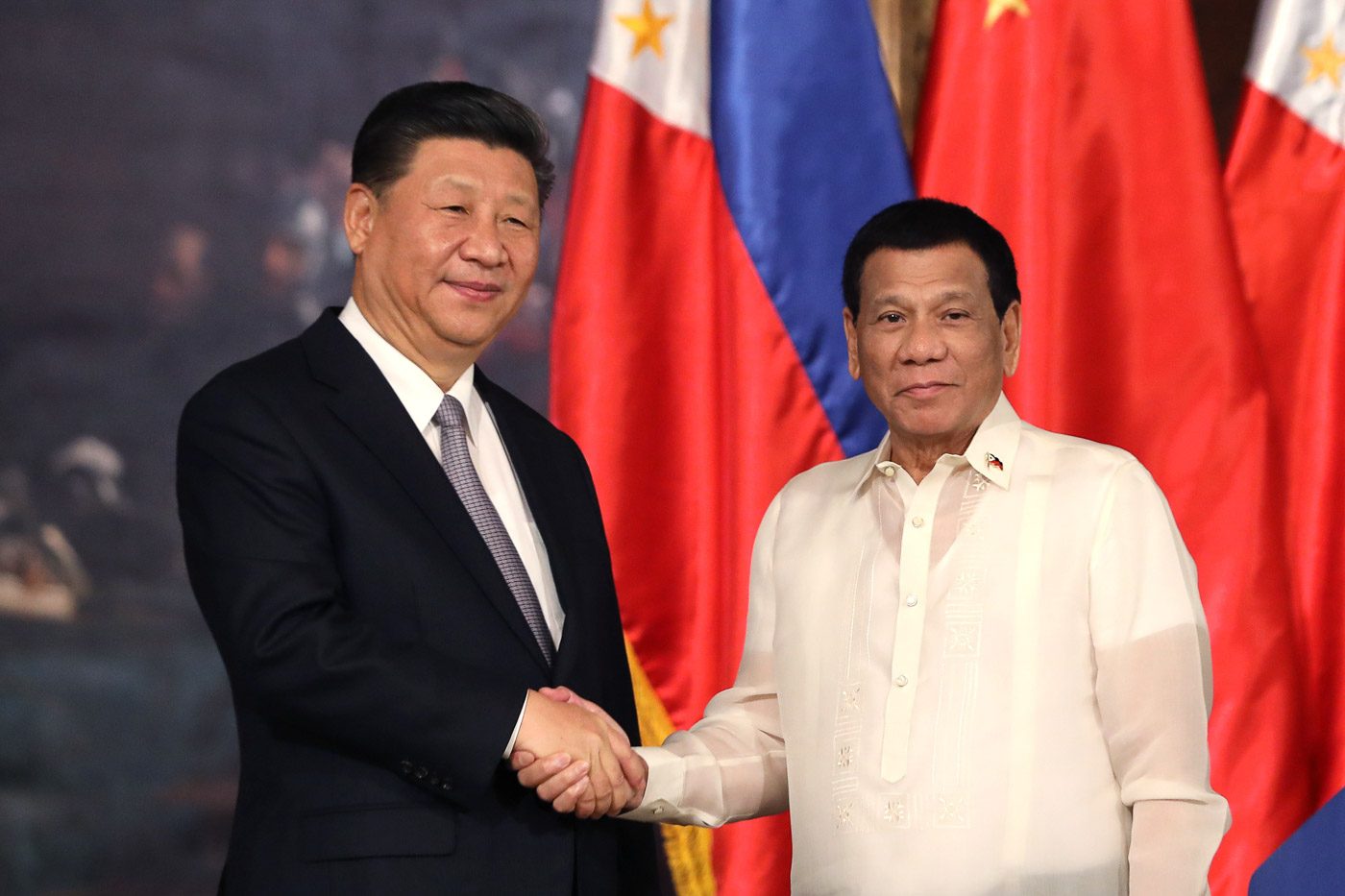 'FRIEND.' This file photo was taken in November 2018, during President Xi Jinping's visit to Manila.

Facebook Twitter Copy URL
Copied
The two leaders ‘stressed the need to exert all efforts to maintain peace, security, and stability in the South China  Sea’ where the Philippines has recorded numerous Chinese incursions in Philippine waters

MANILA, Philippines – President Rodrigo Duterte and Chinese President Xi Jinping held an hour-long telephone summit where they discussed the South China Sea issue and the situation in Ukraine, and reviewed the bilateral relations between their countries during the Duterte administration, Malacañang said on Saturday, April 9.

“The leaders stressed the need to exert all efforts to maintain peace, security, and stability in the South China  Sea  by exercising restraint, dissipating tensions, and working on a mutually agreeable framework for functional cooperation,” Malacañang said in a statement.

“Both leaders acknowledged that even while disputes existed, both sides remained committed to broaden the space for positive engagements which reflected the dynamic and multidimensional relations of the Philippines and China,” it added.

Malacañang said the leaders described “the trajectory of relations as one that is positive and created greater space for partnership and cooperation.” This, despite continued tensions in the West Philippine Sea caused by unabated Chinese incursions that prompted the Philippines to file hundreds of diplomatic protests against China, including one just over a week prior to the telesummit.

The Department of Foreign Affairs summoned Chinese Ambassador to the Philippines Huang Xilian in March after a Chinese navy vessel intruded, and later lingered, in the Sulu Sea earlier in 2022.

In 2021, retired Supreme Court senior associate justice Antonio Carpio said that China had “killed” the code of conduct through its China Coast Guard law, which allows its Coast Guard to use armed force against anyone found in Beijing-claimed waters.

Amid criticism over his lacking response to China’s aggression in the West Philippine Sea, Duterte raised the Philippines’ legal victory against China in the 2020 United Nations General Assembly.

During their telesummit, the two leaders also discussed the war in Ukraine.

“President Duterte and President Xi expressed deep concern over developments in other parts of the world, including in Ukraine. The two Presidents renewed the call for a peaceful  resolution of the situation through dialogue in  accordance  with international law,” Malacañang said.

China has refused to condemn Russia’s invasion of Ukraine and has been warned against helping its ally evade global sanctions. China was among the 24 countries that voted against the United Nations resolution suspending Russia from the UN Human Rights Council over reports of “gross and systematic violations and abuses of human rights” in Ukraine.

Duterte had earlier called for an end to what he called a “stupid war,” noting its impact on Philippine fuel prices and basic commodities.

They also agreed to work closely together to address the impacts of climate change and “to ensure that the voice of the developing world will be heard in all relevant climate change fora.”

On climate change, Malacañang said that Duterte and  Xi  “also agreed on the need for both  the Philippines  and  China  to  work  closely  together  to  address  the  impacts  of  climate change  and to ensure that the voice of the  developing world will be heard in all relevant climate change fora.”

Industrial superpower China is one of the world’s top contributors of CO2 emissions. Duterte had earlier demanded for climate justice from developed countries, which are “most responsible for this existential challenge.”

In reviewing Philippines-China relations since the start of the Duterte presidency in 2016, the two leaders agreed on the “significant growth” of their countries’ economic and infrastructure cooperation.

“Presidents Duterte  and  Xi  agreed  to  further  enhance  two-way  trade  and investments, and continue supporting the Build, Build, Build program. The leaders also stressed the need to open up access to goods and services and work for a balance of trade that would reflect a healthy state of economic partnership,” Malacañang said.

The leaders also agreed on the importance of mutual support in each other’s pandemic responses, such as through making vaccines available to nations that most needed them.

Most of the Philippines’ purchased COVID-19 vaccines are China-owned Sinovac’s CoronaVac. The Philippine Department of Health also said on April 5 that it would donate “excess” vaccine doses to Myanmar and Papua New Guinea.

Malacañang said Xi and Duterte, whose term ends on June 30, 2022, “considered the elevation of Philippines-China  bilateral relations into a Comprehensive Strategic Cooperation as a milestone achievement that demonstrated the commitment of the Philippines and China to continue building on the gains of the previous years towards the future.” – Michelle Abad/Rappler.com