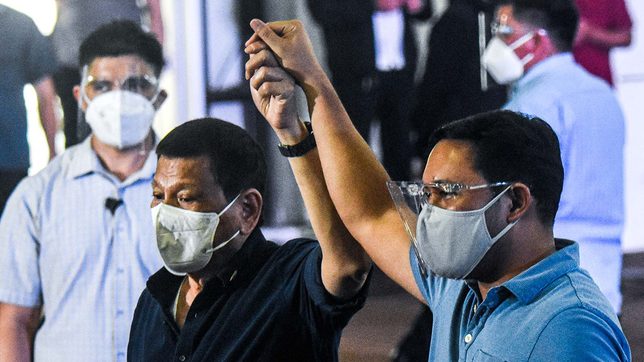 COC FILING. President Rodrigo Duterte raises the hand of DPWH Secretary Mark Villar as PDP-Laban'S (Cusi wing) candidate for the Senate in the May 2022 elections, during the filing of certificate of candidacy at the Sofitel hotel in Pasay City on October 8, 2021.

The Commission on Elections (Comelec) pushed back on criticisms that it gave preferential treatment to a faction of ruling party PDP-Laban when its senatorial aspirants filed their certificates of candidacy (COC) on Friday, October 8.

“What happened earlier was that we did have companions for the candidates who are filing for the Senate, but they were removed from the premises and in the end, it was only the President who was left together with SAP Go to stand with the candidates for senator,” Comelec spokesman James Jimenez said in an end-of-day briefing.

“Under the rules, each candidate for senator is allowed two companions, but in the end, the only companions they had were President Rodrigo Duterte and Sen. Bong Go,” Jimenez added.

Comelec guidelines for this year’s COC filing state that an aspirant for president, vice president, and senator, can bring with them a maximum of three people to the venue.

The poll body also downplayed the holding of hands that took place.
“As to their holding of hands, while they did maintain some social distance, it has been the practice to raise hands of candidates. That was a momentary thing,” Jimenez said.

Senator Nancy Binay, prior to the Comelec briefing, slammed the Comelec for supposedly giving the PDP-Laban Cusi wing special treatment during the filing of COCs.

“This is very unfair. We followed your rules in Sofitel tent, then you accommodated the candidates of PDP and broke your own rules?” Binay tweeted.

The Comelec, reacting to Binay’s tweet, said the presence of President Duterte’s security details may have led to the impression that special accommodations were made for the chief executive’s ruling party.

“Of course, we did have the Presidential Security Group here. But the President is entitled to a security detail, so allowances will have to be made for that,” Jimenez said.

Before Duterte’s arrival, more security forces were deployed to the venue, and K9 units were brought to inspect the area.

The Comelec enforced strict protocols in this year’s COC filing, unlike in elections past, in a massive bid to reduce the risks of COVID-19 spread.

The Comelec changed the venue from its main office in Intramuros to a bigger place in Sofitel, deployed COVID-19 marshals, and required attendees to present a negative antigen COVID-19 test result every day.

The COC filing ran from October 1 to 8. – Rappler.com