VP candidate Sara Duterte meets with members of the House, including House Speaker Velasco and Majority Leader Romualdez on December 15.

Facebook Twitter Copy URL
Copied
(1st UPDATE) President Duterte's party, however, does not announce a presidential bet for 2022 just yet 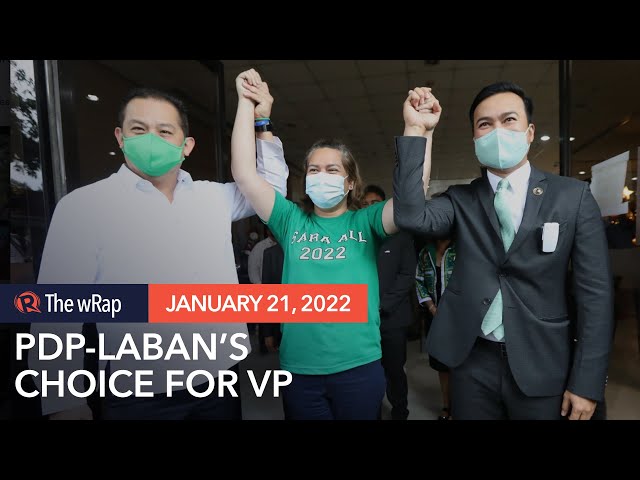 MANILA, Philippines – After more than a month of having no bets for the highest posts in the land, PDP-Laban, President Rodrigo Duterte’s party, said it would be endorsing his daughter, Davao Mayor Sara Duterte, as vice president in 2022.

“The decision to adopt Mayor Sara has been made by the PDP Laban National Executive Committee based on her credentials, advocacies and vision for our Nation,” the party said in a statement. 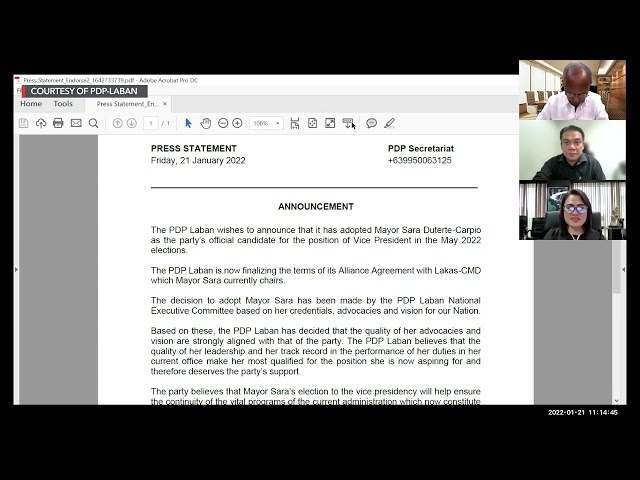 Cusi said PDP-Laban is also in the process of finalizing an alliance with Lakas-CMD, which Sara co-chairs. The ruling party had earlier rejected an offer to forge an alliance with the coalition backing the Marcos-Duterte tandem.

The younger Duterte joined Lakas-CMD in November 2021, days after she withdrew her mayoral reelection bid and prior to making official her bid for the vice presidency. Sara and Lakas would eventually announce a four-party “UniTeam” alliance which made formal the Marcos-Duterte ticket for 2022. Both political scions are leaders in the latest voters’ preference surveys.

Sara is the eldest daughter of the incumbent president and had been widely seen as his political successor and 2022 presidential candidate. Even before she was endorsed by PDP-Laban, which her father chairs, Sara had been running on the promise of “continuing change,” a reference to her father’s 2016 campaign promise.

While the PD-Laban endorsement makes sense at first glance, it’s important to note that Sara herself was not exactly warm towards her father’s party. She has repeatedly thumbed down talks that she would join the party and has actively tried to exclude herself from any of PDP-Laban’s narratives.

Cusi, in turn, referred to Sara as a someone who is already familiar with the party’s values. Asked if the pending PDP-Laban and Lakas-CMD alliance means they’ve been speaking to Sara herself, Cusi declined to answer but said there had been “consultations” about it.

Why no presidential bet?

Cusi said they have yet to pick a presidential candidate because they are “in the process of evaluating who among the candidates would best continue the programs this administration has started.”

Most of the leading presidential candidates in the 2022 elections include names who’ve crossed hairs with party chair Duterte himself or the party. There’s Marcos, whom Duterte had called a “weak” leader; opposition head and critic Vice President Leni Robredo, who left Duterte’s Cabinet after being told to stop attending Cabinet meetings; and one-time PDP-Laban party mate Senator Manny Pacquiao, who now leads his own faction of the party.

Senator Ping Lacson, once called an “enabler” of the President, has since said the country has had “enough” of Duterte. Manila Mayor Isko Moreno, who once engaged in a word war with the President, had recently expressed openness to a Duterte endorsement.

Cusi, who is also Duterte’s energy chief, declined to name who they were considering in the selection process and said they were not in talks with either Marcos or Pacquiao just yet. He also added that PDP-Laban might end up endorsing no presidential candidate at all.

“It’s always a factor,” said Cusi, when asked if Duterte’s personal sentiments towards a candidate would be a factor in the party’s selection process. Duterte once defended PDP-Laban’s earlier rejection of a Lakas-CMD alliance, which had presupposed support for Marcos as well.

In a statement, Lakas-CMD thanked PDP-Laban for adopting Sara as their vice presidential bet. “We welcome this development as an opportunity to renew our partnership with PDP-Laban, which has been a steady ally in pushing for social and economic reforms under the Duterte administration,” the party said.

The party, co-chaired by Senator Bong Revilla and Sara Duterte, also made explicit their position as the administration-allied party in 2022.

“The Lakas-CMD is always open to alliances and partnerships with other parties and political groups which share our ideals and vision for the common good of the country.  We hope that our efforts to forge unity with all parties supportive of President Rodrigo Roa Duterte would help realize our common dream of electing the team that would best serve the Filipino people,” the party said.

In a separate statement, Marcos spokesman Vic Rodriguez said they “respect” the PDP-Laban endorsement, while emphasizing that no alliance had been signed between PDP-Laban and Lakas-CMD to formalize the Davao mayor’s “adoption” as vice presidential bet.

The alliance, said Cusi, was still being worked on because of possible conflict at the local level. Because the deal had not existed before the deadline of filing of candidates, some provinces, cities, and towns could see Lakas-CMD and PDP-Laban candidates running against each other.