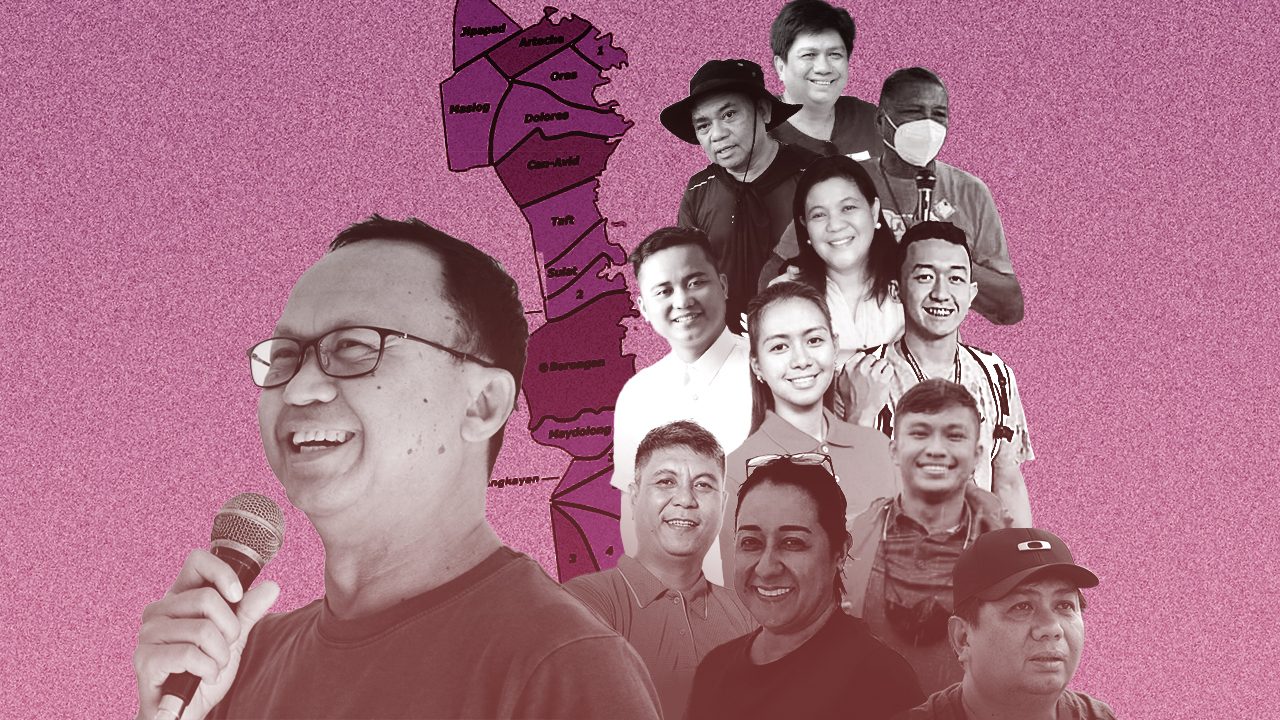 ALL IN THE FAMILY. Since Eastern Samar Governor Ben Evardone won his first electoral post in 2004, kin have gobbled up positions across the province.

Eastern Samar Governor Ben Evardone’s endorsement of Vice President Leni Robredo in the 2022 presidential race follows the former student activist’s record of shifting political allegiances since 2004, the first time he won an electoral post in one of the country’s poorest provinces.

But for the first time in a political career spanning almost four decades, Evardone’s switch is happening during, and not after, an electoral campaign, mainly due to President Rodrigo Duterte’s failure to designate a clear heir.

The term “political butterfly” fails to capture Evardone’s zest in serving political patrons while clawing his way out of impoverished roots to become patriarch of Eastern Samar’s dominant political dynasty.

Evardone, currently vice president for the Visayas of Duterte’s Partido Demokratiko Pilipino-Lakas ng Bayan, ruled as governor from 2004 to 2010, then as congressman of the province’s lone district from 2010 to 2019, before returning to his original post.

The native of Sulat town worked as a waiter, a student leader and editor at the University of the East, and reporter for Malaya before completing his business degree in 1986.

While covering the Commission on Elections in the last years of the Marcos dictatorship, Evardone played a cat-and-mouse game with law enforcers as a target of a preventive detention action (PDA), which at the time, allowed arrests and detention for not more than a year.

After Marcos’ ouster in the 1986 EDSA People Power, he entered public service as assistant secretary of the Department of Public Works and Highways and assistant executive secretary in  President Corazon Aquino’s government.

When he defeated incumbent governor Clotilde Japson-Salazar in 2004 to become the youngest governor of Eastern Samar, Evardone ran under the opposition Koalisyon ng Nagkakaisang Pilipino (KNP), which included the party of deposed president Joseph Estrada.

That was the last time he identified as opposition. As he flipped and flopped among the country’s rulers over the next 37 years, his relatives gobbled up positions in Eastern Samar.

Philippine Statistics Authority (PSA) data shows poverty incidence in Eastern Samar dropping from 43% in 2018 to 35% in 2021, but it remained among the top 20 poorest provinces in the country last year.

Not a political dynasty?

It was Ben’s older brother, Felipe, also a former newsman, who first got elected to public office in 1988 as mayor of their hometown Sulat. He survived a 1990 recall election challenge when the Supreme Court declared it moot and academic in 1991.

There are currently several Evardones in top local positions.

The older Roland, Ben’s second cousin, relocated from Sulat when he became public health dentist of Arteche. He ended the 15-year rule of the Pinangay political family in 2007.

Zacate contested the gubernatorial post in 2013 but lost to incumbent Governor Conrado Nicart Jr., who succeeded Ben in 2010.

Virginia, Javier’s wife, took over the top Sulat post in 2013 until Javier came back in 2016. She is a reelectionist provincial board member.

Bowad disagrees that the Evardones are a dynasty, noting that he is Ben’s “distant relative.”

“It’s just that there are people supporting him, us, because they can see that everything Governor Ben is doing is for Eastern Samar,” he told Rappler in a mix of Waray and English.

Rappler defines a political family as “a set of at least two politicians who are related to each other up to the 3rd degree of consanguinity (by blood) or affinity (by marriage) serving at the same time in a 3-year term, usually in one locality.”

“Families who have served across several terms, even in various localities,” are called political dynasties. The Evardones are a “fat” dynasty with members simultaneously holding elective posts.

Grata filed a graft complaint against Evardone in 2018 over his approval of a P5.37-million cash advance for barangay officials attending a seminar in Baguio City, an act from a decade before. The Ombudsman dismissed the complaint for lack of merit in February 2022.

Ben’s wife, Grace, was An Waray’s second nominee but the party won only one seat.

After winning in 2004, Evardone joined President Gloria Macapagal-Arroyo’s Kabalikat ng Mamamayang Pilipino (Kampi). He was elected secretary-general, whip-cracker, of the League of Provinces of the Philippines (LPP) in 2007 during his second term. Arroyo also made him Local Government Adviser for Public Affairs that year.

Ben served as the media director of Macapagal-Arroyo’s Team Unity in the 2007 midterm elections.

His campaign post was made a reason for his brother Felipe’s leave as director of the National Printing Office in March of 2007, amid two graft complaints. The Ombudsman cleared Felipe in 2021.

The governor gained notoriety a few months after the 2007 polls when he admitted being the source of bags stuffed with P500,000 each that were handed out in Malacanang to first-time governors.

A month after the 2010 elections, the Macapagal-Arroyo favorite started his road to “stalwart” status in the late President Benigno Aquino III’s Liberal Party majority. Congress ended what the Philippine Center for Investigative Journalism called his years of “flying below the radar.”

He was among the lawmakers who impeached Chief Justice Renato Corona and Arroyo Ombudsman Merceditas Gutierrez. Then he vigorously defended Aquino against impeachment attempts, and spoke up for the Priority Development Assistance Fund (PDAF) or legislators’ pork barrel, and the Disbursement Acceleration Program or DAP.

The Supreme Court in November 2013 unanimously declared the PDAF illegal. In July 2014, it also declared unconstitutional three key aspects of the DAP. But in 2015, the High Court reversed its ruling on the use of savings to augment projects in the approved budget.

Those who knew Ben as a journalist slammed his “betrayal” of the freedom of information bill as chair of the House committee on public information.

“Evardone…simply delayed and canceled committee hearings on the bill on and on,” the Right to Know, Right Now coalition said in 2013.

Ben served as spokesman of Team PNoy in the 2013 mid-term elections, and he campaigned hard for the LP in 2016. But a few days after Duterte’s victory, Evardone was among the first legislators to jump ship.

Within two weeks of endorsing Robredo, Evardone’s clout was clear. From only eight mayors backing Robredo in February, 20 of the Eastern Samar’s local chief executives publicly came out for the Vice President on March 29, when she held a grand rally in Borongan, the provincial capital.

Evardone did not reply to Rappler’s repeated questions over shifting political allegiances.

Unlike former speaker Pantaleon Alvarez, who had to apologize to Robredo for his attacks against her when he was a Duterte ally, Evardone did not add to the torrent of abuse against the Vice President during the last six years.

Robredo had Evardone by her side as she barnstormed Samar island and Leyte province on March 28 and 29. She promised to prioritize the development of Eastern Visayas’ poor provinces should she win as president, including completion of the circumferential road connecting Las Navas in Northern Samar, Matuguinao in Samar, and Jipapad in Eastern Samar, and ensuring better telecommunications and power services. 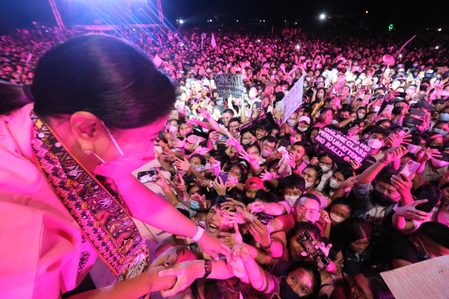 Evardone claimed in 2013 to have helped fund more than 67 kilometers of concreting and asphalting projects.

The Eastern Samar engineering office reported in August 2021 that infrastructure projects from 2016 to 2021 generated over 19,000 jobs. Projects like the Maypangdan Flood Control Project in Borongan City continued during the pandemic.

Other big-ticket projects started in 2020 were: the P100-million first phase of the Borongan Bypass Road, the P75-million Maydolong-Basey road, off-carriageway improvement to national roads worth P163 million, and P38 million worth of improvements for tertiary roads.

The province has a relatively good health scorecard, with its percentage of the 2020 budget allocated for health higher than the national 2022 target at 21.84% but lower than the previous year’s 25.18%.

In 2019, sectors like persons with disabilities (PWDs) got provincial council seats.

“For the first time, we were able to have a voice,” Hendrick Dacuyan, a former police officer forced to retire due to a permanent physical disability, told Rappler. “We are included in all of the plans of the provincial government. They listen to us.”

From P500,000 in 2018, the annual budget for the PWD sector in Eastern Samar increased to P2 million in 2019, with P1.5 million added every year since, hitting P9 million in 2022 to provide assistive devices like wheelchairs, white canes, and hearing aids, and the construction of their office in the provincial capitol. – Rappler.com