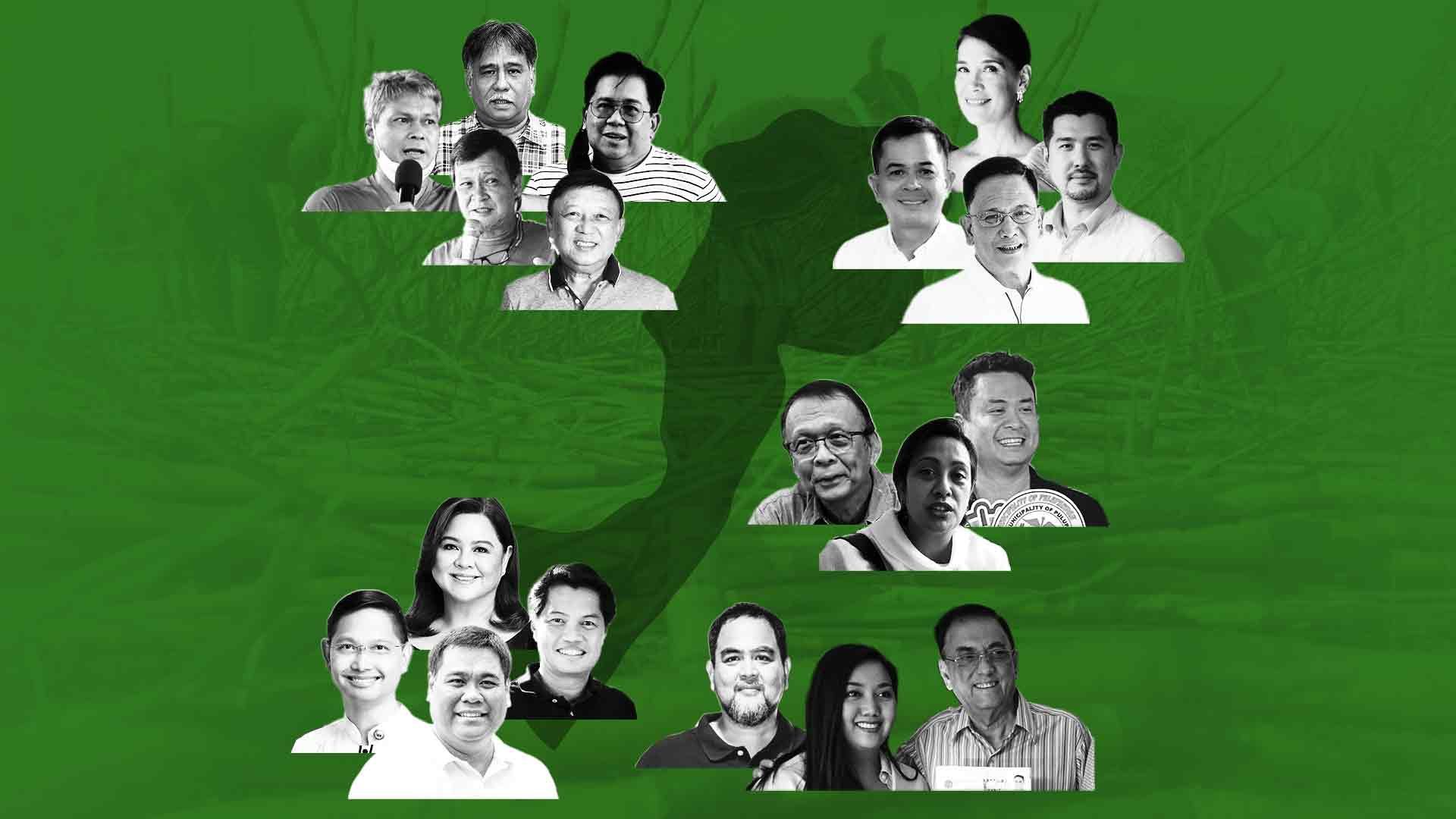 BIG GUNS. Negros Occidental's most powerful political dynasties have ruled for decades and, in some cases, for a century.

BACOLOD CITY, Philippines – A coalition since 2019 between the two biggest political blocs in Negros Occidental gifts most political dynasties with an election-free pass or a way of skirting strong opponents.

While he has no sibling in politics, the governor is a cousin of Patrick Lacson, a “Kakampink” (supporter or ally of Robredo) in the council slate of pro-Marcos Bacolod mayoralty bet Albee Benitez. 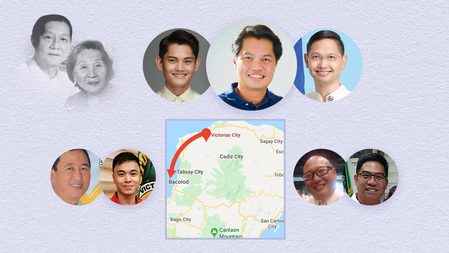 Patrick is the son of former governor Daniel “Bitay” Lacson. His first cousin Andrew Montelibano, is a reelectionist 3rd District board member. The late EB Magalona mayor, David Lacson, who died of COVID-19 last year, was also his first cousin.

His wife, Juliet, the reelectionist 2nd District representative, is the granddaughter of Marcos crony Roberto Benedicto.

Juliet took over the mayor’s post from 2010 to 2016 when Jeffrey served in Congress. She is running unopposed in the 2022 polls.

Majority of the province’s mayors are backing the dictator’s son and namesake in the 2022 presidential elections.

Representative “Marilou” Arroyo of the 5th District is the sister-in-law of former president Gloria Macapagal-Arroyo, who was instrumental in getting Davao City Mayor Sara Duterte to be Marcos’ running mate.

The former president, who also served as House speaker, personally called officials to attend the February show of force for Marcos.

But Ferrer told Rappler, wryly, that some mayors and legislators can’t get their own families to back Marcos.

Many Bacolodnon Kakampinks have grudgingly agreed to see past Benitez’s Marcos endorsement because his wife, Nikki, is a known supporter of Robredo.

The PDP-Laban reelectionist is the son of former vice mayor Nilo L. Lizares Jr. and the cousin of former mayor Anthony Lizares.

The Marañon-Cueva clan from the province’s northern 2nd District are also Kakampinks.

Their political dynasty stretches back to 1964, when the late Alfredo Marañon Jr. won a council seat in Sagay City. He served as councilor, vice mayor, mayor, assemblyman in the Marcos-era Batasang Pambansa, and later completed three terms as 2nd District representative.

His younger brother, Joseph, was also mayor of Sagay City from 1992 until 2001, when he became governor until his death in 2008.

Thirdy’s successor, Vice Mayor Narciso Lachica Javelosa, likewise unopposed, was present during a show of force for Marcos in February. He is the uncle of the late Sagay vice mayor Kent Marañon III Javelosa, Thirdy’s cousin and the son of a former mayor.

But at least two sugar planters in the district independently told Rappler that Manolet is “a very soft supporter” who has told barangay captains they are free to choose their presidential bets.

Also on the Kakampink side is reelectionist 2nd District provincial board member, Sixto Jr. Villena Guanzon. His sister, retired judge Frances, is running for a Cadiz council seat.

Both are siblings of former Comelec Commissioner Rowena Guanzon, who plays such a high profile in the Robredo campaign that she has had to post, “I am not a candidate.”

Pedro was present in the Marcos gathering. His nephew Miguel Montinola Zayco, reelectionist board member, is campaigning for Manila Mayor Isko Moreno.

They are sons of the late Nehemias G. de la Cruz Sr., a New People’s Army rebel-turned-politician, who served a total of 13 years as mayor of the mountain resort town.

Family matriarch Cynthia also served three straight terms as mayor. The clan has held power for all but three years in three decades.

Hinigaran Mayor Nadie Arceo is running for reelection with his wife, Mary Grace, as running mate.

Some of the province’s dynasties – Gatuslao, Montilla, Zayco – had ancestors lording it over the local populace in the Spanish and American colonial eras.

The Alonso siblings are also Marcos supporters, as are their Alvarez kin, who are all running unopposed in Ilog town.

The Alverez family is part of the huge, turbulent Montilla clan.

Alvarez patriarch Genaro Jr., popularly called Lim-ao, served as congressional 6th District representative from 1995 to 2004 and from 2007 to 2010.

He won as vice governor in 2010, sending his daughter Mercedes to Congress.

When Mercedes ended her three terms in 2019, the patriarch returned to Congress for one term.

Mercedes will now return to her old seat. Lim-ao is the running mate of reelectionist Mayor John Paul, his son.

Another sibling, Genaro Alvarez III, has also served as mayor and vice mayor.

There has been radio silence since the pandemic from the most controversial Montilla personality, Magdaleno “Magsy” Peña, former mayor of Pulupandan and Moises Padilla towns. But he still casts his shadow over the political landscape.

Magsy started his political career as mayor of Pulupandan in 2007.

He was then known as a warlord whose command of state forces and stranglehold on the legal system forced Negros Island Army commander, Brigadier General Raymundo Jarque – trapped in a feud between Magsy and his brother, Bonifacio – to seek protection from the New People’s Army in 1995.

It took 12 years before the Supreme Court and the Sandiganbayan junked the graft and qualified theft cases Magsy filed against his cousin, former mayor Antonio Esteban Suatengco, and Jarque himself. The general faced additional attempted murder charges, which the High Court also dismissed.

In 2013, operatives of the Criminal Investigation and Detection Group (CIDG) and Special Action Force members raided the Peña ancestral house, seizing the equivalent of a small town’s arsenal: 89 assorted high-powered firearms, explosives, and thousands of ammunition.

By that time, Magsy’s son and successor, Miguel Antonio, was running unopposed for his father’s old post.

Magsy had set his sights on Moises Padilla, a perennial hot spot on the province’s eastern border with Negros Oriental. He won as mayor in 2016, his running mate a niece, Ella Garcia-Yulo.

Within a year, Garcia-Yulo faced illegal possession of firearms and explosives charges after cops at a checkpoint forced their way into her vehicle. 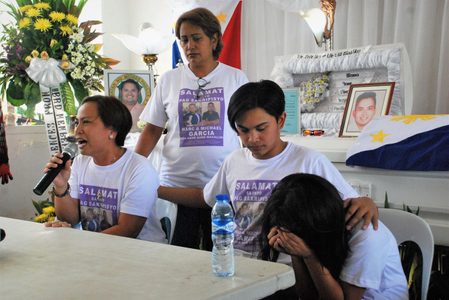 Garcia-Yulo was charged for the murder of councilor Jolomar Hilario, but was acquitted since she was behind bars when the killing occurred.

Her co-accused, including councilors Jose Morito Flores, Jimmy Don Plaza, and Vincent Garcia (Michael’s brother and Ella’s nephew), and Vice Mayor Ian Villaflor took leave from work and stayed away even after Garcia-Yulo’s landslide 2019 win against Magsy. They surrendered in 2021, only when reports swirled about their nemesis suffering a debilitating illness.

Garcia-Yulo and relatives, who have experienced firsthand living under tyranny, still back Marcos.

With Magsy’s absence, rapport was forged between Suatengco, the former mayor, and incumbent third-termer Mayor Miguel Antonio Peña, who slid down to vice mayor.

Antonio Suatengco died in February, however. His son Lorenzo has filed as a substitute candidate.

Two mayoralty bets in the 5th District city of Himamaylan are Marcos supporters.

Tinto told Rappler in March that he has fond memories tagging along with his grandfather, former mayor and legislator Agustin Gatuslao, during visits to Malacañang.

Tongson, in 2019, defeated then-vice mayor Carmenia “Mencit” Gatuslao Bascon, who was running to replace her son, Tinto, who was then the outgoing mayor.

Across five generations, the Gatuslaos have placed in office two governors, five mayors, and four legislators.

Family members have a record of facing off during elections. Tinto defeated his mother’s brother, Antonio “TonyGat,” in the 2010 mayoralty race.

TonyGat ran as an independent for the Batasang Pambansa in 1983 against his cousin, Bob Gatuslao, of the Marcos Kilusang Bagong Lipunan.