MANILA, Philippines – Aspiring president Senator Manny Pacquiao said that he was against abortion and instead would support a program that would provide counseling to rape victims.

In the presidential interviews by talk show host Boy Abunda, Pacquiao was asked if he supported abortion on instances where victims were raped.

(I am against abortion, Boy. It’s not the child’s fault that the mother was impregnated and then later he was born. It’s better to have the victims go through counseling, that it’s not the end of everything. That there is hope to change things.)

The boxer icon-turned-politician added that allowing abortion would not turn back time.

“Kung ibabalik lang natin, di mape-prevent na ma-rape ka. (If we will allow abortion, it would not prevent you from being raped),” said Pacquiao.

Abunda pressed Pacquiao. What about rape within a family? The senator stuck to his answer that counseling will help change the perspective of a raped woman to keep the baby.

“‘Yung bata nabuo ‘yan dahil may part ka. (The child was formed because you have a part there),” said Pacquiao.

Abunda asked: Even if it is rape? Pacquiao answered, “May part ka rin diyan sa bata na nabuo. ‘Di naman mabuo ‘yan kung sa lalaki lang.” (You have a part to play for the child to be formed. It would not be formed if it were only the man.)

As Abunda reiterated that being raped is being forced, Pacquiao clarified his answer.

“Ibig ko sabihin, ‘pag nasugatan tayo, naghihilom ‘yan. Gumagaling. (What I mean to say is that if we get wounded, it will still close. We will still be healed),” he said.

Complication from unsafe abortion is among the five leading causes of maternal death and a leading cause of hospitalization in the Philippines.

Advocates have long pushed for the decriminalization of abortion, to stop women from seeking underground services. The Philippines penalizes those who seek access to abortion services and those who assist them with imprisonment. 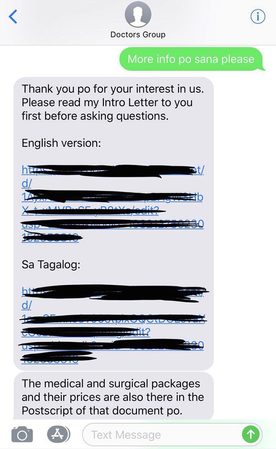 Aside from Pacquiao, other candidates Vice President Leni Robredo and Manila Mayor Isko Moreno do not want to allow abortion in the Philippines. Robredo, however, is open to decriminalizing abortion.