Facebook Twitter Copy URL
Copied
Campaign organizers hide the statue of democracy icon Ninoy Aquino to show 'the past is over' and support Ferdinand Marcos Jr. How will Tarlac vote on May 9?

TARLAC, Philippines – As Tarlac City Mayor Cristy Angeles began to introduce her bet in the May 9 presidential race, Ferdinand “Bongbong” Marcos Jr., someone on stage screamed, “no more yellows!” – the color associated with the slain democracy icon Benigno “Ninoy” Aquino Jr and the liberal administrations held by his widow and son.

The Aquinos are not only from this province; this has been their political base for decades. But on Saturday, April 2, organizers of the campaign sortie of Marcos showed that this was no longer the case, hiding Ninoy Aquino’s statue at the plaza where Marcos spoke. 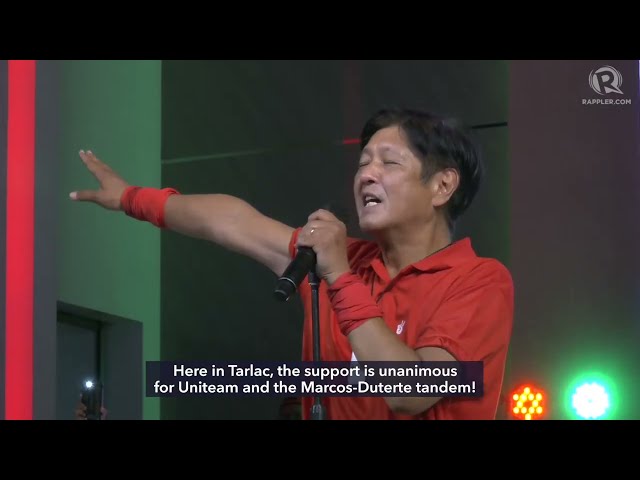 Angeles is one of 14 mayors in Tarlac province who belong to the Nationalist Peoples’ Coalition (NPC) and are endorsing Marcos, based on the count of Tarlac Governor Susan Yap, also of NPC, who on Saturday declared their support for Marcos’ Uniteam. The province has 17 towns and one city.

“Of course, [we’re supporting] the UniTeam. Three of our NPC members are with the UniTeam,” said Yap, referring to senatorial bets Sherwin Gatchalian, Herbert Bautista, and Loren Legarda.

It was Corazon Aquino’s estranged cousin and Marcos crony, the late Eduardo “Danding” Cojuangco Jr., who founded the NPC that considers Tarlac as its bailiwick as well.

Supporters of presidential candidate Vice President Leni Robredo had tried to block Marcos’ Tarlac rally, saying he was not welcome in the province. “Tarlaqueños with a sense of history and a firm belief in truth and justice, wish to strongly oppose the visit of Ferdinand Marcos Jr. to our beloved province on April 2, 2022,” said the Robredo Peoples’ Council in Tarlac.

But unlike Antique, where the Marcos rally was canceled because of public furor that it was going be held at a plaza named after an EDSA hero, Evelio Javier, the Tarlac rally pushed through.

Rally organizers even removed Ninoy Aquino from sight by putting a tent right across from the face of his towering statue and using posters to cover his body – so that no part of the statue was seen from the stage where Marcos spoke. To a segment of Tarlaqueños, this was disrespect to both the memory of Ninoy, and what his 1983 assassination meant for the Philippines.

Governor Yap said “it shouldn’t have been done that way, we respect naman,” adding she hasn’t talked to Angeles about it.

But the city mayor shrugged off criticisms and said: “Pabayaan na natin ang mga bumabatikos (Let’s set aside the criticisms), it’s time for forgiveness and healing.”

A staunch opponent of Marcos, Ninoy Aquino was murdered on the tarmac of the Manila airport upon his return to the Philippines on August 21, 1983, sparking mass protests that culminated three years later in the 1986 EDSA People Power Revolution that ousted Marcos and catapulted Aquino’s widow, Corazon Aquino, to the presidency. Their only son Benigno Aquino III was also elected president in 2010.

Ninoy Aquino’s murder remains unsolved, and the Supreme Court noted how Marcos “misused the overwhelming resources of the government and his authoritarian powers to corrupt and make a mockery of the judicial process in the Aquino-Galman murder cases.”

But the Marcoses have since bounced back from EDSA through a stream of propaganda and disinformation that aimed to bury Marcos’ abuses and picture his corrupt regime as the Philippines’ golden era.

For Tarlac native Gilbert Teodoro, who is running for senator under Marcos’ slate, what’s happening in his province is not historical revisionism. Teodoro is a nephew of Danding Cojuangco and Cory Aquino.

“You ask the people whether that’s historical revisionism or not. After EDSA, there was revisionism. So now the people are just doing what they feel will bring back their lives, will bring the Philippines forward, and not history and not turning accusations left and right,” Teodoro said after their grand rally in Paniqui town.

In reality, the NPC indeed holds sway in Aquino country.

Mayor Angeles is with the NPC, and is running unopposed in May. When Kris Aquino alluded to someone without “utang na loob” (debt of gratitude) in a speech during the Robredo Tarlac rally, Angeles’ daughter reacted by saying that their family owed their political career to “Boss Danding” not to the Aquino family.

Susan Yap, also running unopposed, said their support for Marcos is based on personal decisions not a party directive, since the NPC, now led by vice presidential candidate Senator Vicente “Tito” Sotto III, has not made a decision yet on who to endorse.

Tarlac 2nd District Representative Victor Yap, brother of the governor, said that they asked NPC leaders for freedom to choose Marcos and Duterte.

Most of the NPC mayors went to Uniteam, some of them present in the Paniqui rally, like San Manuel Mayor Donya Tesoro.

Moncada Mayor Estelita Aquino, also from NPC, has publicly declared support for Robredo and hosted the Vice President in her Tarlac rally held two weeks ago. The mayor said she and three other mayors are for Robredo.

A reelectionist whose challenger belongs to the late Marcos’ Kilusang Bagong Lipunan party, Estelita Aquino (not related to the Aquinos) told Rappler that she chose Robredo because “we believe in her, we like her leadership as Vice President.”

“I know she is competent and highly-educated, down to earth, and she worked hard not just in pronouncements but you really see her go out of her way to help those affected by the pandemic,” she said, adding that she had informed Governor Yap of her decision.

Tarlac, a province of 898,634 voters, was one of the only two provinces north of Manila where Marcos lost in the 2016 vice presidential elections – even through he already had the backing of Tarlac NPC leaders back then. The other province one was Batanes.

Will Marcos win the province this time around and completely bury the past here? – Rappler.com