Presidential aspirant Manny Pacquiao lays a wreath at the Press Freedom Monument in Cagayan de Oro on Saturday, April 30, 2022 to honor the 201 journalists killed since 1986. 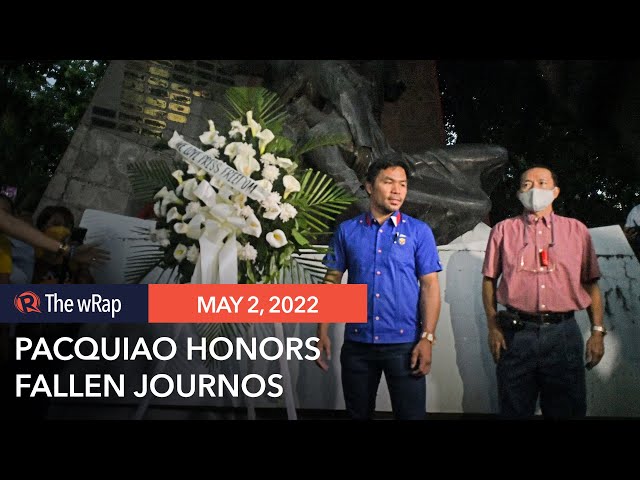 CAGAYAN DE ORO, Philippines – Presidential candidate Senator Manny Pacquiao paid a visit and laid a wreath at the Press Freedom Monument as soon as he arrived here on Saturday, April 30, to honor the 201 journalists killed since 1986.

Pacquiao is the first presidential aspirant to visit the Press Freedom Monument in Cagayan de Oro, which was built to honor fallen journalists in the Philippines.

“Press freedom is the face of democracy. We will not allow a return to the time of Marcos (the late strongman President Ferdinand Marcos) where the press is controlled by the government,” Pacquiao later told the local community press.

After the wreath-laying, Pacquiao attended a press conference with local journalists, where he answered topics ranging from graft and corruption, boxing, and his housing program.

He said he finds the red-tagging of journalists and activists as “unconstitutional” and promised it should be reviewed if he wins the presidency.

Pacquiao also extended his one-hour press conference and answered further questions from the local press, This was unlike last April 27, when presidential candidate Ferdinand “Bongbong” Marcos Jr., controlled the entry of media persons.

“Let’s extend this. You rarely have a press conference with me. We make use of the time we are here together,” Pacquiao said.

In his visit last Wednesday, Marcos and his media coordinators invited only a select few of new reporters drawing flak from Cagayan de Oro’s more veteran journalists who were not invited.

The Marcos camp also required the reporters to submit the questions they would ask two days before their press conference.

Rally at the amphitheater

Pacquiao later went to his rally which was held in the newly inaugurated amphitheater in Divisoria, Cagayan de Oro, becoming the first politician to use the venue after it was closed in 2000s.

The old Amphitheater was Cagayan de Oro’s cultural center and where the late Senator Aquilino Pimentel launched his anti-Marcos campaign during Martial law.

Speaking to his supporters, Pacquiao appealed for them to vote for him on May 9, which the crowd answered “Daug ka na (You will win)!”

Pacquiao’s staff estimated the crowd to be from 10,000 to 12,000 with people spilling to the side streets and watching from the nearby buildings.

Cagayan de Oro City Police Director Colonel Aaron Mandia also confirmed a crowd estimate of 10,000 to 12,000, given the size of a venue like the amphitheater. – Rappler.com