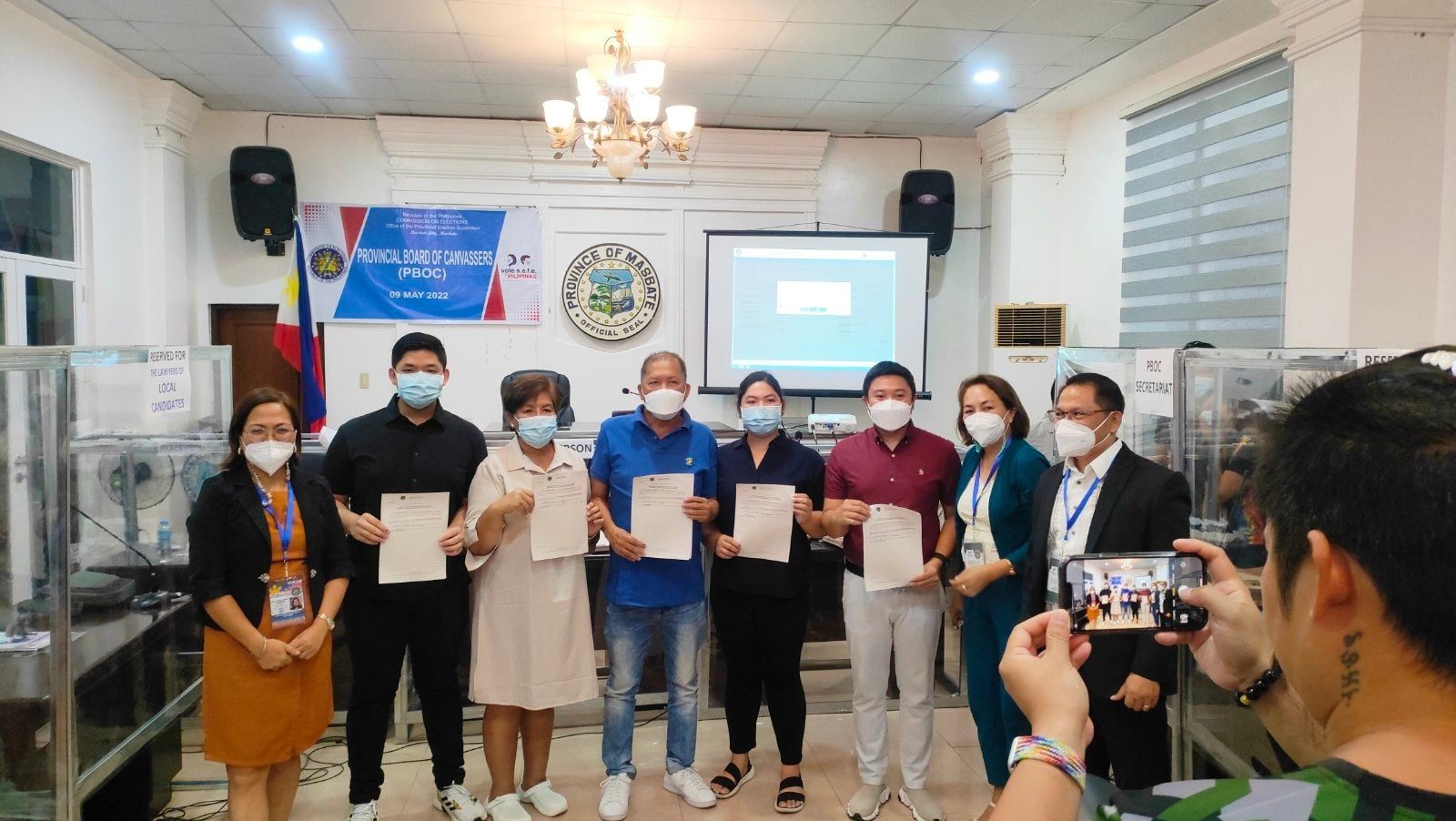 Facebook Twitter Copy URL
Copied
In Masbate, the Khos capture the executive and all legislative posts, which usually serve to check and balance each other

The 2022 elections also marked the first time that an entire family has captured the top executive and all the legislative seats of Masbate, the country’s rodeo capital.

Governor Antonio Kho won his reelection bid for his third and last term against his rival, Masbate’s 1st District Representative Narciso “Bong” Bravo Jr. based on partial, unofficial results from the Commission on Election’s (Comelec) transparency server as of 3:18 pm on May 13.

Olga got 251,229 votes against Jesi’s 138,689 votes. A physician by profession, she will replace her daughter in the province’s second top post.

It’s a Kho capture of both executive and legislative posts, which usually serve to check and balance each other.

Their children, Wilton, Richard, and Ara were also victorious in Masbate’s three congressional districts as the people’s representatives.

Richard Kho is the newest politician in the family. He is the leader in the 1st District against former Masbate representative Marvi Bravo, (NUP) wife of the outgoing congressman. Richard garnered 57,770 votes against Marvi’s 39,591.

Tonton’s wife, Tintin Hao-Kho, will be mayor in Mandaon town, which is in the 2nd District.

“Rest assured that we will do our best to bring forth excellent service to our beloved province of Masbate. Let us set aside our differences during the election period and unite as one for the betterment of our province!” Tonton said in his FB post.

After his term, he passed on the baton to his son Luis Raymund “LRay” Favis Villafuerte Jr., who served from 2004 to 2013 before being elected as Camarines Sur’s 2nd District representative in 2016.

LRay’s eldest son, Migz, became governor of Camarines Sur in 2013, defeating his grandfather who tried to regain the province’s top executive post after three terms in Congress from 2004 to 2013.

From Luis to Luigi, the Villafuertes have reigned in Camarines Sur for three decades.

In the 2022 elections, Luigi endorsed presidential candidate Vice President Leni Robredo, the first in the family to do so.

The older Villafuertes had met with Uniteam candidates but stressed they were only endorsing Marcos’ running mate, Davao City Mayor Sara Duterte. LRay refused to endorse Robredo too but said allies and followers were free to back her.

The clan has a complicated history with the Vice President. Her late husband, former interior secretary Jesse, was the late governor Villafuerte’s nephew. He was initially seen as a protégé of Luis but set a deep break with reform programs like a crackdown on gambling operations and increasing business tax collections.

In 2015, however, then-governor Migz and LRay endorsed the vice presidential run of Jesse’s widow Leni, then-representative of the province’s 3rd District. This was just three years after Leni said in 2012 that she was running for Congress to help stop the rule of the Villafuertes who had “badly managed” the province.

Dong served for nine years as mayor of Jose Panganiban town. He is the son of the late former Camarines Norte governor Casimero “Roy” Padilla Sr.

Noel defeated incumbent governor Al Francis Bichara – a veteran with almost half a century in politics – with a huge margin, 469,481 votes to Bichara’s 238,746.

But Bichara’s son Albert was elected councilor with the most votes in Ligao City.

Representative Joey Salceda (2nd District) of Albay was reelected for a third term, while his elder brother Jesap is the topnotcher board member for the 3rd District.

In the 1st District of Albay, Representative Edcel Lagman will add one voice to what is expected to be a tiny minority against the coalition being formed in the House by allies of presumptive president Ferdinand Marcos Jr.

In Catanduanes, Governor Joseph Cua was reelected and will serve with his brother, San Andres Mayor Peter Cua, who won as vice governor.

Cua won his reelection bid with 101,838 votes against his rival Shirley Abundo, who garnered 51,967 votes.

Cua said that the next three years of his leadership would focus on health programs, specifically the expansion of the hospital bed capacity at Eastern Bicol Medical Center, also turning it into a training center for students.

Cua will focus, too, on eco-tourism in the province by improving and creating more livelihood for abaca planters.

In Sorsogon province, Casiguran town Mayor Boboy Hamor was elected governor while his wife Ester, was reelected mayor of Sorsogon City for the second term.

Dette Escudero, younger brother of outgoing governor Francis “Chiz” Escudero – among the leaders in this year’s Senate race – won the congressional race in the 1st District of Sorsogon against Joan Lorenzano, 141,922 votes to 71,297.