Facebook Twitter Copy URL
Copied
Based on the Comelec 2nd Division's ruling, Marcos' decision not to appeal his 1997 Court of Appeals conviction for failure to file his tax returns seems to have solved his current problems

MANILA, Philippines – The year 1995 was a terrible year for Ferdinand “Bongbong” Marcos Jr. In May, he lost his bid for the Senate, placing 16th in the race for 12. By July, he had been convicted of tax evasion and failure to file income tax returns (ITRs).

He was sentenced to up to three years in prison, with imprisonment sanctions for failure to file his ITRs. But the offense was bailable, so he remained free as he appealed his conviction with a higher court.

In October 1997, the Court of Appeals gave him a major win. He was acquitted of tax evasion. For his sustained guilt for failure to file his ITRs, the only sanction he was meted out was payment of deficient tax and fines. The CA did not explain why it removed the prison sentence.

In 1998, Marcos ran and won as Ilocos Norte governor. In 2001, he asked the Supreme Court for an extension to appeal his CA conviction, but later opted not to file an appeal altogether. He allowed the 1997 ruling to become final and executory.

Fast forward to January 17, 2022. The decision of the Commission on Elections (Comelec) 2nd Division junking the petition to cancel Marcos’ certificate of candidacy (COC) proved something: the 1997 CA ruling he didn’t appeal may just have solved his problems.

Commissoners Socorro Inting, Antonio Kho, and Rey Bulay of the Comelec 2nd Division ruled that the CA decision did not disqualify the son of the dictator, although the 1st Division handling another complaint against Marcos is made up of three other commissioners who can very well rule the opposite way.

Here is a summary of the 2nd Division’s ruling: How will the 2nd Division rule on the Monsod petition?

The 2nd Division said the petition to cancel the COC should have been summarily dismissed because it invoked grounds for disqualification when the only ground to cancel a COC should be material misrepresentation. However, the 2nd Division still ruled on the disqualification grounds “if only to fully and finally settle the matter in the case because of its paramount importance.”

The 2nd Division handles one more pending disqualification petition against Marcos, the one filed by Ilocano Martial Law victims, represented by Constitution framer and former Comelec chief Christian Monsod. Would the 2nd Division likely deny that too, considering its ruling in the earlier case?

It’s hard to say because the Monsod petition has one more argument: that the conviction disqualified Marcos as a voter, and one of the constitutional requirements to be a president is to be a registered voter.

The deadline for the Monsod petitioners and the Marcos camp to submit their memoranda was Monday, January 17, after which the case is submitted for resolution.

Read the full text of the Second Division ruling, as well as Kho’s separate opinion, on the petition to cancel COC here. 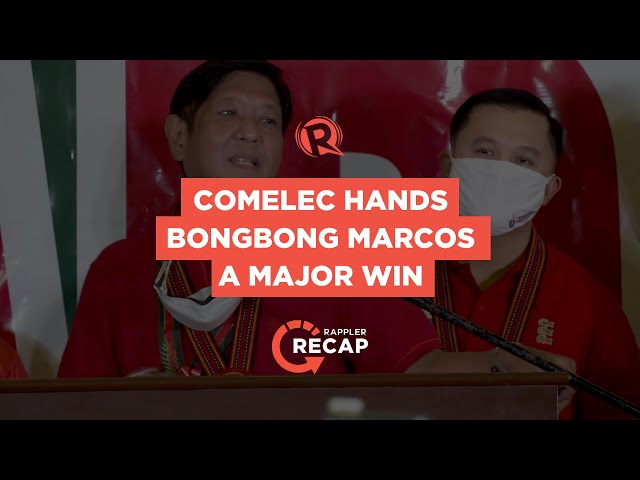