[WATCH] Yellow out, pink is in: Robredo runs for president as an independent 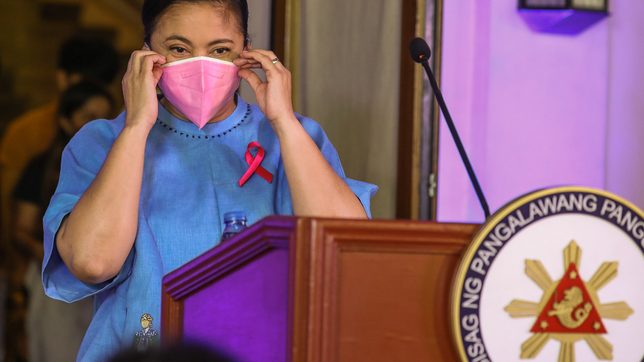 PINK AND BLUE FOR ROBREDO. Vice President Leni Robredo is garbed in colors of pink and blue as she launches her presidential candidacy on October 7, 2021.

Facebook Twitter Copy URL
Copied
Vice President Leni Robredo distances herself from the 'dilawan' brand of the Liberal Party, where she will remain chairperson

Philippine opposition leader and Vice President Leni Robredo is running for president in 2022, but not as standard-bearer of the once-ruling Liberal Party (LP) that she chairs.

Instead, Robredo is running as an independent candidate – a clear sign she has not given up on her mission to unite the opposition in 2022.

She even shed LP’s yellow political color during her candidacy launch on Thursday, October 7.

Robredo faced the nation donning a pink face mask and a blue blouse with a huge pink ribbon clipped on her chest.

This is seen as a strategic move on the part of Robredo, as being LP’s presidential bet would make it much harder for her to forge any alliance with other presidential contenders. Robredo will stay as LP’s chairperson, however.

She has not given up on her mission to unite all dissenting forces against President Rodrigo Duterte in 2022, believing this was the only way the opposition could win the elections.

Robredo’s political career has so far been burdened by her association with LP, a party perceived to be elitist and has been demonized Duterte himself and his supporters.

It’s quite a dilemma for Robredo, as she has a knack for touching base with the masses. This is all thanks to her vast experiences working with communities long before she was thrust into politics when her husband, interior and local government secretary Jesse Robredo, died in 2012.

Though she has distanced herself from the “dilawan” brand, Robredo’s most trusted allies from the party will still play crucial roles in her 2022 presidential campaign.

Party president Kiko Pangilinan is her running mate, a last-minute choice for the man who was supposed to seek a Senate reeleection in 2022.

Will these moves be enough to convince the rest of the country that Robredo is the unifying opposition candidate she hopes to become?

[WATCH] On The Campaign Trail with John Nery: The mechanics of pro-Marcos disinfo

[WATCH] On The Campaign Trail with John Nery: The power of the Marcos appeal