Facebook Twitter Copy URL
Copied
(5th UPDATE) Check out the agreements that have been signed by local government units, as well as pending deals, for COVID-19 vaccines

Local government units (LGUs) in the Philippines welcomed the new year by announcing they have allocated millions in funds to give their residents free COVID-19 vaccines.

Others have bared their plans as early as mid-2020.

Here is the table of LGUs with vaccination plans, including deals that have already been signed:

Below are the details about each LGU, in alphabetical order:

Angono Mayor Jeri Mae Calderon announced that the municipal government of Angono, Rizal had signed a confidentiality agreement with AstraZeneca, effective as of Monday, January 18.

Medical frontliners and senior citizens will be prioritized in the vaccination program. Calderon says the local government will soon roll out pre-registration for residents who want to take the vaccine.

The Antipolo City government has alotted P300 million for the procurement of COVID-19 vaccine doses.

Ynares said the vaccine program is voluntary, adding that she understands the concerns of some Filipinos on vaccines following the Dengvaxia scare.

The Bacolod City government has signed a multilateral agreement and confidentiality agreement with AstraZeneca on the availment of COVID-19 vaccine doses.

Mayor Evelio Leonardia said that the city government will earmark P300 million for the procurement of coronavirus vaccine doses.

The Baguio City government has entered a multipartite agreement with AstraZeneca, NTF, and DOH on Sunday, January 10. The city allocated P100 million for the vaccination program which will benefit 190,000 residents.

The Bangsamoro government has set aside P500 million of its recently passed 2021 budget for the procurement of COVID-19 vaccine doses.

Cagayan de Oro City has set aside P500 million for the acquisition of COVID-19 vaccine doses for city residents.

The city government earlier acquired bio-freezers for vaccine storage. “To ensure that we are ready to store the vaccines ones in arrives here,” Mayor Oscar Moreno said.

“We will work out as best as we can to institute an efficient, effective vaccine rollout program with the city health office, Northern Mindanao Medical Center and the Department of Health,” Moreno said.

The local government of Cainta, Rizal, has a P150 million budget for COVID-19 vaccines.

Caloocan City Mayor Oscar Malapitan said their local government has alloted an initial P125 million ($2.6 million) for free COVID-19 vaccines.  “This is to augment the vaccines to be allocated to our city by the national government,” Malapitan said in a statement.

As early as July 2020, Cavite Governor Jonvic Remulla has been preparing for the vaccination of Caviteños.

In a Facebook post on July 30, Remulla said Cavite would implement a provincial ID system for effective administration of the vaccine once it becomes locally available.

In August, Remulla said some 10,000 Caviteños would participate in September in trials for the coronavirus vaccines developed by American and British pharmaceutical companies.

Food and Drug Administration (FDA) Director General Eric Domingo reminded them, however, that they must first secure clearance with the FDA before joining any clinical trials.

This is short of the projected P500 million ($10.41 million) the city earlier said they needed to vaccinate all residents, but Vice Mayor Michael Rama said any deficiencies would be taken up by the Cebu City Council through supplemental budgets this year.

Dagupan City signed a deal with AstraZeneca for 40,000 vaccines doses. The local government had allotted P10 million for the vaccination program.

Davao City, hometown of President Rodrigo Duterte, is targeting to shoulder the vaccinations of 1.2 million of its residents in two years, according to Mayor Sara Duterte.

They have no set budget allocation yet but she said funds will be “unrestricted” as City Hall will spend whatever amount to reach their 1.2 million vaccinations target.

The city has signed a Non-Disclosure Agreement with British-Swedish pharmaceutical firm AstraZeneca but plans to order vaccines from more than one supplier.

The provincial government of Iloilo will set aside P95 million to procure COVID-19 vaccines for residents. They plan to obtain 271,000 doses of AztraZeneca with those funds.

Arthur Defensor, the province’s governor, said they would prioritize senior citizens, and those with comorbidities in their vaccination program.

In a Facebook post on Monday, Iloilo City Mayor Jerry Treñas said that they would look for “ways and means” to vaccinate all residents of the city. Iloilo has set aside an initial of P200 million for the vaccines.

Treñas announced that the city signed a multipartite deal with AstraZeneca, NTF, and the DOH, for the purchase of 600,000 doses of COVID-19 vaccines.

Despite the series of natural disasters that hit Albay, Legazpi City allotted P200 million for purchase of the vaccine and intended for their 197,000 priority population.

“The funds will be taken from local budget with the clearance from Department of Budget for us to realign the 20% development funds, calamity funds (70% of pre-disasters funds), supply, infrastructure and other source of funds that could be allowed by the Department of Budget,” said Mayor Noel Rosal.

The Makati city government is allocating P1 billion ($20.83 million) in 2021 for the procurement of coronavirus vaccines that would be administered to all residents for free. 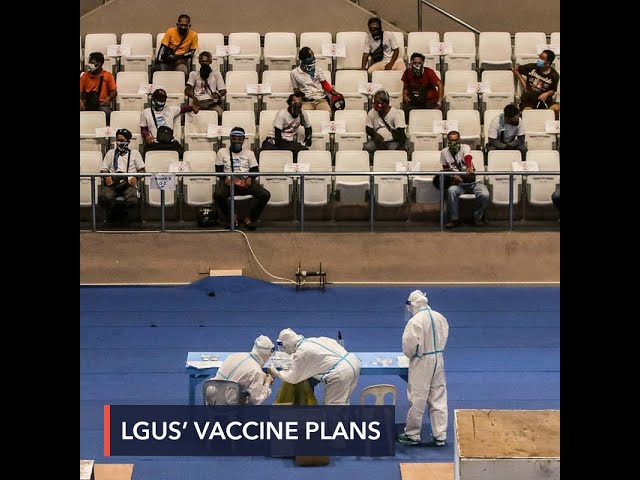 In a statement on Monday, January 4, Mayor Abby Binay said they are coordinating with Philippine vaccine czar Carlito Galvez Jr and the Inter-agency Task Force on Emerging Infectious Disease (IATF-EID) to finalize details for the planned mass vaccination in Makati.

Once Makati gets the green light from IATF-EID, the city council would pass the P1-billion supplemental budget to buy the COVID-19 vaccines.

“We are aiming for 100% vaccination in Makati,” said Binay.

The Philippine capital of Manila has signed a deal with British-Swedish company AstraZeneca for 800,000 doses of its vaccine against the novel coronavirus (COVID-19).

In a statement on Monday, January 11, the Manila City Public Information Office announced that the city has entered into a tripartite agreement with the multinational company and the National Task Force against COVID-19 (NTF).

Navotas Mayor Toby Tiangco said they would set aside an initial P20 million ($416,592) for COVID-19 vaccines.

Noveleta, the smallest town in Cavite, has set aside P10 million for the procurement of COVID-19 vaccine.

“Priority will be those who cannot afford the vaccine. The poorest of the poor especially frontliners such as tricycle drivers, PUV drivers, informal vendors like fishball, banana cue vendors, and the like,” said Noveleta Mayor Dino Reyes Chua.

Mayor Trina Firmalo-Fabic announced plans of allotting P5 million for COVID-19 vaccines. Odiongan local government is eyeing to sign a deal with either AstraZeneca or Moderna.

Medical frontliners, senior citizens, and persons with disabilities will be prioritized in their vaccination program.

Gomez said the city aims to get at an initial 270,000 doses for the city’s residents.

Mayor Vico Sotto said that Pasig set aside P300 million for COVID-19 vaccines, which could still be increased depending on the availability of funds. Priority would be given to medical frontliners and senior citizens.

The local government of Parañaque signed an agreement for the purchase of 200,000 doses of AstraZeneca vaccines. Parañaque City has allocated an initial P250 million for vaccines, according to Mayor Edwin Olivarez.

Puerto Princesa City Mayor Lucilo Bayron signed on Monday, January 4, an executive order, creating and organizing the vaccination plan of the city. This includes an allocation of P500 million for the procurement of COVID-19 vaccines.

Quezon City, the biggest city in Metro Manila, has also allocated P1 billion ($20.83 million) for the purchase of COVID-19 vaccines in its 2021 budget after the City Council passed a resolution calling for speedy action on cornering a much-needed supply.

Mayor Joy Belmonte told Rappler that Quezon City entered into a deal on January 5 to secure 750,000 doses of the COVID-19 vaccine developed by British-Swedish firm AstraZeneca.

The deal signed by Quezon City is a tripartite agreement with AstraZeneca Pharmaceuticals Philippines and the National Task Force vs COVID-19 (NTF).

As of end-November, Quezon City had been in talks with vaccine suppliers. At that time, Belmonte had wanted to be sure that the city did not reserve or make an advance payment for vaccines which might not be approved by the Food and Drug Administration.

San Juan City Mayor Francis Zamora said they are in talks with the national government and pharmaceutical companies to secure supplies of the vaccines.

In a Facebook post on Monday, Zamora said San Juan residents may pre-register for their free vaccination program through their respective health centers or barangay halls. They can also enlist through this online registration form.

In an announcement on Facebook, Gatchalian said 320,000 residents will be vaccinated with the AstraZeneca vaccine, or 70% of the target population of the city which includes people 18 years old and above.

“The city government of Valenzuela has already started preparing for the #VCVax Valenzuela City vaccine rollout plan,” he said.

The vaccine doses are expected to arrive in the 2nd half of 2021.

Quezon City earlier signed a deal with AstraZeneca for 750,000 doses.

Vigan City Mayor Juan Carlo Medina announced on Sunday, January 10, that the local government has entered into a multilateral agreement with AstraZeneca Pharmaceuticals Philippines, NTF, and DOH for the purchase of 100,000 to 120,000 doses of COVID-19 vaccines.

The amount is enough to vaccinate all residents in Vigan City, aged 18 and above, said Medina in a statement.

Mayor Beng Climaco announced on Monday that Zamboanga City was ready to purchase COVID-19 vaccines amounting to an initial P200 million from the city’s 2021 Executive Budget.

But no less than President Rodrigo Duterte himself revealed in December that certain members of his Cabinet and close-in security have already been immunized – and with unregistered COVID-19 vaccines at that, a clear violation of the national government’s own laws and protocols. 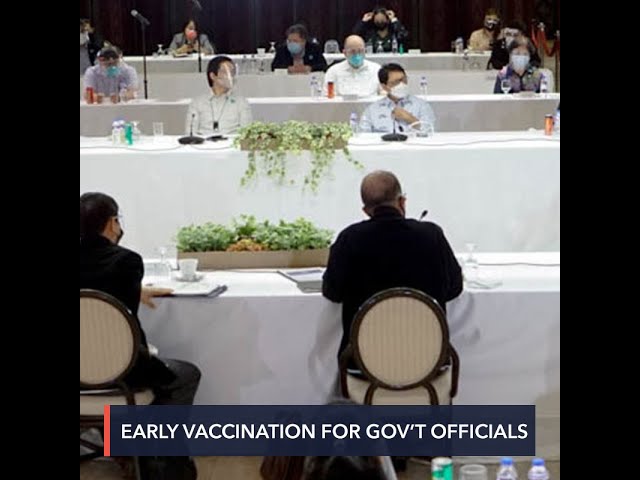