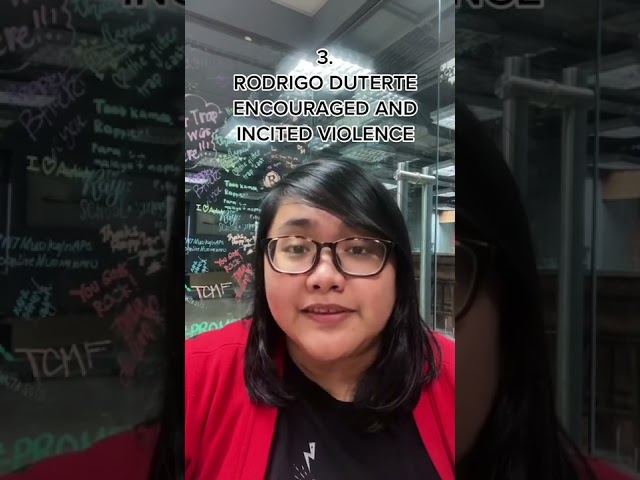 Human rights lawyer Ross Tugade said remembering the killings under Duterte’s war on drugs, as well as other human rights abuses, is “the first step to any form of justice” as domestic mechanisms continue to be ineffective in holding perpetrators accountable.

“We owe it to the victims and their families to never forget what happened during the Duterte administration,” she told Rappler in an interview.

“While it may seem now that everyone is focused on the [Marcos] administration, the challenge really is to effectively communicate the message that the drug war and its violence must not be forgotten,” she added.

At least 6,252 individuals were killed in police operations under Duterte’s war on drugs, his administration’s flagship campaign, as of May 31, 2022. This number does not include victims of vigilante-style killings, which human rights groups estimate to be between 27,000 and 30,000.

Documents obtained by Rappler, however, show that the Philippine National Police (PNP) already recorded 7,884 deaths between July 1, 2016 to August 31, 2020.

As developments unfold at the International Criminal Court, particularly Prosecutor Karim Khan’s decision to seek resumption of his investigation, there should be continued efforts to preserve every piece of information that gives a factual picture of what the “worst human rights crisis” post-Martial Law looked like.

Rappler compiles various reports of local and international groups and institutions that documented Duterte’s violent war on drugs amid blatant whitewashing, if not a total lack of transparency, by his administration and allies.

The report by Amnesty is based on 110 interviews. According to one police officer the group interviewed, they are paid between P8,000 to P15,000 with cash coming from “headquarters” with “no incentive for arresting.”

The police also reportedly paid other people to carry out executions, mostly in poorest communities.

Police are falsifying evidence recovered from alleged drug personalities killed in anti-drug operations, according to a report released by Human Rights Watch (HRW) on March 1, 2017.

In its four-month investigation that covered 32 deaths between October 2016 and January 2017, HRW found that state agents “bolster their claims” that they acted in self-defense by “routinely” planting guns, bullets, and illegal drugs next to the bodies of the victims.

The report also said that the PNP is responsible for the wave of vigilante-style killings across the Philippines, pointing out that details of executions carried out by unidentified suspects “mirror countless other operations by undercover police.”

PhilRights said that its analysis of killings between 2017 and 2018 showed that victims were “male adults within productive age range, primary breadwinners, low- or irregular-wage earners, of low educational attainment, and residents of urban poor communities.”

This leaves women, now widows, as primary breadwinners and caregivers of families, the group said in its report released on September 19, 2018.

The killings in the Philippines that stemmed from Duterte’s violent war on drugs already reached the threshold of crimes against humanity, Amnesty International pointed out in its report released on July 8, 2019.

The group examined the circumstances surrounding at least 20 drug-related killings between May 2018 and April 2019, and identified patterns, including the alleged planting of evidence and inconsistencies in police reports, among others. Families also fail to file cases because police deny their request for official documents.

These findings, Amnesty said, show that killings are “deliberate and systematic” in nature and appear to be part of the “government-orchestrated attack against poor people.”

A May 2020 report released by Human Rights Watch detailed the “harmful consequences” on children left behind by victims of Duterte’s war on drugs.

The group documented “drastic changes” in children, saying that these were brought about by psychological distress due to having witnessed the death of a loved one. These effects can last well into adulthood.

The report also highlighted the lack of government support for children affected by the drug war, on top of challenges faced by those left behind. Orphaned children had to take the role of primary breadwinner, dropping out of school to work odd jobs to put food on the table.

PhilRights: Justice system in PH leaves no hope for families

Dishonesty and lack of transparency are glaring features of the Duterte administration that hinder families of drug war victims from taking steps toward justice, according to a PhilRights report released on February 5, 2020.

In its analysis covering killings between 2017 and 2019, the group found that police investigations were “rarely down” after incidents of killings, while state agents allegedly discourage families from pursuing legal actions.

“Most of the families have expressed that they have lost their trust with the justice system,” the report said.

“Some families were told that nothing can be done to the cases of the victims because they are already dead, and that there is no point investigating their cases,” it added.

The widespread killings in the Philippines “suggest that [Duterte’s] public comments may have incited violence and may have had the effect of encouraging, backing or even ordering human rights violations with impunity,” according to the report of the United Nations Office of the High Commissioner for Human Rights (UN OHCHR).

The office of UN rights chief Michelle Bachelet also found documents that show that “police repeatedly recovered guns bearing the same serial numbers from different victims in different locations.” Meanwhile, domestic mechanisms are not effective in getting accountability for the killings.

The comprehensive report was released on June 4, 2020, and was done following a resolution by the UN Human Rights Council.

InvestigatePH: Wide-range of abuses under Duterte

In its first report on March 15, 2021, Global coalition InvestigatePH said the human rights violations under Duterte intensified following the release of the comprehensive UN report. It also rejected the government’s claim that there are functioning local justice mechanisms.

“The state forces that perpetrate violence are obstructing investigations, investigations that are carried out have usually been neither impartial nor independent, but are overseen wholly or in part by the agencies responsible for abuse,” the group said.

InvestigatePH released a second report on July 6, 2021 that made mention of how Duterte’s “killing machine perfected through the [war on drugs] is now being turned on human rights defenders and political opponents of government policy.”

In the third report released on September 13, 2021, the coalition said that the militaristic response of the Duterte administration to the coronavirus pandemic “only exacerbated economic hardships” faced by Filipinos.

It is apparent that the widespread killings in the Philippines under Duterte “took place pursuant to or in furtherance of a state policy,” according to the International Criminal Court’s pre-trial chamber on September 15, 2021.

This is just one of the many observations by the court as it greenlit ICC Prosecutor Karim Khan’s investigation into the drug war killings from July 2016 to March 16 2019, or up until the Philippines ceased to be a member-state of the ICC. The probe will also cover killings in Davao City from 2011 to 2016.

Citing government documents, the ICC pre-trial chamber said there is a “clear link between killings and the government’s formal anti-drug campaign,” adding that the violent rhetoric of Duterte and other officials contributed to the situation on the ground.

Read this story to find out more about what the ICC has said about Duterte’s war on drugs.

Read the full decision below:

PhilRights said there is a “clear intent to muddle the truth” about the impact of Duterte’s war on drugs, based on its collated incidents where death certificates had misdeclared or used erroneous information.

In a report released in December 2021, the group said it documented how “multidimensional and interrelated” the impact of Duterte’s drug war campaign is on families, adding that the damage of his administration “will be long-term.”

“We are in a human rights crisis, one that has caused and is continuing to cause suffering and will have manifold impacts in the years to come,” PhilRights said.

The Commission on Human Rights (CHR) said that the Duterte government “failed in its obligation to respect and protect human rights of every citizen, in particular, victims of drug-related killings.”

“It has encouraged a culture of impunity that shields perpetrators from being held to account,” the commission said in a report released in May 2022, detailing the ways its own investigations were stonewalled by the Duterte government.

It said that its probes were “hampered by the predilection and uncooperativeness” of government agencies involved in the war on drugs and that the subpoenas and requests for documents sent to the Philippine National Police “were oftentimes refused, denied, or ignored.”

The report also reiterated the commission’s findings of patterns of discrepancies between police reports and accounts of witnesses, as well as indications in the injuries of victims that reflect “the brutality of the anti-drug campaign and indicates possible abuse of strength and intent to kill by the perpetrators.”