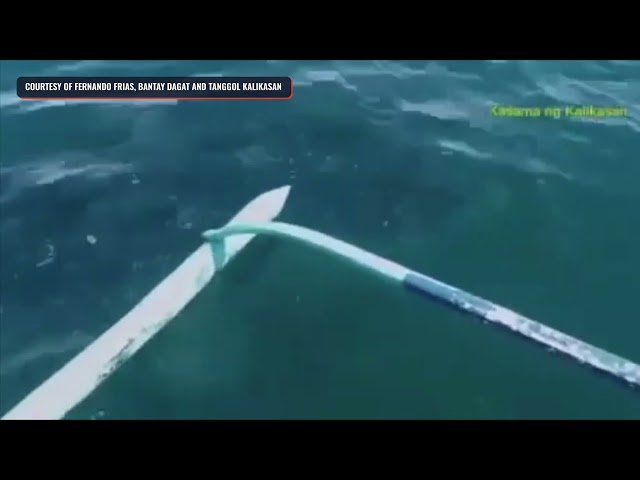 QUEZON, Philippines – Sariaya Bantay Dagat member Fernando Frias and fellow environmentalists were on a motorboat in Tayabas Bay early Thursday, November 24, when he saw a big shadow moving in the water around the boat.

Within seconds, other dark shapes appeared, and Frias saw the distinctive spots and shape of the butanding, the local name for the whale shark (Rhincodon typus).

The 42-year-old Frias told Rappler on Friday night, November 25, that they saw the shoal of around 20 whale sharks at about 7 am in the municipal waters of Sariraya, Quezon, 100 kilometers south of Manila.

In the video sent to Rappler by Frias’ companions from Tanggol Kalikasan, the environmentalists could not contain their glee upon seeing the whale sharks’ huge fins emerging from the water as they flitted near and under the boat.

“Parang naglalaro sila,” Frias said. (They seemed to be playing.)

Jay Lim of Tanggol Kalikasan said they saw the whale sharks just over a nautical mile from the coast of Barangay Bignay 2.

He added that the environmental group had gone out to explore Tayabas Bay after reports of sightings in the nearby town of San Juan, Batangas.

The whale sharks were approximately 15 to 18 meters long, according to Frias.

The whale shark is the world’s biggest fish. In a free environment, it can live to a century.

The butanding is a tourist draw in Donsol, Sorsogon, in Bicol Region.

But a decade back, the species had almost disappeared from Lamon Bay on the opposite side of Quezon due to a combination of slaughter and the effects of blast fishing and other harmful fishing methods.

That they seemed to gambol in rhythm with their boat, instead of speeding off, indicated they did not feel threatened in the bay, he added.

The butanding remains vulnerable, however.

Fisherfolk in Atimonan town found and freed in August 2021 a three-meter long whale shark that had been trapped in a fishnet in a cove of Lamon Bay.

Danilo Larita Jr. of the Sariraya Bureau of Fisheries and Aquatic Resources warned that capturing butanding is punishable by imprisonment.

He also advised groups that want to see the whale shark in Tayabas Bay to coordinate with authorities and use the bigger motorboats to avoid accidents. – Rappler.com