REAL-LIFE EDUCATION. Two mothers of children rounded up by police on June 9 during a tilling activity in Hacienda Tinang, Concepcion town, Tarlac say children have a right to learn directly about the lives of marginalized sectors, like farmers.

ANGELES CITY, Philippines – For Donna Miranda and other activists, helping communities campaign for justice can be a family affair.

Exposing their children to peers from peasant and worker families or indigenous youth displaced by conflict allows the family’s younger members to understand when their parents have to travel as part of their advocacy tasks.

So Miranda was angry, but not surprised, when she learned police had filed child exploitation complaints on June 17 against her and six other activists arrested during a tilling activity in Hacienda Tinang in Concepcion, Tarlac.

The complaint was because Donna and her partner, Angelo Suarez, had brought their son to their “bungkalan” (tilling or cultivation) activity on June 9.

Concepcion police also rounded up five children when they broke up the activity, but later turned over the minors to legal counsels.

Miranda, a co-convenor of SAKA; and Suarez, a volunteer with the Unyon ng Manggagawa sa Agrikultura, were among the 93 people arrested that day and the 83 slapped with complaints for illegal assembly and malicious mischief, disobedience and resistance to authority, obstruction of justice, and usurpation of real rights. 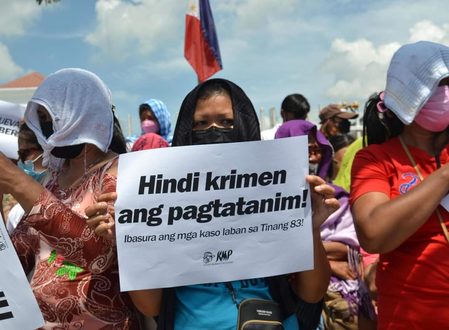 “Children have the right to learn,” Miranda told Rappler in an interview conducted via a messaging app. It was the local police who disregarded the Convention on the Rights of the Child, she stressed.

(In fct, the police were the ones who violated the right of the youth to understand the condition and plight of farmers and to get involved, even in a small way, in social, economic, and political discussions.)

“The new complaints of child exploitation and human trafficking against the Tinang 83 are not just trumped up cases. They’re actually aimed at covering up the human rights violations police inflicted on us and the childen traumatized by their brutality towards the farmers and their supporters,” Miranda added in a mix of Filipino and English. 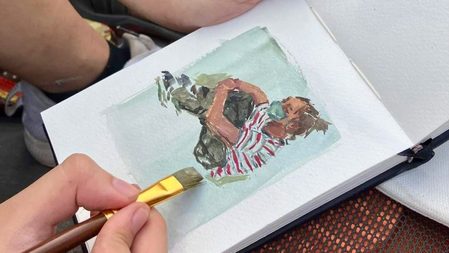 Juliet Aguilar, mother of one of the students who joined the activities at Hacienda Tinang, also belied the fresh complaints of child exploitation and human trafficking filed against advocates and a journalist.

She called basis of the new complaint – that the children allegedly said they were at the cultivation site because of promised jobs – a lie and slammed the methods used by cops. Aguilar is not among those charged, but stood up for them.

“Walang sinasabi sa kanila na ganoon. Paano sila bibigyan ng trabaho eh anak ko nag-aaral ng senior high?” said Aguilar?(They were not told anything like that. How could they be there for jobs, when my child is a senior high school student.)

“If it was human trafficking, I would be the first to chase after my child,” she told Rappler. “But I did not fear and expected my child to stay safe. I am disappointed with the police because their task should be to protect the youth and the farmers,” she said.

Aguilar’s daughter is a senior high school student at a private school in Manila. She told Rappler her daughter told her she wanted to know the status of the farmers and join the activities in Hacienda Tinang.

Aguilar allowed her daughter to join the activities to give her the tools to be critical with what is happening in society, and to develop compassion, which is also part of self-development, she said.

The justness of the cause of helping farmers, she added, was validated when the Department of Agrarian Reform on June 20, reaffirmed the 178 farmers of Hacienda Tinang as rightful owners of the disputed 200-hectare land within the estate after three decades of agrarian reform struggle.

(They did nothing wrong. It is not a crime to draw attention to the plight of farmers. How can there be trafficking with the parents’ consent? For me, it is good to see children interested in learning about our society.) 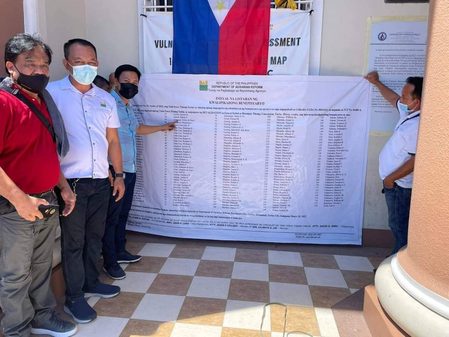 Police Staff Sergeant Ma. Claire Mariano, assistant Women and Children Protection Desk at the Concepcion municipal police station, claimed in her affidavit that when she questioned the minors, they said they would be given jobs at the farm. She said students were also encouraged to till land and observe the picket and a protest rally.

Her affidavit did not say whether lawyers were around to protect the rights of the minors during questioning.

During the June 9 dispersal, Aguilar said she was still in communication with her daughter. She also saw videos on social media showing armed police dragging individuals.

Aguilar said they immediately went to Tarlac when she found out about the dispersal but the local police did not allow them to see her daughter inside the detendion cell.

Aguilar now catches her daughter quietly staring at nothing. She said she can only help her understand about her experience as the incident had an impact on her mental health. Prior to the Tinang plight, she added, the minors did not know each other. – Rappler.com