PROMULGATION. Nobel laureate and Rappler Holdings Corporation president Maria Ressa arrives at the Court of Tax Appeals in Quezon City for the promulgation of four tax cases vs RHC, on January 18, 2023.

Facebook Twitter Copy URL
Copied
'We hope to see the Philippines leave the mistakes of its past behind,' say 11 Nobel Peace Prize laureates, a day before their fellow Nobel laureate Maria Ressa was acquitted of tax evasion charges

The Nobel Peace Prize laureates said in a letter released to media on Tuesday, January 17, that Ressa has been subjected to a “vicious and widespread campaign of hate and even threats on her life on social media, particularly on Facebook.”

“Such campaigns have become far too common on social media, and have become dangerous tools to provoke violence and weaken democracy,” they said.

Ressa has faced criminal charges for alleged tax evasion, violation of the anti-dummy law, and cyber libel, which she, Rappler, and her supporters believe to be politically motivated. They were all filed during the previous administration under Rodrigo Duterte.

“We hope to see the Philippines leave the mistakes of its past behind. We ask you to assist in bringing about a rapid resolution to the unjust charges against Maria Ressa and Rappler,” the Nobel laureates said.

The following were signatories of the open letter:

On Wednesday, January 18, a day after the Nobel laureates’ letter was released, the Court of Tax Appeals acquitted Ressa and Rappler of tax evasion charges.

After the acquittal, Ressa said that there was still more work to do.

“Thank you, Court of Tax Appeals, our shareholders who stood by us during the darkest times – and were themselves harassed, our partners who stuck their necks out, and for all Filipinos who believe in the values that keep a vibrant democracy alive,” she said. In their open letter to Marcos, the laureates said they supported Marcos in his goal to unite and heal the nation, as well as his efforts to bring peace and prosperity to the Philippines.

“It is our hope that your plans will include strengthening one of the bedrocks of global democracy, a free and independent press. The free media, increasingly under threat by autocrats and would-be autocrats, is rightfully fiercely protected by democracies across the globe,” they said.

The laureates reminded Marcos that Ressa has become the international face of the free press in the Philippines. Her credentials also brought her international recognition even before she co-founded Rappler.

“She is an asset to the nation, and an inspiration to her fellow journalists and democracy builders around the world,” they said.

But, at home, apart from the “vicious and widespread campaign of hate,” the Nobel winners said that Ressa’s arrests, indictments, and possible prison sentences were “political persecution.”

One of Ressa’s charges for cyber libel, they said, “[opened] the door to unchecked harassment and imprisonment by government officials of journalists, columnists, and virtually any online critics of the Philippine government.”

The laureates appealed to Marcos to ensure justice for Ressa, and to initiate negotiations to clarify Rappler’s issues as a company. “The welcome result would be a strengthening of the rule of law and a rebirth of respect for the fundamental pillars of democracy in the Philippines,” they said.

Ressa and Muratov won the Nobel Peace Prize in 2021 “for their efforts to safeguard freedom of expression, which is a precondition for democracy and lasting peace.” 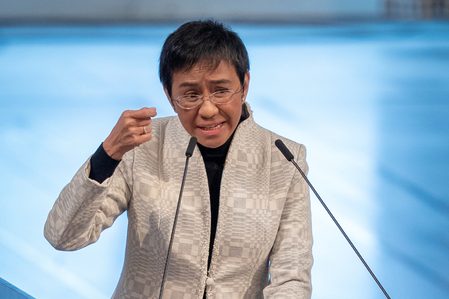 Remulla: Some lawyers use ‘invented cases’ to hold Japanese nationals in PH