Unless there’s ‘big threat,’ PH can wait for IRR before enforcing anti-terror law 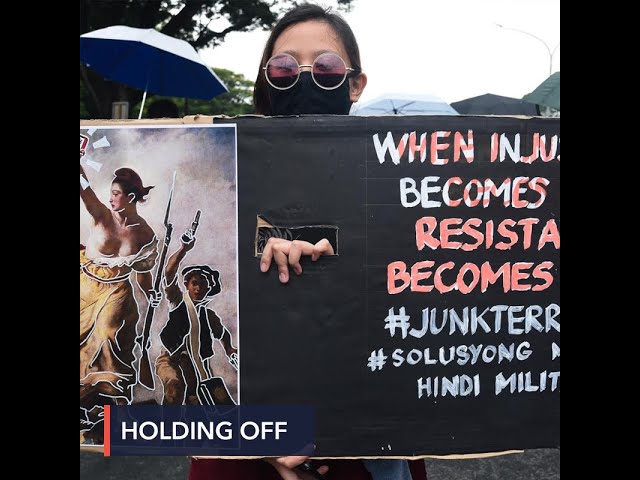 Unless there’s a “big” terror threat, the Philippine government can wait for the promulgation of the implementing rules and regulations (IRR) of the anti-terror law before enforcing the controversial measure, Interior Secretary Eduardo Año said on Wednesday, July 22.

“Kung nakabingit ‘yung buhay ng ating mamamayan, we have to implement the law. Now, kung wala namang malakihang terrorist threat, we can wait for the IRR,” Año said during the pre-State of the Nation Address (SONA) forum of the Cabinet peace and security cluster.

(If the lives of our countrymen are on the line, we have to implement the law. Now if there’s no big terror threat, we can wait for the IRR.)

Defense Secretary Delfin Lorenzana agreed, saying, “We could wait for the IRR, but if there is a terroristic action now, we are going to answer.”

It was a response to Justice Secretary Menardo Guevarra’s call for law enforcement to be “prudent” and wait for the IRR before implementing the law, even if in general, there’s no restriction on doing so.

Guevarra, who is tasked to craft the IRR, said there are some provisions in the law that need clarifications, such as the crimes of threatening, proposing, or inciting to commit terrorism. Guevarra also said they need to thresh out the definitions of terror under Section 4 which makes dissent a terror act if it has an intent to cause harm or risk. (READ: EXPLAINER: Comparing dangers in old law and anti-terror bill)

The Supreme Court petition filed by Constitution framers Christian Monsod and Felicitas Arroyo pointed out that if the IRR is needed to enforce the law, then the law is void for vagueness.

“Again, the parameters and the standards must be laid down in the law itself, not in succeeding Implementing Rules and Regulations. As RA No. 11479 does not set these standards and will have to rely on the IRR for more clearly-defined parameters, it must be struck down as unconstitutional,” said the framers’ petition.

The latest group – the 11th so far – to file a petition against the anti-terror law is the group of retired Supreme Court justices Antonio Carpio and Conchita Carpio-Morales, joined by professors of the University of the Philippines (UP) College of Law. – Rappler.com