Robredo on ‘unforgivable’ Pharmally scandal: ‘How do these people sleep at night?’ In her weekly DZXL radio show on Sunday, September 26, the Philippine opposition leader said corruption, especially at a time when people are dying due to the coronavirus crisis, is simply “unforgivable.”

(Whenever I’m watching the hearings, Ka Ely, I keep on thinking: How do these people sleep at night? So many Filipinos are suffering, and yet all they can think about is extortion?)

(It’s an injustice, Ka Ely. At a time when people are suffering, this is all you can think about?)

Asked by blue ribbon committee chairman and Senator Richard Gordon if by tampering with the production stickers of the face shields they “swindled the government,” Mago said, ”I believe that is the case.”

Pharmally, owned by a Singaporean wanted in Taiwan, is a small company with only  P625,000 in capital, yet it was awarded the most pandemic contracts worth P10 billion, courtesy of the Procurement Service-Department of Budget and Management (PS-DBM).

Robredo to Duterte gov’t: Why deal with fugitives, businessmen linked to drugs? 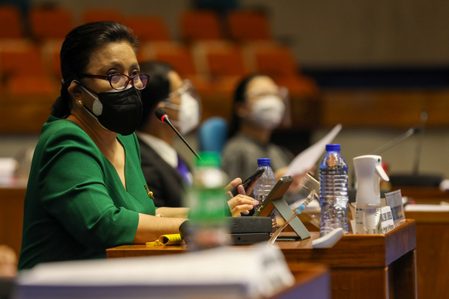 For Robredo, Pharmally’s schemes would not have been possible if they were not in collusion with government officials.

She said the money that people likely earned from the Pharmally scandal could have been used to pay health workers and finance medical equipment of hospitals now overwhelmed by the more infectious COVID-19 Delta variant.

(This Pharmally scandal would not have happened without the help of government officials. This is what hurts the most, Ka Ely. So many of our countrymen are dying right now.)

(We have a lack of health workers in hospitals and our medical equipment is not enough. If the profits from this had gone to the healthcare system instead, then so many lives would have been saved.)

Despite the glaring evidence being uncovered by senators during the Pharmally hearings, Duterte continues to protect Yang, Lao, and Go. The President has since directed his wrath at the Senate and Gordon, the man leading the investigation who has described Duterte as a “cheap politician.” – Rappler.com